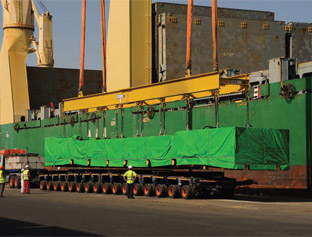 Transforming transport 01 September, 2014 Scheuerle’s new STB550 was picked up by Lincoln Collett, technical director of Collet Heavy Transport. Will North spoke to his brother, managing director David Collett, about why the company chose this system.

Rigid and flexible, light and heavy 28 August, 2014 This summer, TII’s Scheuerle division invited press and clients to the handover of its biggest ever bridge girder, the STB 550, to the UK’s Collett Transport. Will North spoke to TII Sales president Bernd Schwengsbier about the company’s record of innovation.David Collett explains why his company chose the STB550, and we look at it’s first job.

The impact factor 27 August, 2014 Goldhofer’s Innovation Days customer event this year gave the company a chance to show off new products, including a new 60t SPMT, a transporter with an expanding wheel base, a new axle system for its semi-trailers, and the firth of its Faktor 5 bridge girders. Will North reports from the event.

From factory floor to shipyard 04 December, 2013 When it comes to special transport, its easy to only focus on those projects involving thousand tonne moves. Often overlooked are jobs that involve less weight, but are equally challenging for other reasons such as restricted space. In this article Zak Garner-Purkis looks at those jobs where precision is as important as power.

Transport trailblazers 21 September, 2011 On both sides of the Atlantic, special transport firms are awarded each year for their safely and cleverly overcoming the obstacles of moving loads. This passing April and June, ESTA and SC&RA awarded five trailblazing transport companies for an outstanding achievement in the hauling category: ‘Job of the Year’

Transportes Montejo 20 September, 2011 Transportes Montejo, a logistics firm managing special cargo transportation and lifting with cranes, has been ranked the 55th largest transport company in the world, with five facilities in Colombia, Panama, Venezuela, and the USA.