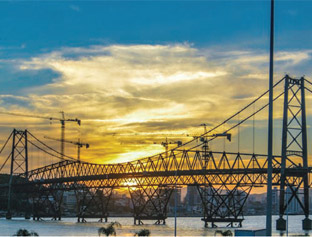 Sponsored: Latin American giant 21 December, 2016 Locabens is the leading tower crane operator in Latin America and boasts the largest and newest fleet in the region. The company, now based in São Paulo, was founded in the 1960s by Afonso Carvalho who started out as a representative of a construction hoists manufacturer in 1955. > read more

Latin America Project round up 11 February, 2014 This month we review projects from Mexico, Colombia and Brazil.

Racing to Brazil 23 August, 2012 Brazil’s historically unpredictable approach to infrastructure means it has to gear up for the 2016 Olympics and the 2014 World Cup. Kevin Walsh looks on as the crane industry lends a hand.

Caracas, Venezuela
Venezuelan state owned petroleum company PDVSA has ordered 76 flat top cranes from Terex, for use on a project to build 50,000 new homes a year. Half of...

Market blossoms for Brazil towers 20 June, 2008 São Paolo, Brazil's housing market is booming, in contrast to the situation 4,000 miles northeast in Miami, and local companies are scrambling to keep up with demand, reports Will Dalrymple