A change for the better

On October 8, Tadano announced the start of a strategic restructuring programme for its two German subsidiaries, Tadano Demag GmbH and Tadano Faun GmbH.

Earlier that day the two subsidiaries, in close consultation with Tadano Ltd. and with professional advisors, filed for Protective Shield Proceedings (“Schutzschirmverfahren”) pursuant to §270b of the German Insolvency Directive.

Protective Shield Proceedings are a German judicial restructuring procedure, which provides companies in distress with a chance to stabilise their business while staying in control of their operations.

Commenting on the filing of the Protective Shield Proceedings, Tadano said that economic challenges for the German subsidiaries escalated considerably in recent months due to the Covid-19 crisis and cannot be sufficiently mitigated, despite proactive measures taken.

CEO of Tadano Demag GmbH and Tadano Faun GmbH, Jens Ennen says the companies have taken several measures during this period: “Short time work was one of them. We also temporarily halted production at our Lauf and Zweibrücken sites, while all Tadano Faun and Tadano Demag employees had approved a voluntary agreement stipulating a general company holiday in the last week of March.”

The Covid-19 pandemic also caused interruptions with the supply chain, as the production of components by external suppliers was affected.

“It is no secret that our AC cabins, for example, come from Italy, which was affected early and very severely. And many suppliers in other countries— including Germany—had also closed their plants. Since the beginning of May, we have been gradually ramping up production again.”

Despite the economic challenges, the two German companies do not have solvency issues, as Protective Shield Proceedings can only be applied to companies that are solvent and for which a successful restructuring is likely. A few hours after the companies’ filing, the request was approved by a court.

During Protective Shield Proceedings, companies draw up a dedicated restructuring plan with some temporary regulations coming into effect to make it easier for companies to reorganise. “Temporary regulations include for example the fact that the wages and salaries of the employees at Tadano Demag and Tadano Faun are secured for the first three months of the Protective Shield Proceedings. During this time, the wages and salaries will be covered by the Federal Employment Agency,” says Ennen.

He explains the next steps of the process: “In the course of the Protective Shield Proceedings of Tadano Demag and Tadano Faun, the management team will work with the general representative to develop a dedicated restructuring plan over the next three months in order to reorganise the two companies and tackle their current economic challenges. At the present time we cannot make any statements about individual operational measures, let alone their implementation.”

Ennen believes that the reorganisation will lead to an “optimised organisation” and boost efficiency. He adds that the company will be able to serve the customers’ needs even better through its products and services, which will further enhance its competitiveness.

“Basically, all measures are geared towards responding even better to the needs of our customers and offering them greater added value than ever before—both with market-leading, innovative products and in the service business. To this end, we intend to further optimise our production processes; for example by shortening throughput times, so that we can deliver our cranes to customers even faster.”

The production at the Tadano Demag and Tadano Faun factories is ongoing and the company reassures customers that all existing and new orders are being fulfilled.

In spite of the negative effect of the pandemic on the crane rental market, Tadano Demag has been receiving orders. “Even at the peak of the Covid-19 crisis which was basically from mid-March to June for Europe, we continued to register orders. It’s not as if the construction industry has completely shut down. Many of our customers have continued to work and we continued to receive orders. Some customers have also asked for delivery at a later date. However, this is all within reason. The bigger problem were the supply chains, which are now resumed,” says Ennen.

The Demag brand’s base has always been in Zweibrücken, where Christian Dingler set up a mechanical workshop in 1827, almost 200 years ago. The Wallerscheid factory opened in 1990, where Tadano Demag City cranes and all terrain cranes up to 300t are manufactured. The brand’s higher capacity all terrain cranes and the whole crawler crane line are manufactured at the Dinglerstrasse factory. There is a team of 1,600 people working in Zweibrücken.

The Tadano Faun factory is based in the town of Lauf an der Pegnit, over 300km away. A team of 700 people is working there.

Since the integration of Demag into Tadano, there has been strong collaboration between the employees of the two brands.

“The employees of both Tadano Faun and Tadano Demag plants work hand in hand. There is a lively exchange in production. We also take the opportunity to evaluate processes in both locations. This is a good opportunity to find out how we want to work together in the future. Sometimes one location has a better process, sometimes the other. We combine this—the best of both worlds, so to speak,” Ennen says.

There has been integration of the sales and customer support structures for Tadano and Demag in Germany and in many other countries and regions. The latest such move was announced in early October, that as of January 1, Tadano Demag UK Ltd will be integrated within Tadano UK Ltd.

The latter will become the sole representative of the Tadano and Demag brands for the UK and Republic of Ireland markets.

To the question as to how the integration of these structures has been, Ennen answers: “In fact, we are already much further ahead than we thought. The sales and service organisations are united and harmonised in most regions.

This applies to many European countries, such as the DACH region (Germany, Austria, Switzerland), but also in America and Australia; customers now receive Tadano and Demag products from a single source.

“Integration is also progressing ‘behind the scenes’: In purchasing and product management, for example, we have merged the organisations and adapted structures.

“The acquisition of Demag mobile cranes was a major, strategic step forward for Tadano, made to offer significantly more benefits to our customers’ lifting equipment needs. And our focus is to be our customers’ preferred choice when it comes to their next lifting equipment purchase and to continue to deliver the superior level of support they expect.”

At the factory in Zweibrücken there has always been a strong focus on innovation, not only on the actual machines but also on the technologies. The IC-1 Plus control system is one of such technologies that have been greatly appreciated by the market.

Part of the IC-1 Plus control system is the recently introduced Flex Base stepless outrigger system. Flex Base was first developed for the AC 45 City, but earlier this year the manufacturer incorporated it to its AC 55-3 and AC 60-3 cranes.

Frank Schröder, director product management all terrain cranes, says that the Flex Base increases the versatility of the Tadano Demag cranes. “At any jobsite customers can move the outriggers to the maximum possible extension and benefit from the higher lifting capacity.

Especially when working on confined construction sites like inside buildings or in city centers, customers can benefit from Flex Base. There are no longer fixed positions which our customers need to work with. This results in higher lifting capacities whenever customers can extend the outriggers a bit more than the given fixed positions of 360° load charts.

Schröder tells Cranes Today that there are plans to incorporate Flex Base in other models, but more information about this will be communicated next year.

The IC-1 Plus control system as well as the IC-1 Remote telematics system technology are for the first time features on a Tadano-branded machine, the GTC-1800EX telecrawler.

This model was designed and built in Zweibrücken before the Demag acquisition, and was presented at Bauma 2019 as Demag TCC 160. It has been officially re-launched as Tadano GTC-1800EX this October.

The machine has a maximum capacity of 156t, a maximum load moment of 590mt and a 60m main boom. Main boom extensions with lengths of 5, 11, 17, and 23m that can be mechanically and hydraulically offset are available, meaning that a maximum system length of up to 83m is possible.

Vincent Stenger, product manager telecrawlers at Tadano Demag, says that the first units have already been produced. As for the machine changing brands, he comments: “There are good reasons for including the telescopic boom crawler crane in the Tadano brand; Tadano has a long tradition with these products and a very strong line of telecrawlers. This makes the integration of the crane from Zweibrücken into the Tadano portfolio an ideal addition and consistent, from a technological point of view.

“The decision to include this crane in the Tadano brand is also a logical step in terms of corporate strategy with the goal to become ‘One Tadano’. This will be a great opportunity for German and American colleagues in the Tadano Group to learn even more from each other and share best practices in the future. The group can take advantage of synergies and the ‘best of both worlds’ can flow into the development of new products.”

Tadano Demag is committed to enhance its product offering in the near future. “What we can say today is that despite the difficulties that may have arisen in recent months, we have never stopped our innovation engine, one of the pillars of Tadano Demag, and you will very soon find out more about several new models,” says Ennen.

An AC 220-5 crane on the assembly line. Schröder says there has been a strong interest for the 220t class over the past two years, with both Demag AC 220-5 and Tadano ATF 220 5.1 products being very popular.

An aerial view of Tadano Demag’s Wallerscheid factory in Zweibrücken. Tadano Demag City cranes and all terrain cranes, from the AC 55-3 to the AC 300-6, are manufactured there. 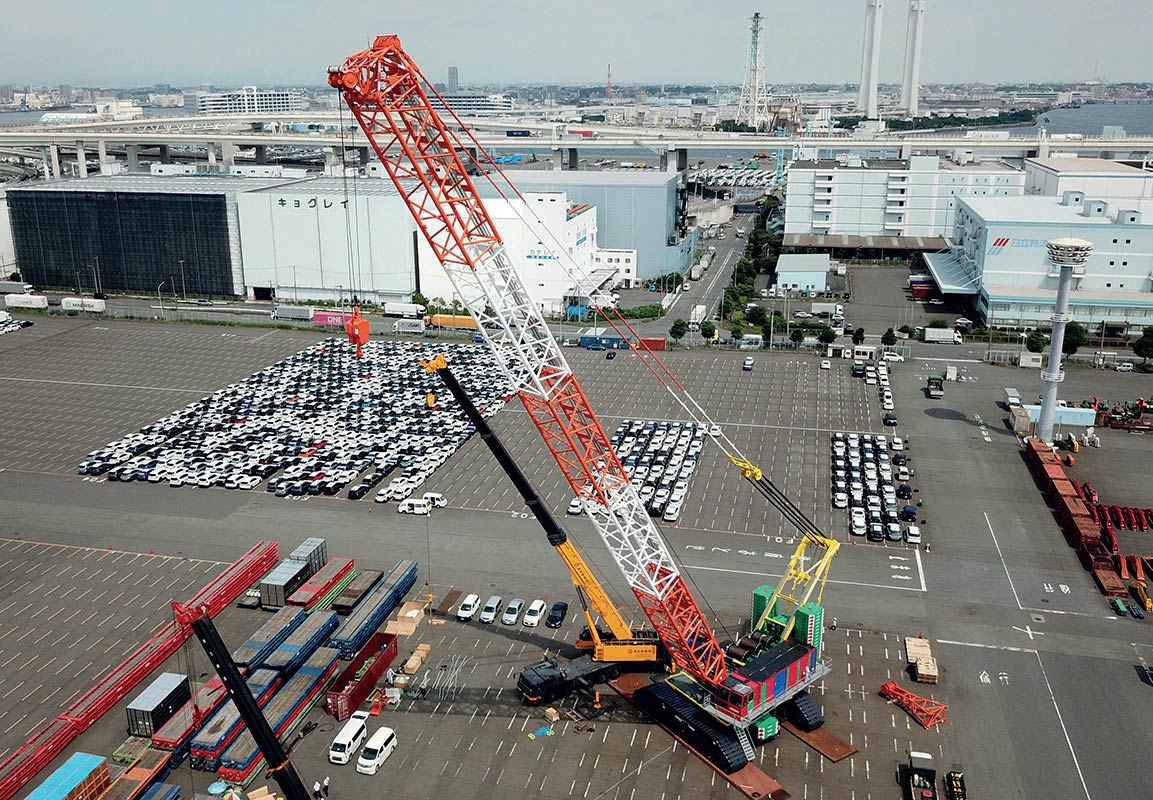 Japan’s MIC Co. has recently taken delivery of its fourth Demag CC 8800-1 crawler crane. Talking about the crawler crane market, Ennen tells Cranes Today that there has been an increased volume of enquiries for Tadano Demag crawlers. 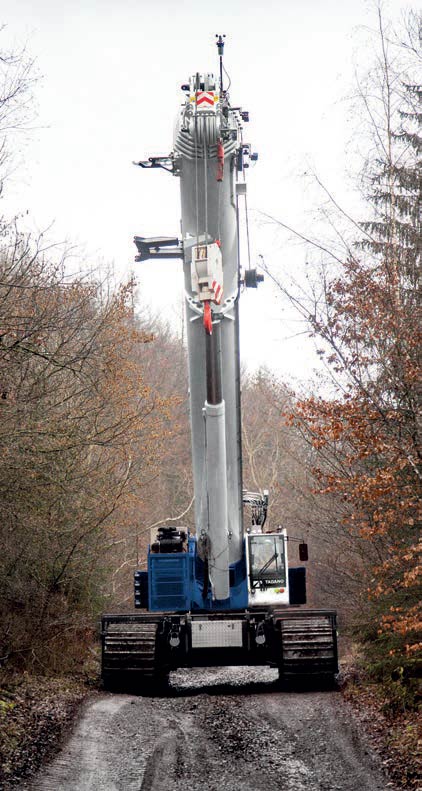