Designed to withstand avalanches and wind speeds of up to 220 km/h, two freestanding Wolff tower cranes will remain fully erect on an alpine job site for the next four years.

The existing dam wall is around 90 years old and will be replaced by a new one by 2025. The old wall is first being renovated. It will later be flooded once the new wall has been built. The new wall is designed to provide an unrestricted supply of hydroelectricity.

Two freestanding Wolff 1250 B luffing jib tower cranes, from Switzerland-headquartered tower crane manufacturer Wolffkran, will work on the project for the next four years. A key job for the cranes will be to pour concrete from 20 tonne skips into formwork to create the new dam.

The cranes will remain erect for the full four-year period and so will be subject to the harsh alpine environment, as the site is approximately 1,900 metres above sea level.

The cranes will remain in situ because dismantling them, transporting them, and storing them each winter would be unpractical and uneconomical.

In order to withstand the harsh mountainous conditions, which in winter could mean wind speeds of up to 220 km/h, avalanches, and heavy ice, Wolffkran has used 14 XXL TV 60 tower sections specially developed for this project.

The XXL sections have a length of six metres compared to the standard TV 33 tower sections of 3.3 metres.

CRANE COMPONENTS DELIVERED ON A JUST IN TIME BASIS

Erection was completed in just two weeks by an eight-strong Wolffkran team. Due to the constrictions of the jobsite the majority of crane components had to be delivered on a ‘just in time’ basis. This involved 70 trucks reaching the site via a winding mountain pass road.

The confines of the construction site also posed a challenge for the erection team which used a 500-tonne and 150-tonne mobile crane to preassembly components on the ground.

To connect the different sized tower crane sections Wolffkran developed a VR 3360 connecting frame. It also developed and utilised the TV 33 S – a reinforced version of the TV 33 specially made to meet the high static requirements at the transition from the connecting frame to the TV 33. These high forces can be created by the loading effect of ice, snow, and wind.

“Iced surfaces and the like are known as ice flags on the slewing parts and towers and must be factored in as additional wind surfaces,” explained Rolf Mathys, managing director of Wolffkran Schweiz. “Furthermore, snow and ice are literally heavy and therefore statically relevant.”

To provide the required stability for each crane, specially manufactured foundation anchors and over 600 cubic metres of concrete have also been used.

Wolffkran says this is roughly ten times the amount of concrete used for an average crane’s foundations.

“Tie-ins on the rock massif or on the dam were neither a technical nor economical alternative,” added Mathys. “Freestanding cranes with a maximum lifting capacity of 20 tonnes in one-fall operation and a tip load capacity of 11 tonnes at a jib radius of 75 metres that have to withstand wind speeds of up to 220 km/h, avalanches, and icing were simply not feasible with the regular Wolff tower system and standard calculation for the Wolff 1250 B. Everything needed to be recalculated from scratch. On the Grimsel, we are dealing with conditions that are entirely different from those of a standard construction site.”

Construction work will be carried out in double-shift operation in order to fully utilise the short construction window before the renewed onset of winter. The crane operators for this job received extensive training from Wolffkran.

To maintain access to the cranes, even when the mountain pass is closed due to snow, Wolffkran (in conjunction with a cable company) installed a cable system between the existing (old) dam and the cranes.

To prevent the slewing parts of the cranes from freezing solid, the slewing gear drive and motors are equipped with heating pads. The switch cabinet and cabin are also heated, and the slewing ring, hoist, and luffing rope are all greased before cold spells.

An automatic rotation program will be carried out two to three times per day to loosen the icing – a process Mathys poetically described as “a crane ballet without spectators”.

“It’s a major endeavour but it is still much more economical than disassembling and removing the cranes every winter and reassembling them again in the summer,” Mathys concluded. “I am confident that our Wolffs will manage their high mountain tour well. We have intensively prepared for everything and are already in the planning stages for another high alpine project.” 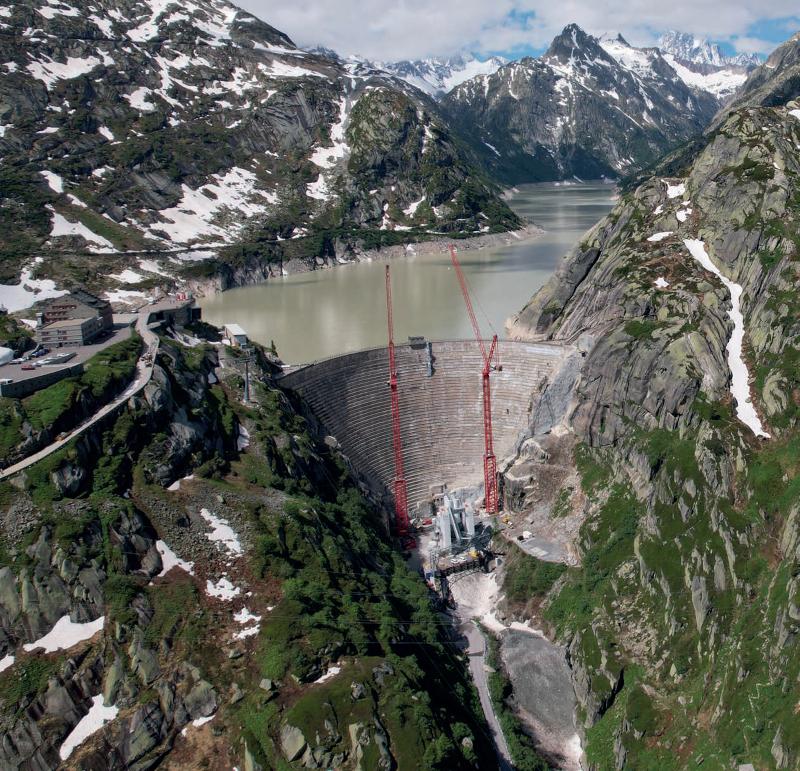 The two Wolff 1250 B luffers were assembled in just two weeks and will be on the jobsite for the next four years. © videobilder.ch 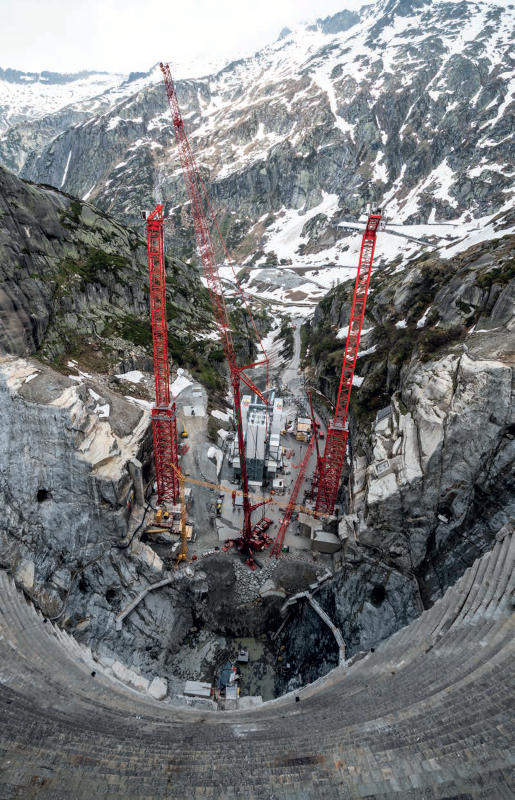 The assembly of the two Wolff cranes took place in restricted space using a 500 tonne and a 150 tonne mobile crane. © Grimselfoto.ch, D. Bürki 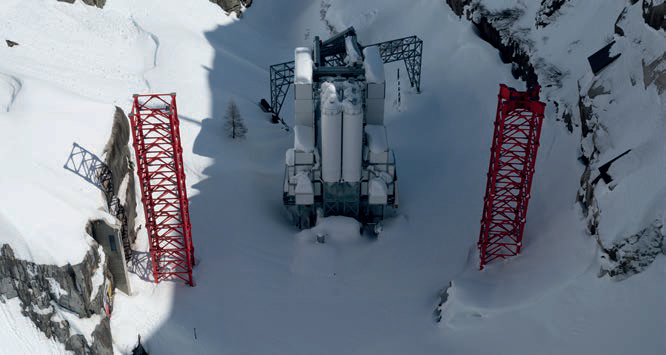 The new TV 60 tower elements have passed their first winter test at an altitude of around 2000 metres. They were installed late in the summer of 2020. © Grimselfoto.ch, D. Bürki 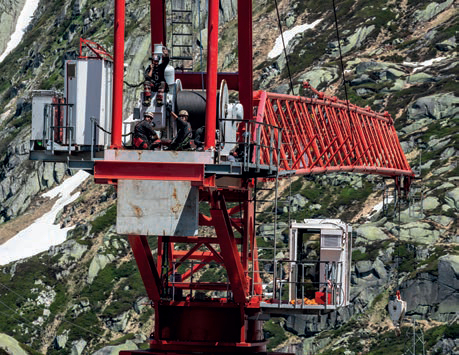