As NASA's specialised shuttle lifting gear is only available at each of their space centers, at the Smithsonian National Air and Space Museum a CC 2800-1 was needed to lift the 89t shuttle from the back of its 747 Shuttle Aircraft Carrier (SAC) and position it on the ground for towing into its final resting position.

It consisted of two lifts, one to remove the Discovery from its SAC, the other to place the Enterprise space shuttle -- whose place the Discovery would be taking in the Smithsonian -- onto the SAC for transport to New York.

In the final stage of the lift the crane held the Discovery a few feet above the ground so that the United Space Alliance crew could use the shuttle's auxiliary hydraulic power to lower its landing gear before placement.

Barnett added: "It was a one-of-a-kind experience."

...to royal rowing boats
Ahead of the Queen of England's Diamond Jubilee in June, Ainscough was hired to provide a 150t Liebherr LTM 1150-6.1 to lift a secret gift for the Queen into the River Thames.

Its construction arranged by the Prince of Wales and the chairman of the board of trustees for the National Maritime Museum, the Gloriana is the first royal row barge to be built in the UK in over 200 years.

Prior to the lift maritime project management specialists Byrne Longshore & Co. helped Ainscough to organise the weighing and loading of the barge before its transport to the launch site.

Ainscough's special projects manager Bob MacGrain commented: "Close co-operation was needed between ourselves, the boat builders and the local highway engineers to find a suitable location to execute the launch, which had to be carried out in a very short tidal window with minimum disruption to traffic through this busy area of London".

The Gloriana eventually led a flotilla of more than a thousand ships down the Thames at the beginning of the celebrations.

MacGrain added: "It has been an honour to work on such a prestigious project." 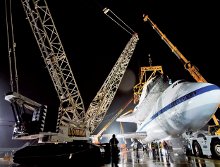