Boom in and out

The Kelly Group was founded in 1983 as a general contractor and sheet metal fabricator. Today it operates and employs five metal fabrication facilities and serves the agribusiness community and other industries including chemical plants, paper mills, and manufacturing facilities in several states.

In a little over seven months, the TCC-2500 logged 1,650 working hours, travelling a distance of ten miles working around a railroad discharge facility in an agro-refinery complex. The rail line is flanked by silos and tanks with rooftop walkways, conveyors, and enclosed motors.

“When the trains came in or went through, we retract the boom, walk it over the train tracks to the other side, let the train cars come by, and then go back to the work location,” Ron McCoy, crane superintendent for The Kelly Group said. “We walk it in, set up, boom out, do the picks, pull the boom back in, and walk it out several times a day.”

The tallest tank, a 150ft (45.7m) corn tank is being dismantled and removed in sections weighing up to 1,500lbs (680kg). In some instances, the radius for removing sections of the old corn tank is up to 265ft away. These lifts were completed by fully extending at 223ft and erecting 117ft of offset jib at 45° to reach the farthest corners of the 80ft in diameter corn tank.

“Anything else was not really feasible. A big crawler crane did not have the space to be erected and to lay it down when needed. With a truck crane, it would have to be a much larger capacity rig, over 500USt capacity. We could have retracted the boom, and lift up the outriggers, but then have to tear all the counterweights off, (to reduce ground pressure thus losing time), then move it across the tracks. This would be at least twice a day. So the TCC-2500 was extremely helpful. We figured out that we saved over $800,000 during this project just because of that crane, and that is a conservative estimate,” said McCoy.

The Kelly Group and Ron McCoy were faced with a situation of getting a 110,000lbs new vessel to a renovated area. The special heavy haul tractor/trailer could only get within 50 yards of the lift/ placement site. The 250USt crane off-loaded the large vessel and carried it to its final lift destination, including making a 90° turn around the building where the container would finally be placed. 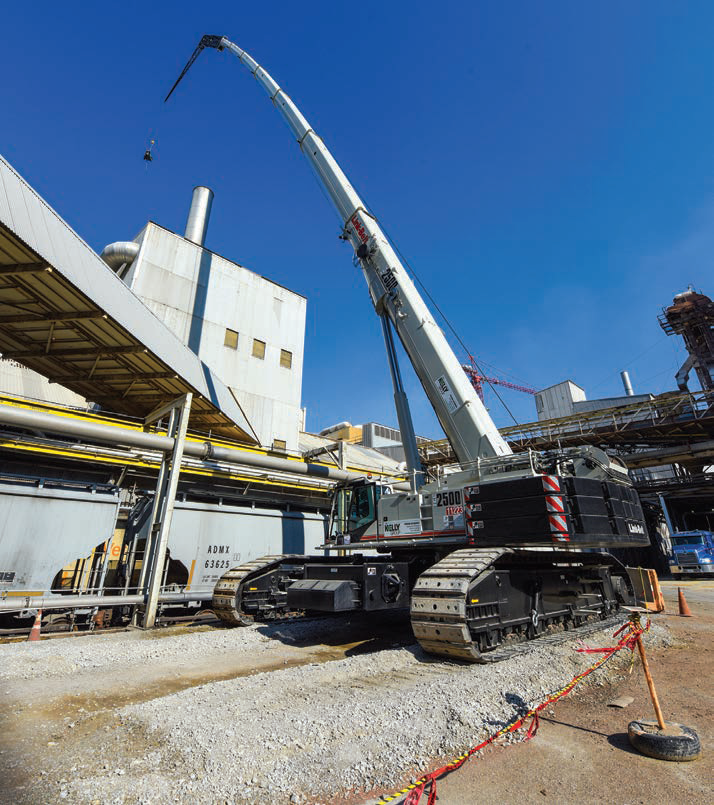 TCC-2500 with full boom and fly extension in Illinois for Kelly Group.