The Potain cranes built two of the bridge's four pylons, each of which has 24 exterior sides and 36 interior sides, forming a unique S-shape structure. This technical arrangement made construction all the more complicated. The cranes lifted a wide variety of construction materials, including formwork and steel structures, in loads that tested their maximum capacities, which ranged up to 16t.

To ensure the cranes operated at maximum efficiency for the long hours required at the project, Manitowoc Crane Care worked with the site. At one stage, the customer support division delivered components and parts to the job site by helicopter, to ensure the project stayed on schedule.

At 310m high the six Potain tower cranes endured the full force of Hunan's subtropical climate during their 30-month posting at the Chishi Grand Bridge. Monsoon rain and extreme humidity were among the challenges at the job site. The manufacturer said that on the job communication between ground crews and operators was crucial because the cranes were often hidden in the clouds, with no view of the ground below.

CRMBEC is the main contractor on the project, which at 70m wide will be one of the widest cable-stayed bridges in the world. CRMBEC owns and operates the Potain tower cranes used on the project and the company has enjoyed a long relationship with Manitowoc.

The cranes spent two-and-a-half years building the pylons at the bridge, which will span 1,470m and carry its road deck 180m above the ground. The bridge will open at the end of this year. 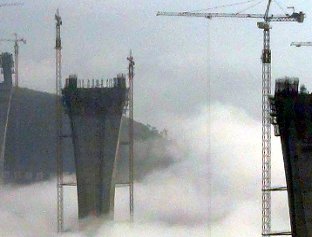