China projects round up

Due to the restrictions of the job site, a SHW superlift configuration was used, with a 102m main jib and a 54m tower auxiliary jib. The crane had a working radius of 41m, with the workload totaling 90% of the rated load.

The project involved lifting the platform leg to a height of 100m, and represented the first time the XCG2800 crane has been used in a maritime job, opening a new chapter for large crawler cranes, says XCMG. High and heavy legs are the most important part of ocean oil boring, added the company, and require high levels of accuracy in an unstable construction environment.

Macau
A total of 11 flat-top tower cranes are being used by Leighton Contractors (Asia) to assist the construction of the Wynn Palace luxury resort development in Macau.

The complex is located on the 'Strip' in Cotai, a 5.2km2 area of reclaimed land devoted to leisure, gambling and tourism, and is due to be opened in 2016.

The 11 18t cranes were all sourced from Comansa CM, the sister company of Spain's Linden Comansa in China. The ten 21CJ290 cranes and one 21CJ400 were supplied by Hong Kong-based Proficiency Equipment, the official dealer of Linden Comansa in the region.

Challenges of the project included relocating some of the crane during the project, and seven of the cranes having to be climbed in stages - five using an internal climbing system and two using a hydraulic climbing cage.

Jiangsu
Zoomlion's 3,000t ZCC3200NP crawler crane was used at the Tianwan nuclear power station at Jiangsu in late September, representing the second time the crane has been employed at the site.

It lifted the shell dome for the fourth power unit at the site - the heaviest shell dome in the world, says Zoomlion. The dome, which has a diameter of 44m and height of 22m, weighs almost 500t and was lifted by the crawler in less than two hours after hoisting, luffing, travelling and hook-drop.

The ZCC3200NP was first employed in December 2014 to lift the dome at the third power unit at the Tianwan site.

The crane was also used earlier this year at the Shidao Bay nuclear power station.

The four cranes are each equipped with a compact 355 IC tower section, with the crane configuration -- being used for the first time - halving the number of cranes initially specified.

The Hong Kong Housing Authority apartment development is being constructed on the site of the former Anderson Road Quarry, in Sau Mau Ping, in the Kwun Tong District of eastern Kowloon. Yau Lee has been contracted to build nine tower blocks, each between 29-41 stories high.

"Originally, the intention had been to use eight cranes on Yau Lee's contract, with two on each tower block," said William Tang, sales manager at Liebherr Singapore.

"However, we were able to demonstrate that by using four Liebherr 550 EC-H models, equipped with the 355 IC tower to fit into the limited space of the lift shafts, the contractor could actually speed up the work process, meet all the heavy-lift requirements, and save money on labour and equipment costs.

"The 355 IC tower section is exceptionally compact at a cross-section of 1.9m by 1.9m, and the crane will climb as the building climbs.

"Having eight jibs on the four blocks would have limited the mobility of the cranes, because of the need to prevent the jibs from colliding. One crane on each tower means there is total freedom of movement, and with 51.5 m jibs fitted, the cranes can reach any part of the tower construction area. 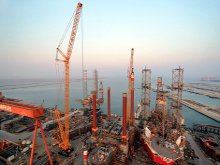 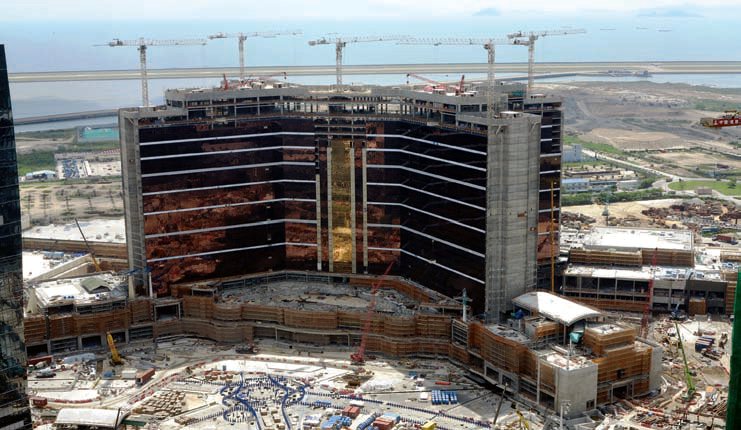 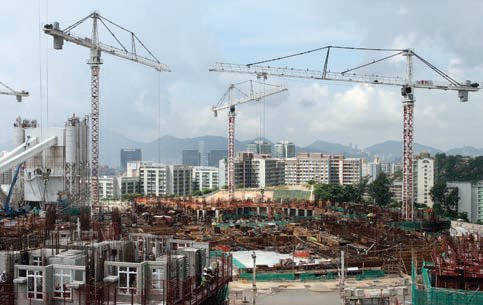 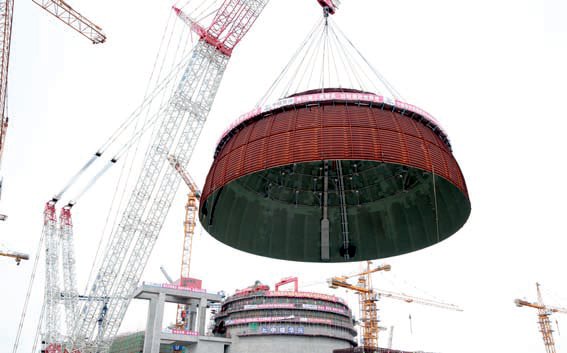