When the world’s biggest tunnel boring machine broke down 120ft underground, Mammoet was called in to retrieve it.

To make necessary repairs and replace the main bearing, STP chose to excavate an access shaft along the alignment rather than performing the work in the tunnel.

"Crews completed excavation on the 83ft-wide circular shaft, 120ft (37m) deep on January 30, and then built a concrete cradle on the bottom to support the TBM upon reception. STP advanced the TBM in late February into the access pit for disassembly.

"'The industry keeps moving forward with larger and larger tunnels,' said Chris Dixon, STP's project manager. 'The tunnelling industry is watching this project very closely so everybody is doing their part to make all of this happen as quickly and safely as possible, so that we can resume tunnelling as soon as possible.'"

With the project stalled, heavy lift engineering specialists Mammoet were brought in to bring the broken parts of Bertha to the surface for repairs.

To reach the machine and make the repairs it was necessary to create a deep, concrete-lined shaft down to the cutter. Mammoet then lifted the cutting drive unit (CDU) out through the shaft from its underground location. Once raised to the surface, it was rotated and skidded onto a pre-constructed repair support system.

A range of engineering problems were overcome during the project. The lifting of the heavy CDU was complex due to its difficult shape and asymmetrical weight distribution.

Weighing 1,700t and with a diameter of 17.5t it is a huge component to lift. The site itself also presented challenges, next to a highway, over a 120-feet-deep pit and in a location with complex soil stability requirements.

To carry out this tricky, precision extraction, a special gantry mounted on a skid system was designed to lift the heavy tunnel cutter. The gantry is supported on twin rows of concrete pillars. Originally these piles were designed to stabilize the surrounding soil while tunnel boring took place. Using the pillars as solid foundations the gantry was constructed across the wide span. Mammoet's engineers developed the design in just four weeks. Using steel beams from Mammoet's fleet of heavy lifting equipment they constructed a specialized modular tower which could safely support the forces exerted by the weight of the load.

The concrete foundations were not designed to support a load at height and while making calculations for the design of the gantry Mammoet's engineers identified that the uneven loads had potential to create torque in the concrete piles.

They solved this potential problem by devising a hydraulic equalization system to place under the tower.

Comprising 48 hydraulic cylinders, the system was designed to help the gantry withstand wind and tail forces when skidding.

Using the principle that fluid in the hydraulic system disperses the weight of the load equally and in all directions, the tower becomes effectively 'self-balancing'. It is the first time a gantry has been developed which is fully supported by hydraulics.

With many surveyors and engineers on site to monitor ground movement and ensure the safe extraction of the CDU, it took around 16 hours to lift.

More leveling work took place the following morning. Now that the CDU has been brought to the surface, the remaining repairing and lifting operations are aiming to get Bertha back to work as soon as possible. Once the repairs are completed, the CDU will be maneuvered, with millimeter precision, back down the shaft and reinstalled in the machine ready to complete the tunnel. 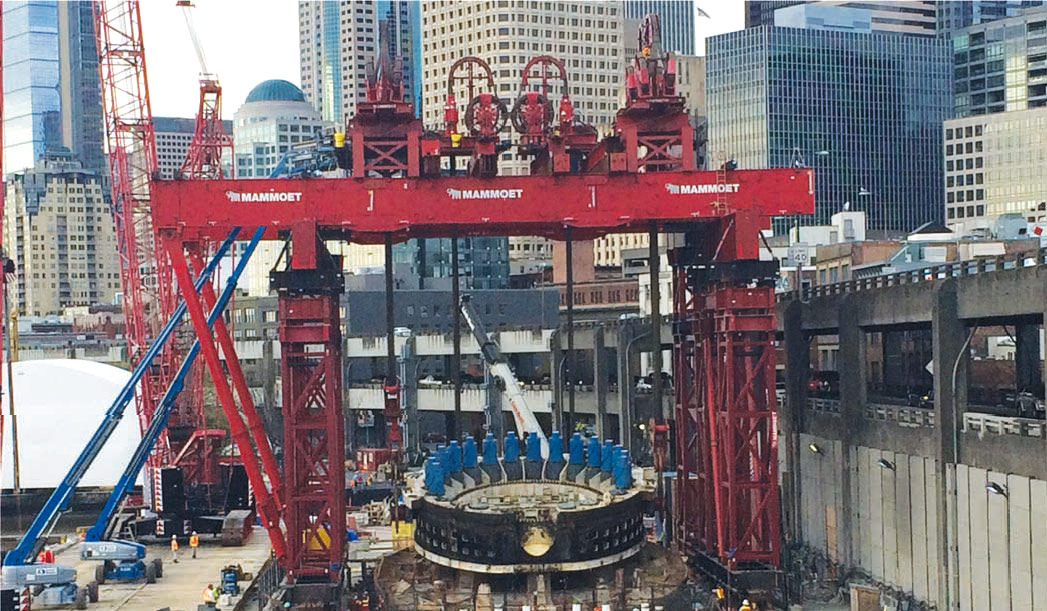 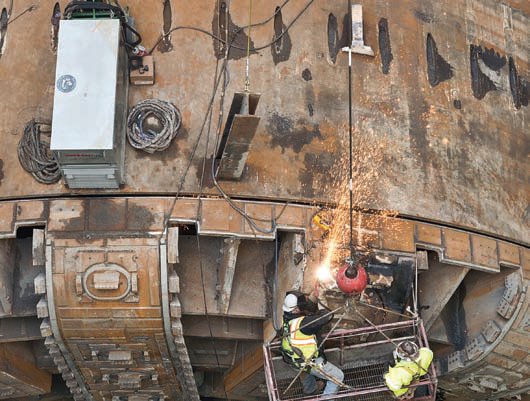 A welder cuts off one of the SR 99 tunneling machine’s cutting bits in March 2015. The cutting bit will be replaced temporarily by one of several lifting hooks that will allow crews to lift Bertha’s cutterhead and the cutter drive unit in one piece to the surface for repairs. 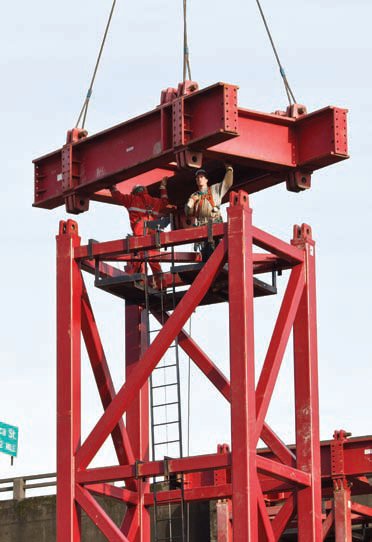 Workers guide one of the vertical pieces of the modular lift tower into place. The tower will hoist the front end of Bertha, the SR 99 tunneling machine, out of the ground for repairs. 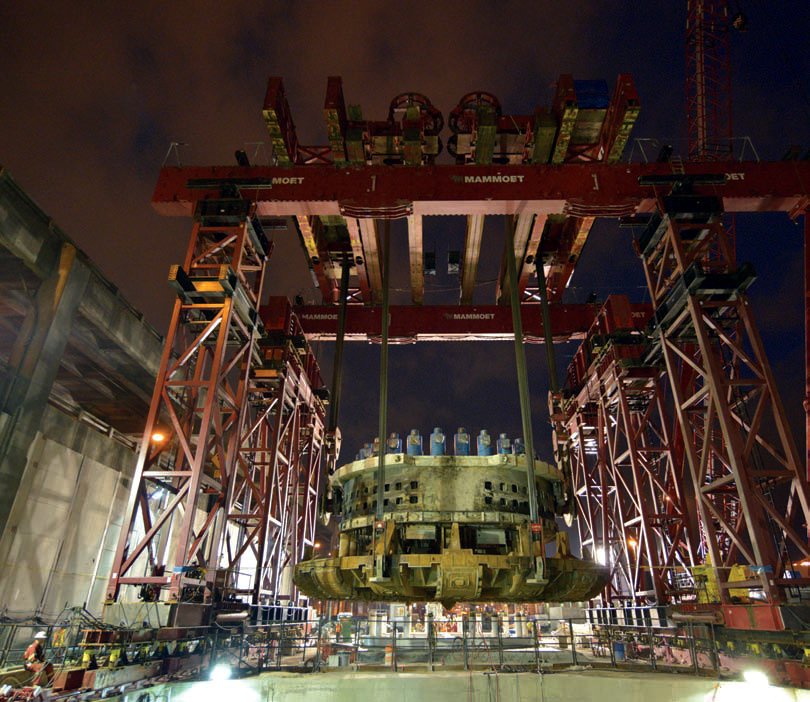 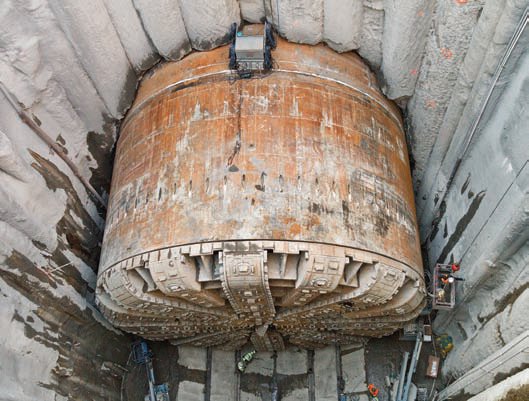 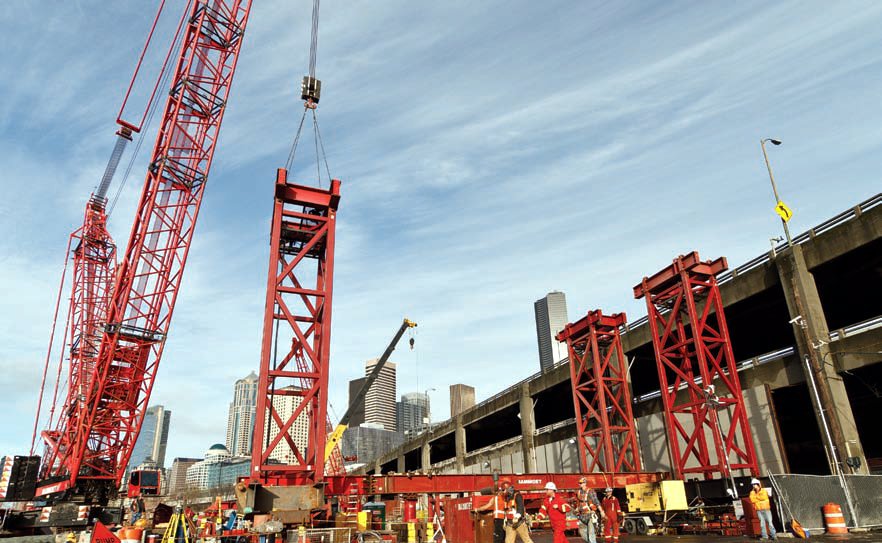 On Dec. 9, 2014, crews started installing the vertical pieces of the modular lift tower that will hoist the front end of Bertha, the SR 99 tunneling machine, out of the ground for repairs.