The relationship between Nooteboom and the crane industry goes back to 1936, when Anton Nooteboom built a hydraulic crane on a Ford V8 chassis.

In the fifties, the company expanded its offering with the introduction of low-loaders. It built its first low loader in 1953, to meet the demand for construction machinery transportation to Zeeland, for the province’s reconstruction after a severe flood. When the next order was received, Anton Nooteboom had the idea to equip the low-loader with axles that could swivel. The first lowloader with pendle axles was born.

Ten years later, the company decided to sell its crane production and concentrate in abnormal road transport. However the close relationship between Nooteboom and the crane industry remained, and two decades later, it resulted in the development of a long-lasting product: the Nooteboom ballast trailer.

In the eighties, the capacity of mobile telescopic cranes increased significantly and so did the weight of the ballast. In 1980, the heaviest telescopic cranes needed no more than 40t ballast and this could be carried on one trailer. With the introduction of the Liebherr LT 1300 and the Krupp 350 GMT, the weight of the ballast rose to 60t. To transport this large weight the load had to be divided over two trailers. In 1985, Jan van Seumeren Sr. together with Dick Nooteboom came up with the ballast trailer in order to efficiently transport the higher weights.

Van de Logt says that the innovation lead to the change of the law for transporting cranes in Holland and later in Europe. The new law allowed for a total weight of 100t in total weight for trailer, truck and load.

The latest addition to the ballast trailer programme is the MPL-97-06 with pendle axles. This Manoovr semi low-loader with fixed load floor has a rated load capacity of 12t/axle and is therefore an important alternative for the transport of crane ballast on the 100t road network. The Manoovr is shorter than the sevenaxle ballast trailer and the load floor is lower.

Van de Logt says the crane industry is one of the most important market segments for Nooteboom. The company’s latest innovation—4+6 low-loader combination, type EURO-147- 46(ICP)—is also relevant to the crane industry, as it can be used to transport cranes.

The first unit was bought by C. Zwagerman Transport from Nederhorst den Berg, the Netherlands. This combination has been optimised for German regulations: an axle load of 12t at 80kph, so that loads of 100t can be transported efficiently in and to Germany.

“A lot of Dutch special transport companies drive to Germany. In Germany they do not want to have that much payload on the axles, so there is a rule that there needs to be a longer axle distance. Also to move around in Germany a permit needs to be obtained for each federal state,” says van de Logt.

In order to adapt the lowloader, as far as possible, to comply with the German regulations for exemptions, the axle distance has been increased by 15cm to 1.51m. In practice this means that due to this larger axle distance, which minimises the load on bridges and viaducts, the exemptions in the various federal states of Germany are easier to obtain. “Bigger axle distance is becoming popular in many countries, even the Mega Trailer without pendle axles is going up to 180cm,” van de Logt adds.

The new 4+6 lowloader combination features a close coupling system, which makes it easy for users to convert the trailer into a tenaxle semi lowloader.

Cor Zwagerman, director and owner of C. Zwagerman Transport, says the cranes and machinery the company transports are getting heavier with time and that this product will enable them to enter a new segment of the market. Some of the components of the lowloader— such as the gooseneck, Interdolly, load floor and axle assembly—are universally exchangeable with C. Zwagerman Transport’s 3+5 EUROPX Nooteboom lowloader.

Van de Logt highlights that the interchangeability offered by the EUROPX line is a major advantage for customers, as they are able to make numerous combinations.

Various Nooteboom products are being used for transporting cranes and counterweight. “For example, the lattice boom parts can be transported most of the times on the normal trailer, but for the really big lattice booms you have to put the parts on a semi loader. To move a crane we provide all the solutions,” says Van de Logt.

“We are working very closely with the crane manufacturers. When there is a new crane coming out, we immediately try to get information about the counterweight and start designing the best counterweight trailer for that crane.”

Beyond the products, Nooteboom has started to provide training through the Nooteboom Academy, which was created in partnership with the VTAS training centre. The Nooteboom Academy offers 13 one or multiday courses, a mix of courses on Code 95 (a risk awareness and safety test that all EU truck drivers must complete), along with other courses for drivers as well as other employees involved in abnormal transport, such as planners and transport escorts.

“We started 1.5 years ago and the demand is extremely high. Innovation is not only about the product, but also about the things around it,” says Van de Logt.

At the time being, the courses are offered only in the Netherlands, but in the future the manufacturer plans to expand the Academy to other markets. It is similar to Nooteboom’s business journey, which became wellestablished locally and then focused on its international expansion, becoming one of the leading manufacturers in its field. 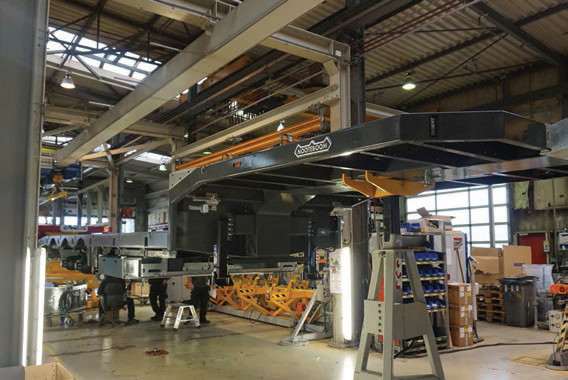