Designing a rough terrain product for the global market is tricky, as requirements and regulations vary from region to region. In order to accommodate these variations, most manufacturers make minor adjustments to their products. One has a different approach.

Wolfgang Beringer, marketing and communication at Liebherr- Werk Ehingen, says they offer the same rough terrain models worldwide. “Just the engine technology is different, depending on the engine emission standards of the markets. We offer our engines with Tier 3, Tier 4 without Diesel Particulate Filter (DPF) and Stage 5 (with DPF) including Tier 4.”

“With that said, we do look at the global markets and review factors that may or may not make a specific model realistic for a specific region.”

Lovera says transportability is a key influencer, as different countries have different requirements that make it difficult to transport a specific model. “So to make one model adaptable to different regions, we may look at different tyre options for example, that may reduce the carrier width. Other examples may be CE conformance to meet EU requirements, Russian certification for Russia, and Cold Weather Packages for cold climates.”

Apart from transportability, other factors taken into account when designing a crane for the global market include the necessary boom length and capacities required for the specific applications the cranes will be used for. The engine technology is a key area of differentiation between the rough terrain cranes operating around the world, as it has to meet local engine emission standards. With the increased global availability of ultra-low sulphur diesel, Manitowoc is seeing an increase in demand for Tier 4 cranes in markets that were previously Tier 3-only. “For instance in Latin America, we are seeing Tier 4 engines being accepted in Mexico, Chile, Peru and Brazil for example,” says Lovera.

Fellow US manufacturer Link- Belt Cranes has eight rough terrains in its portfolio, with capacities ranging from 50USt to 160USt.

Kelly Fiechter, product marketing manager for rough-terrain cranes at Link-Belt says there are differences in the manufacturer’s cranes from region to region. “We start with a base crane build and depending on the crane’s final destination there are certain differences. Maybe it will require a Tier 3 engine or it may have to be changed for CE certification.”

When designing the base crane, at Link-Belt they consider safety, quality and user-friendliness, says Fiechter: “We want the feel to the operator to be the same regardless of where the crane happens to be in the world. We also look at requirements for capacities and boom length.”

Giving as an example the 100|RT and 120|RT models, he says that base components like axles, tyres, and winches are the same wherever the crane is exported to. The same applies for the cameras and Pulse 2.0 operator control system.

Fiechter says there are differences from region to region in the features chosen, with some being more popular in some regions than others: “When our dealers are working with their customers, they can go over the list of options and choose those that suit their needs of that region.”

Terex develops and manufactures all of its rough terrains at its Crespellano plant in Italy, but its machines follow the requests of all markets and are the result of a joint effort between the different Terex teams.

Chris Johnson, North America sales director at Terex, says that there are different parameters taken into account when designing a new rough terrain. “There are two global standards, the ANSI B30.5 for the USA and the EN13000 for the EU. Those standards are not 100% identical, therefore they need to be merged so that any design can comply with either standard.” He adds that the engines on the rough terrains can differ according to what is available in the destination market.

Terex offers nine rough terrain models with capacities ranging from 35t to 90t; two of them (the RT 100US and TRT 80US) are exclusively sold in North America.

“We have a full product line for the ‘Rest of the World’ and we are selectively modifying models for North America,” says Johnson.

"The RT 90 and RT 100US are structurally and mechanically identical. The difference is in the engine tier (EPA v EU) and tyre size. EU uses smaller tyres (26.5) for dimensional access to tight areas. It is important also to underline that the RT 100US standard configuration includes more options to meet the specific customer’s demand, for instance the jib, and the auxiliary winch.”

The TRT 80US was launched at ConExpo 2020. The design concept is the same as the RT100US but it is the first model featuring the manufacturer’s new generation control system Terex Operating System (TEOS). Terex says it will enhance its offering for the North American market next year with the introduction of a 60USt rough terrain.

Tadano has a different approach. The manufacturer has two separate lines of rough terrains, the EX and the XL, which are offered in different regions.

“The concept of machine is also different between EX and XL. We design the EX and XL lines respectively to meet the requests from the different markets,” says Shingo Mizuno, product marketing manager for Tadano.

In North America, Tadano’s RT portfolio comprises 11 XL models with capacities from 15USt to 160USt. The XL line is also offered in the Caribbean, Central American and South American markets but with a different engine. For example, the GR-1000XL for these markets has a Mitsubishi engine which is equivalent to Tier 2.

In Asia, Africa and Middle East, Tadano offers the same EX line models, but the offering for the CIS and Oceania markets differs.

“We specially design the rough terrains for cold areas specification for CIS; therefore, we narrow down the number of rough terrains we offer for that region. Regarding Oceania, we offer the Australian models, GR-130EX and GR-200EX that are designed to comply with Australian Standard and road regulation, in addition to the same RTs lineup as other regions.”

In terms of engine technology, Tadano’s Mizuno anticipates that with the increased global availability of ultra-low diesel, demand for Tier 4 cranes in markets that were previously only Tier 3 will increase. 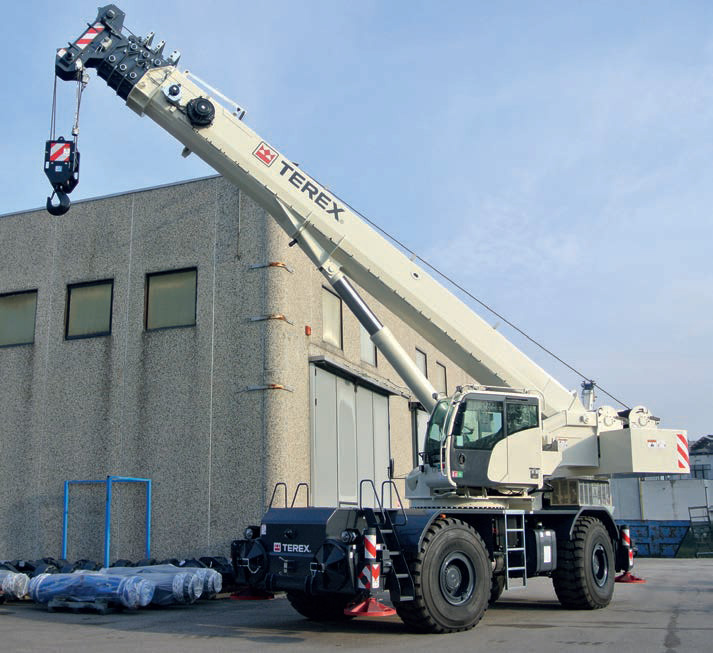