Fagioli saves Venice from the sea

Fagioli has installed a series of gates and caissons designed to protect Venice’s architectural treasures from the Adriatic.

Italian firm Fagioli worked on a complex project known as Modulo Sperimentale Elettromeccanico (Experimental Electromechanical Module) or MO.S.E in Venice, Italy. The project was to construct the integrated defense system composed of mobile gates able to isolate the Venetian Lagoon from the Adriatic Sea when the tide reaches above 1.1m or 3m during heavy rains and announced flood.

The company was required to construct a total of 78 gates to form four barriers. All the gates were 20m wide with lengths varying from 18.5m to 29m and from 3.6m to 5m thick. Each gate was positioned inside concrete caissons.

In normal condition low tide, the gates are full of water and rest in horizontal position inside the caissons.

With high tide, compressed air is introduced into the gates to empty them of water, rotating around the axis of the hinges and rising up until they emerge above the water to stop the tide from entering the lagoon.

To move the caissons across the water to the construction site Fagioli constructed a catamaran composed of two river barges and two crosshead beams. The barges measured 39.2m x 9.7m x 3.82m and weighed 180t each they moved using 2 x 6 axle lines SPMT's to a storage area where they were assembled. A Fagioli gantry lifting system then placed the barges into the water.

To reach the sinking point strand jacks were used to drag the caissons.

Long wires known as "trench axis" showed the route to follow in order to get the catamaran out of the basin and reach the precise sinking point.

Once in position, the caissons were ballasted and sunk using the strand jacks.

The second part of the project was to position and lower the gates themselves into the water. In order to do this Fagioli again created a customised support structure called the "fishing beam". To create this lifting system that would be used to hook the mobile barrier, the machines were fixed to the launching gantry system by means of 14+14 axle lines of SPMTs. Whilst this was taking place a barge equipped with a set of 4 gantries previously fixed was put in position ready to receive the convoy. Fagioli SPMTs executed the load out of the whole system onto the barge. Another set of SPMTs carried the gate onto the barge.

The barge then had another set of tower legs connected to a bottom frame were joint to the 4 towers sections (top frames) by means of a mobile crane.

The four fixed gantries lifted the launching gantry structure whilst the SPMT's with the temporary supports were moved away. The launching structure was then lowered in to the water and laid on the caissons positioned by Fagioli at the bottom of the sea.

Once laid on the caissons, the mobile barrier was moved under the launching structure and connected to the support structure. After this connection, the area was cleared from the barge and the barrier was lowered into the water by means of the 4 strand jacks positioned on the crosshead beams. Then the mobile gate was freed from the support structure and fixed to the caisson. Finally, the barge came back to load the launching gantry system and repeat the whole operation with more barriers. 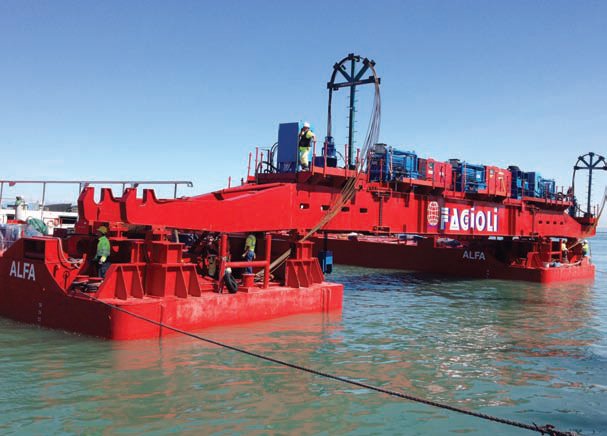 The catamaran designed by Fagioli. 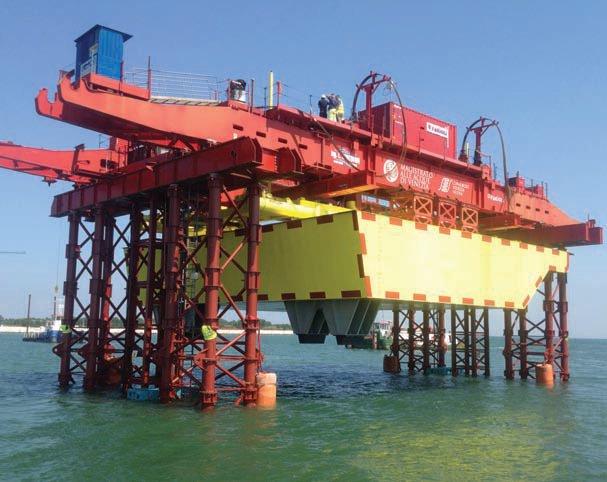 Installation of the barrier. 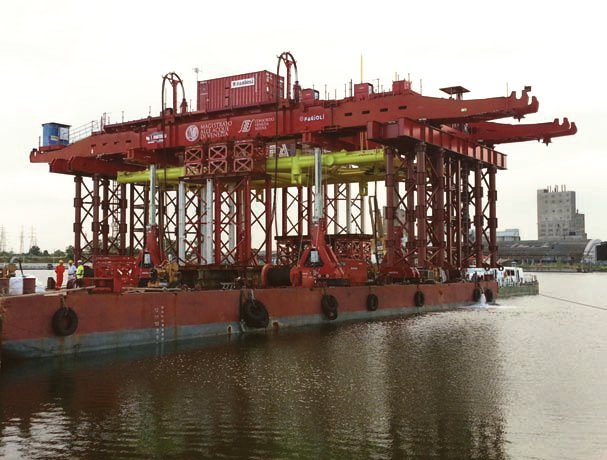 The installation structure on the barge. 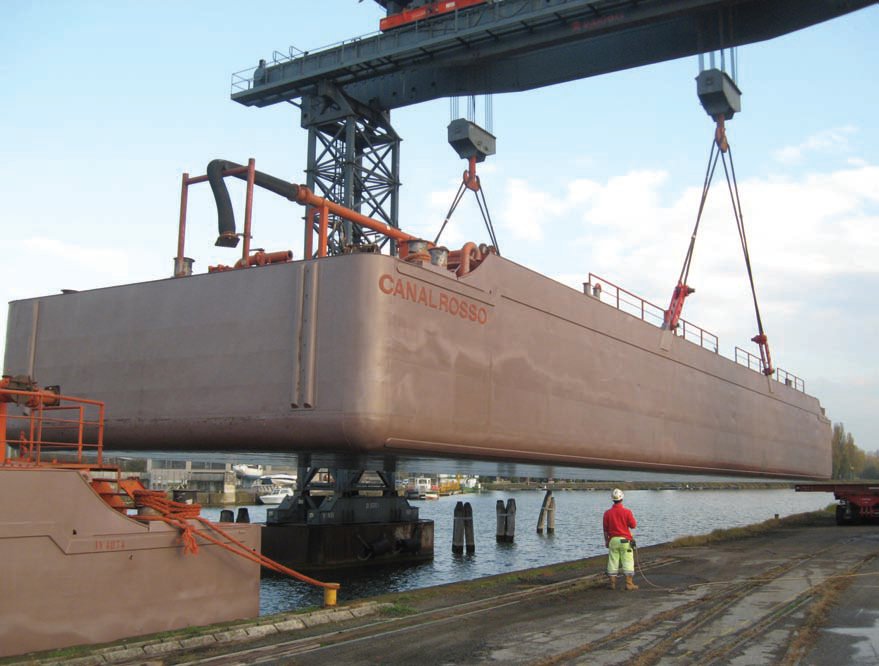 The barge is lifted whilst the SPMTs wait to receive the load. 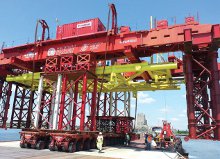 SPMTs move the gantry system out towards the barge.