With heavy lifting at the core of its business, Lampson International developed its own Transi-Lift cranes to meet demand for lifting capacities up to 3,000USt. Simon Hastelow talks to director of PR and communications Kate Lampson.

Lampson International is a thirdgeneration heavy lift and heavy haul construction corporation founded in 1946 by Neil and Billie Jane Lampson, originally as a small crane and drayage company serving its local region and up and down the Columbia River. It wasn’t long before the company grew into one of the largest and most respected crane companies in the world.

“When my grandparents started this company, they anchored it to a rock-solid foundation of quality, trust and commitment to the customer. It was this type of trust and customer confidence, paired with innovative thinking that allowed our company to grow into the world leader it is today,” says Kate Lampson.

“With offices spanning the globe and offering everything from specialised rigging and engineering services to bare rental and fully operated and maintained cranes, we set ourselves apart from the competition early on.”

Recognising the need for a mega lift crane in the nuclear industry, Lampson developed its first self-propelled Lampson Crawler Transporter in 1967 and the first Lampson Transi-Lift in 1973. In 1979, the company was involved in a project at the Hanford nuclear site in Washington State using its first Lampson Transi- Lift LTL-1000, which had a lifting capacity of 1,000USt (982t).

“Lifting a component through the roof rather than cutting a hole in the side of the building was an idea of my grandfather’s and his team and it was an industry first. This became known as the “over the top” method and it revolutionized the crane industry. This project put us on the world map and allowed us to expand our operation into the country of Canada followed by Australia in 1990,” says Kate Lampson.

In 2014, the company introduced the Lampson Transi- Lift LTL-3000 and the Lampson Millennium 4100 Crawler Crane. Today, it has 300 staff worldwide and maintains one of the largest crane rental fleets in North America and Australia with over 400 pieces of equipment in its fleet, ranging from conventional crawler cranes to its proprietary Lampson Transi-Lift offering capacities ranging from 350USt to 3,000USt.

“We have branch offices in the United States, Canada and Australia and we have operated in more than 55 countries over the years. Committed to providing the highest possible customer satisfaction through excellence in service, equipment reliability and a knowledgeable workforce, Lampson is celebrating our 74th year of business.”

Bringing things right up to date and talking about the current state of the US crane rental market, Kate Lampson says: “We have seen a slowing in the market the past two years for a variety of reasons some of which include, a lack of premium heavy lift projects, excess equipment on the market and delayed or cancelled projects due to the price of oil and the coronavirus.”

However, as Lampson serves multiple industries, demand seems to remain consistent across the whole of the US. “From refineries on the West and Gulf coasts to mines and wind projects in the Rocky Mountain and Mid-West regions to power plants on the Eastern Seaboard, we are seeing demand for our cranes across the US.”

Talking specifically about the heavy-lift sector in the US, she says: “We are seeing an increase in demand for our heavy lift cranes within the wind industry. With larger capacities required to erect wind towers of up to 160m along with the increasing size of rotors and blades. We are deploying our Manitowoc 16,000 and 18,000 crawler cranes as well as the Lampson Transi-Lift LTL-1100.”

Discussing the demand for particular crane types and capacities, Kate Lampson says: “Our most popular cranes are the Lampson Transi-Lift, which is one of the world’s most versatile heavy lift crawler cranes. The Transi-Lift system is a patented configuration that combines the heavy lifting capabilities of stiff leg derricks and ring mounted lift equipment with the mobility of a conventional crawler crane.

“Our models range from 350USt to 3,000USt and are easily adaptable to the lift requirements of today’s heavy construction industry. We continue to see demand for the Transi-Lift in the oil and gas industry, new stadium construction, bridge work, power plant construction and in the wind industry.”

In terms of the expectations for the market’s performance next year, she seems less optimistic.

“With the fall-out from the coronavirus and dip in oil prices as well as the incoming Biden administration, we anticipate a slowing in the entire industry. We especially see a downturn within the oil and gas industry, power plant construction and refinery work.”

Looking at recent projects that Lampson Crane has supplied equipment to, the list is as diverse as it is impressive: The Plant Vogtle nuclear power plant in Georgia; Duportail Bridge in Washington State; Nyrstar Port Pirie refinery in Australia; Kennecott Mine Project in Utah.

“We have a Lampson Transi-Lift LTL-2600, with 400ft (122m) of main boom and a 20ft jib on site at the Plant Vogtle power plant in Georgia. Our crane has been on site for over three years and has been used to replace steam generators, make top head lifts, place containment building rings and set conical roof modules. It will remain on site until the second quarter of 2021,” says Kate Lampson.

In the north west, Lampson International partnered with general contracting firm Apollo, to plan and execute the lift and placement of the Duportail Bridge spans, a combined state and City of Richland, Washington project. The Lampson Transi-Lift LTL-1100 with 380ft of boom and 1,600 kips of counterweight were utilised for the project. The largest girder was 175ft in length and weighed 228,000lbs (103.4t) with rigging. The longest reach was 320ft.

Lampson International supplied concrete weights for Apollo to build a pad 20ft out into the Yakima river in order to reach the Queensgate side of the bridge.

“We set 50 girders in four weeks and had the crane dismantled and offsite in two weeks in accordance with Apollo’s schedule. The main challenge of the project was the constant changing of the water level which was monitored on every lift.”

In Australia the company partnered with Nyrstar which specialises in the production of metals such as lead and zinc, in addition to mining, smelting and other operations throughout the world. “Lampson had the good fortune of using our LTL-2600 for work at the Nyrstar Port Pirie; refinery in Australia. In addition to the Lampson Transi-Lift, Lampson also had a Manitowoc 2250 with MAX-ER, M999, M777 crawlers, three Grove RT-9130s rough terrains and 81 axles of Goldhofer trailers, which were used for modular transport and installation.”

Back on home turf in Kennecott, Utah, Lampson International was hired for a mine project to lift a completed rebar cage, weighing close to 400USt into position. The crane company used a Lampson Transi-Lift LTL- 1100 to load out, ship to site and assemble a CK-1000 lift crane, a Manitowoc 14000 lift crane and the Lampson Transi-Lift LTL- 1100. “This request came with the requirement to do all of that and be ready to lift within 20 days, which was achieved,” adds Kate Lampson. 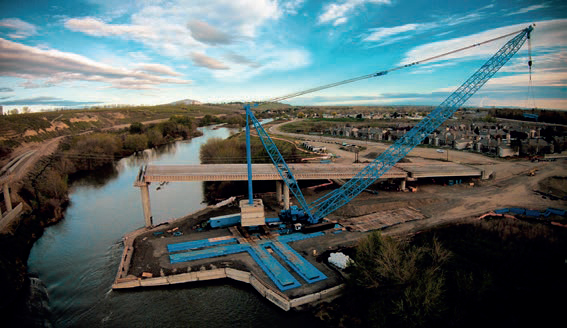 Lampson International partnered with Apollo Inc. to plan and execute the lift and placement of the Duportail Bridge spans. 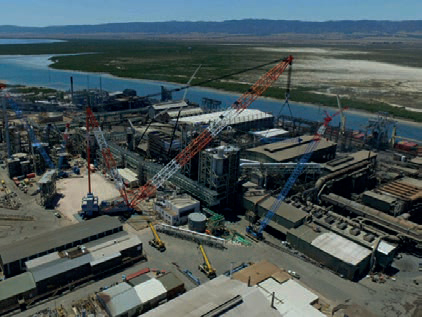 Lampson used its LTL-2600 for work at the Nyrstar Port Pirie refinery in Australia.