Mini crane manufacturer Hoeflon has changed multiple premises in its 14-year history, as demand for its cranes kept exceeding the capacity of its facilities. Sotiris Kanaris met export manager David Fokker at the company’s new headquarters.

Hoeflon’s first crane was built in 2006, when international staircase manufacturer EeStairs asked founder and owner Gert van Hoef for a mini crane featuring a fly jib and mor e compact than the ones that were on the market at the time.

While building the first crane, he received an order for a second one by another company. For the first few years, Gert and his brother Dennis (now head of service and support) were manufacturing the cranes at their family’s farm.

Another indication of the significant growth of the company is that nearly half of Hoeflon cranes operating around the world were produced in the past two years. “Last year we sold 100 cranes more than the year before,” says Fokker.

Over the years, the company’s dealer network also expanded and now comprises 12 dealers around the world. The most recently appointed is CMI Equip in Chile. Last year Foster Crane & Equipment was appointed as Hoeflon’s UK dealer, and the UK market has already became one of the company’s best selling markets.

The other strong markets for Hoeflon are the Netherlands, Germany and France.

In February, the manufacturer obtained Australian certification and its local agent Monitor Lifts is now able to sell Hoeflon cranes in the country. Fokker says the company is planning to enter the Swedish and US markets in the future.

The most popular model is the C6, which has a maximum capacity of 3t and maximum outreach of 13.7m. Fokker says the reason behind the popularity of this crane is that it can be transported easily and is s uitable for 95% of glazing jobs. Apart from glazing, it is us ed for various applications, including lifting steel beams and industrial movements. “We have a German client that uses it to move art,” he adds.

This model was launched in 2013 and last year the company introduced another version, which uses a lithium battery. “Now it comes in two versions, diesel with cable, or full lithium,” Fokker explains.

Last year, the company also launched the C30e fully lithium-powered pick and carry spider crane. It has a maximum capacity of 9t, Hoeflon’s highest, while its pick and carry capacity is 2t.

Without the jib the C30e can reach 21.5m hoisting height and 12.2m boom outreach; with jib it can reach 22.9m and 20m respectively. The C30e features a stepless outrigger system.

Fokker says the reason behind the launch of this model was to attract a different group of customers. “All the customers we had, were asking for C6 or C10. They wanted a long main boom and a shor t fly jib for applications such as glazing. We thought of building a crane for industrial applications. In a factory you do not need a lo t of height, what you need is a st rong fly jib and strong main boom.”

It is compact (3.85m x 1.2m x 2m) in order to easily manoeuvre in restricted spaces, and it is fully electric.

“Our electric cranes have now been running for one and a half years and they are all doing really well. We still see that there is not much trust in lithium batteries and in electric cranes, and I t hink that is something the industry has to change,” says Fokker. “We see that the industrial movement companies just want electric because they work a lot inside, and now the rest has to change. In Holland the politicians found out last year that construction machines are contributing a lot to CO2 emissions, so they have introduced a subsidy on electric cranes.”

A product under development is a manipulator, like a steel wrist. It will have a capacity of 1.5t and will f it on the C4, C6, C10 and C30 models. It will be coming out this year as an attachment. Hoeflon has also released its telematics system, HOEFLink. By accessing the portal, customers can manage their fleet by downloading maintenance and test reports. They can also obtain data for the use of the crane for a three-week period as well as in real time. “They can see in real time the position of the crane, the height, the load and many more parameters,” says Fokker. Through HOEFLink, remote diagnostics can also be provided.

Another recent development is an outrigger force calculation program. A user can input values for load, main boom angle, jib position, ballast, working radius and slewing angles and can check the best outrigger positions for a suitable outrigger pressure.

These new systems, in combination with the new crane, have enhanced Hoeflon’s offering in the market. Fokker says the company wants to remain focused on its market as it is, rather than expanding its portfolio to higher capacity classes.

Despite the commercial success of recent years, at Hoeflon they keep their feet on the ground. They prioritise the satisfaction of their existing dealer network and customers through good delivery times, over an even more rapid growth. 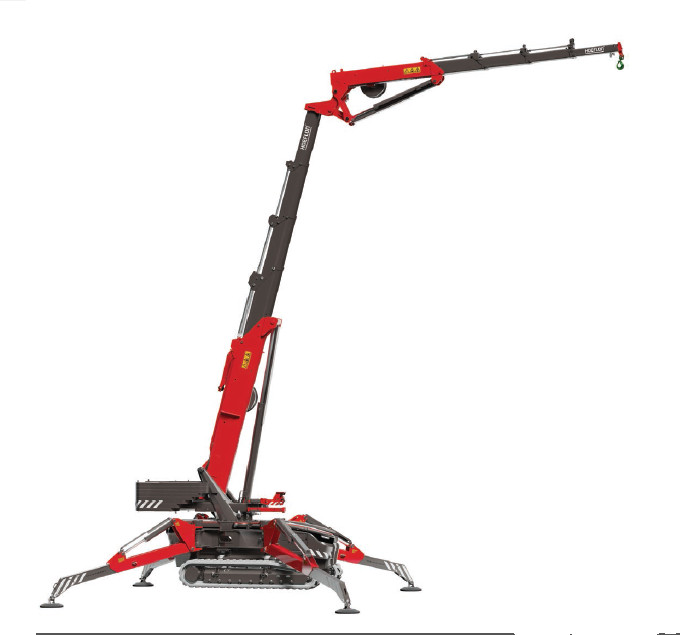 The C30e fully lithium-powered pick and carry spider crane. It has a maximum capacity of 9t, Hoefl on’s highest. 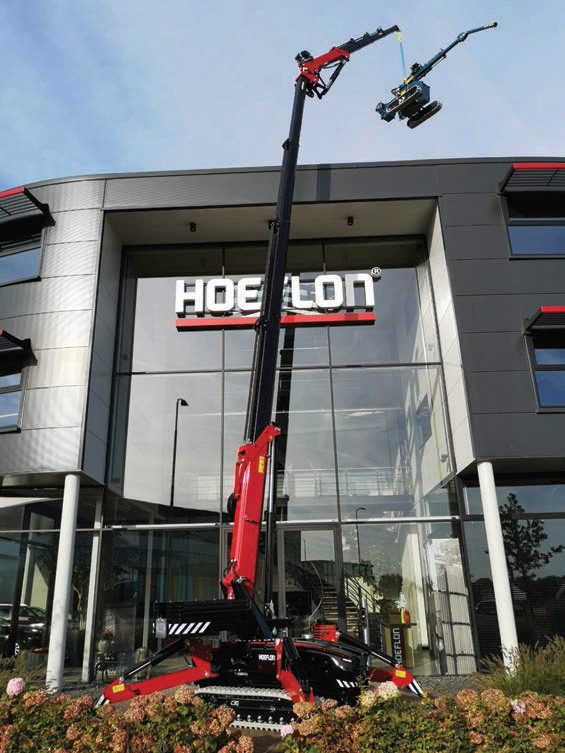 The Hoeflon C30e lifting a smaller machine outside the company's new headquarters. 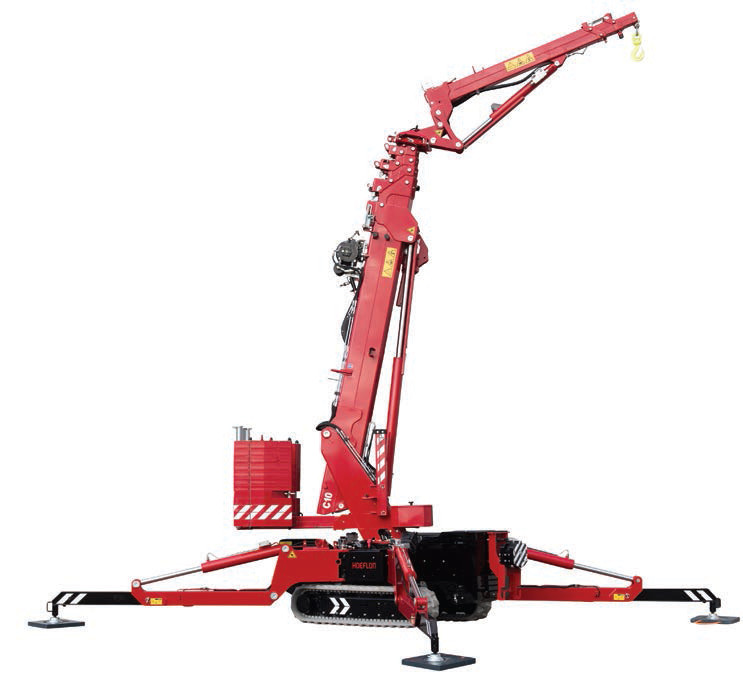