BKL has grown to become one of the largest crane rental companies in Europe. CEO Jörg Hegestweiler talks to Sotiris Kanaris about the company’s strategy and trends in the German market.

“The German construction market is very active. It has been since the mid-2000s, after a period of ten years of not being particularly strong,” says Hegestweiler. “What is driving demand for our cranes at the moment are big projects like shopping centres, airport and infrastructure, as well as residential housing projects.”

Cranes from BKL’s fleet, comprising more than 500 tower cranes and over 100 mobile cranes, can be found all over Germany. The company operates from six locations around the country; two in the North (Hannover and Hildesheim), one central (Frankfurt) and three in the South (Rosenheim, Munich and Ingolstadt). The company has also supplied cranes for projects all over Europe.

Its tower crane fleet consists of flat tops, hammerheads and selferectors, with the highest capacity machine able to lift 1,050mt. Hegestweiler says that big selferectors (with a jib length of 40m or more) are the cranes enjoying the highest demand in Germany at the moment, adding that these machines are replacing more and more the small top slewing cranes.

“If the rental period is shorter, a bottom slewing crane is preferred because the erection and dismantling is much quicker than the top slewing crane. The self-erector can be erected in 3–4 hours; whereas the top slewing crane needs a day for erection. The latter also requires additional trucks to transport the sections as well as the installation of foundations.”

This comparative advantage seems to be the reason for users opting for the self-erector, because Hegestweiler explains that rental rates are not necessarily cheaper: “Many times a top slewing crane of the same capacity is cheaper.”

When it comes to the top slewing cranes, the company has been replacing hammerheads with flat tops. “I would say we have 20–30% more flat tops than hammerheads cranes.

From the new models we have recently bought, nearly 90% are flat tops. We still have the big hammerheads, in the 400mt– 600mt classes, but we are slowly replacing them with flat tops.”

At BKL they have identified a trend towards higher capacity classes for the top slewing cranes. “Ten years ago we started with the 550mt and 630mt machines, then in 2014–6 we bought 750mt machines. During Bauma 2019 we invested in a 1,050mt crane.” The most popular machines in the fleet are those of the 300mt.

“In my opinion, the German market is overflowing with all terrain cranes. My estimation is that there are 6,000–8,000 units in the country. There is a big competition.”

This competition has triggered a change in the way the market operates. “In many markets, like the UK, all terrain cranes are often driven to different parts of the country. In Germany companies tend to serve their local region.

What is new in the market is that service companies are shifting more their machines all over the country. This is triggered by the availability of certain capacities in different areas. So the machines are getting more mileage on the chassis than they used to.”

One characteristic of BKL’s fleet is that it is very young. “The philosophy of the company is to replace the cranes extremely fast. We replace mobile cranes every three to five years, and our tower cranes every 5–7 years,” says Hegestweiler.

He explains that the company has this approach because although the design of a five or ten year-old crane may be similar to a new one, the technology is completely different. “Technology is forcing us to buy the new equipment. For example crane manufacturers have changed the PLC control multiple of times.

Another example is the VarioBase, today is very different to ten years ago. Our goal is to always be upto- date. I would say we are one of the few companies having this philosophy because it is costly; of course if you use a crane for 15–20 years is much cheaper but the reliability of the machine is different to a new one.”

The investment in technology does not only centre on the machines, the company has also equipped a significant number of tower cranes with a data transfer system.

“It is mainly fault-finding, making it easier for the service guys to know how to support the customer. For example, if someone is having trouble with the crane, we can dial in and we see the screen of the crane operator. This is day-to-day business now for BKL.

We really try to understand how the job site is working and what kind of demands are coming up. We are also checking the lifting performance.”

When a tower crane and mobile crane is being replaced, it is sold by BKL directly to companies around the world, with more than 70% of units being exported.

Apart from the second hand machines, BKL is also selling new Cattaneo self-erectors. The company is the Italian manufacturer’s exclusive dealer in Germany for more than 25 years. The machines sold are branded as BKL System Cattaneo because changes suggested by BKL have been made to the original designs in order to match the requirements of the German market. There are eight models offered, with capacity ranging from 1.8t to 5t, and radius ranging between 22m to 41m.

Hegestweiler is uncertain about the state of the crane rental and sales market in the next few years because of Covid-19, as it is likely to affect public and private investments.

Talking about the pandemic and the rise of video conferencing, he says that it will also change the way business is conducted in the long term. He says that BKL’s travel costs this year are 30% compared to 2019. “Engineers will still have to travel to repair the machines. But there can be major reduction in travelling for sales, distribution and fleet management. Maybe we will soon sell our first crane via Teams.” 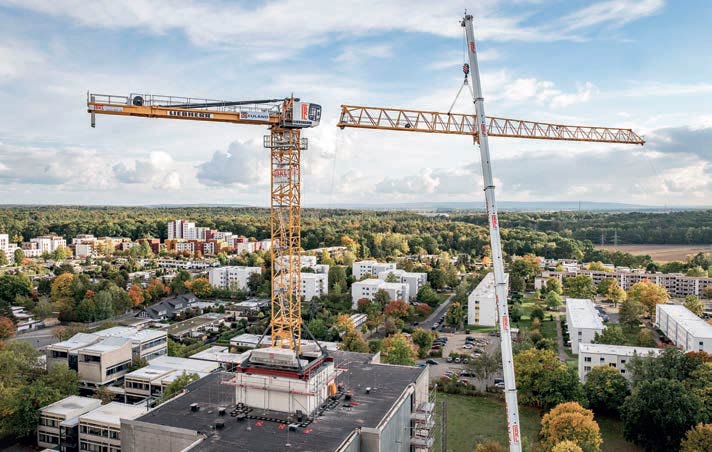 For the renovation of a skyscraper in Wolfsburg, Germany, BKL North installed a Liebherr 202 EC-B tower crane on a rooftop. The top slewing crane was installed at a height of 40m using a 300t Liebherr LTM 1300-6.2 all terrain crane. 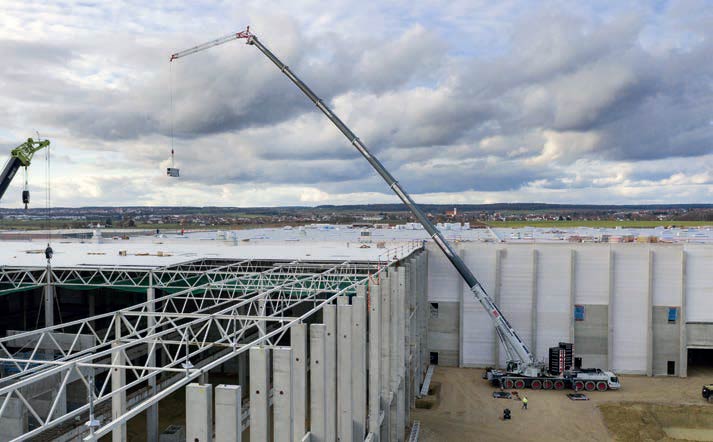 Earlier this year, BKL used its Liebherr LTM 1450-8.1 all terrain crane to install air conditioning units on the roof of a new industrial building in Kösching in Bavaria, Germany. The crane was supplied by BKL’s depot in Ingolstadt.