Will North visited PM’s facility in Castelfranco, Italy, and spoke to Giuseppe Ceraolo, product manager, about global demand for articulated cranes, Manitex’s acquisition of the Italian company, and Tadano’s subsequent investment in the US firm.

It’s been a long time since knucklebooms were purely a European concept, or merely loaders. For many years these cranes have increasingly sold around the world, and used for lifting as well as deliveries.

As knucklebooms implemented advanced control systems that measure the overall stability of the truck and crane, in response to EN12999:2009, they increasingly were able to lift higher loads at greater distances.

Today, it is often smaller all terrains that large, modern, knucklebooms like PM’s look to compete with. Ceraolo explains, “The tonne-metre capacity has increased in the last few years; PM is now producing 210tm machines, competing with mobile cranes. This is bringing more demand from all over the world. Knucklebooms with a high tonne-metre capacity are more flexible than other mobile machines. The advantage of a knuckleboom like the PM 210 is that it can be installed on a standard truck, with the possibility to drive according to local rules, like a normal truck.

“The engineering is quite complex, in a way more so than a mobile machine. But the advantage is a 200tm knuckleboom can work in a very narrow space compared to a mobile crane. There are a lot of these machines, for example, in New York City, where the traffic is very high. The knucklebooms don’t need special permission to enter the city, because the total length of the truck is shorter than a mobile crane. And the working area is absolutely smaller. The advantage is that you can extend all the booms, put the fly jib over the building, and work over the building, leaving the other side of the road free.”

As well as offering more flexible working, modern machines are designed to work safely, even at long outreach and in fast operation. Ceraolo says, “Most of our machines are equipped with a very modern safety system. It is complex in terms of the information it conveys, but, for the operator, it is designed to be very easy to use. We’ve improved a lot the communication between the machine and the operator, by using the display on the remote control for real time information to operator. Most of the machines are equipped with radio remote control, to let the operator work from a good position, with a clear view of the working area. This contrasts to a mobile crane, where the operator is in a cab. This also means the mobile needs more space to work, in order to give the operator an unobstructed view.”

While knucklebooms, particularly large ones, are finding new sources of demand, this is still a market shaped by tradition. Ceraolo says, “Knucklebooms are mainly European machines, but year by year we are receiving more requests from the rest of the world. There are some exceptions, like Japan, where the market is completely different, [where customers almost entirely] request non-articulated cranes. But in the rest of the world, we are seeing more and more success. The main reason is that knucklebooms, unlike telescopic cranes, can fold behind the cab, leaving space for load.

“This is one of the reasons why Manitex started to look at the worldwide market, and decided to buy PM. Even in the countries where the market is more focused on telescopic cranes, the knuckleboom concept is getting more and more success. Manitex don’t have this type of machines.

“As well, Tadano, one of the biggest mobile crane manufacturers in the world, decided to invest in Manitex products, mainly for PM articulated cranes. Manitex only making telescopic cranes invested in PM, and at the same time, a couple of years ago, Tadano bought 15% of Manitex, because of its interest in knuckleboom machines. This means knucklebooms can grow on the global market, while telescopic cranes are still used in some markets—like oil and gas—and countries like Japan, where that is the mentality.”

We saw an example of the relationship with Tadano as we walked around the factory. Alongside cranes carrying normal PM branding, we saw a number of machines bearing Tadano’s name alongside that of the Italian manufacturer. These cranes will be shipped to the Japanese firm’s facility in Singapore, from where they will be delivered to customers across South East Asia.

PM’s relatively new ownership, under Manitex, is also seeing it develop machines for the US market. On the one hand, standard knuckleboom cranes will be on show at ConExpo this month, under the MAC (Manitex Articulated Crane) brand. At the same time, the company has developed machines targeting the country’s distinct building methods. Ceraolo says, “In the US, they are mainly demanding wallboard machines. The construction of houses in the US, is completely different to the rest of the world. They make houses using drywall. The PM Powerlift is a dedicated model, double articulated, but with long booms to quickly load and unload drywall. These machines need to work very quickly, across the working area. The companies who are fabricating and delivering drywall, need to do a lot of runs to supply customers. We designed this machine to have a long outreach, but using only four extensions. It’s designed to fold like a scissor lengthwise between the drywall packs, which are delivered stacked vertically.”

Around the world, the company is finding niche sources for demand. Ceraolo says, “There are some countries, like France, where there are historically very big rental companies renting trucks. Often they offer them with cranes, with or without operator. But the main portion is still companies who are using the crane privately.

“Another example I have seen in South America, with bigger machines, is service support for oil exploration. If they need to rent a mobile machine, it can take a day to get there, as they travel at only 30mph, while a knuckleboom can reach 70mph.

“In some countries, like Chile, Argentina, and Peru, there are a lot of mining companies. They are mainly foreign. They very often request knucklebooms for servicing or for handling devices inside of the mines. PM has a very good market share in this business. Especially in South America, our branches are not only selling the cranes, but doing the installation on trucks, as well as service. The key for this market is very prompt service. Inside of the mines, they are very rigid in terms of contamination: they pay a lot of attention to pollution and contamination by oil. They have daily inspections of equipment before entering the mine. They want to be sure that there is no oil leakage, no pollution.”

A 100SP under testing in Castelfranco. 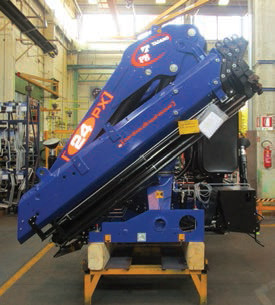 A Tadanobranded machine destined for shipping to Singapore, and for sale to customers in South East Asia. 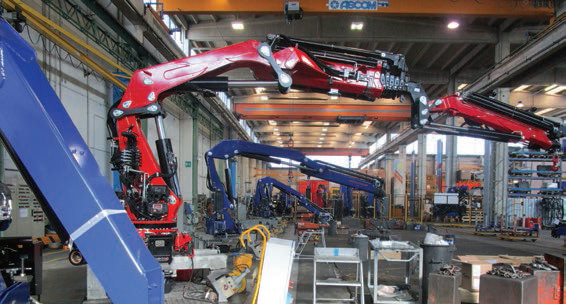 The indoor testing area at Castelfranco.