From factory floor to shipyard

When it comes to special transport, its easy to only focus on those projects involving thousand tonne moves. Often overlooked are jobs that involve less weight, but are equally challenging for other reasons such as restricted space. In this article Zak Garner-Purkis looks at those jobs where precision is as important as power.

Industrial installations have changed. The piece-by-piece construction of methods of previous eras are increasingly being replaced by completed sections of equipment being placed directly in situ. In new factories this can be a fairly straightforward process, but in existing structures the method becomes more complex. These jobs require engineering innovations as every millimetre counts in the navigation of difficult environments. Crucial to such work are the transportation systems used by firms to maneuver large units into place.

Whatever the project, it's the job as a whole, not the mere scale of the load that matters. "Every single transport and lifting operation has its own story. It depends where the machinery or items are supposed to be moved, their weight and dimensions, sometimes the weather or road conditions," says Rudy Corbetta, publicity manager at Fagioli.

"Lots of elements need to be taken into consideration, starting with the surroundings, the place of load and unload. Road restrictions have been becoming stricter and stricter, particularly in regards to roundabouts, new bridges and so on.

"If we're working on a new site where we have to transport a 3,000t module but where the road is well compacted and there are no obstacles, it can be easier than when we have to transport a 200t piece in the north of Italy where you have to remove and put back into place hundreds of road signs and traffic lights."

"Maximising space is essential, in order to use the heavy transport equipment for the transport, lifting and installation operations.

"Sometimes the warehouses or plants in which we operate are live, this means there are people working at them, which of course results in a range of problems relating to safety and space to operate. In restricted areas sometimes some special trailers such as SPMTs are used, due to their great flexibility."

The margins within which special transport and riggin firms work can be very tight.

"Sometimes even with the most advanced and compact equipment, you only have an inch of variance inside a plant or getting through a doorway. Occasionally, with the machine itself, you may have less than an inch," says Jim Taylor of Taylor Crane and Rigging, "There are engineering techniques based on a job by job basis. The primary techniques are using the proper tools. Customer concerns and load challenges when moving 500t versus 2,000t are somewhat similar. However, there are really a different set of environmental challenges"

"When transporting thousands of tons, you are usually dealing with fewer challenges in some ways. Moves of this scale are usually preformed on private property such as barges and plant, areas engineered for these types of moves. Therefore, removing the challenge of several factors like roadways, bridges, utilities and the general public.

"On the other hand, transporting 500t across state and interstate highways, county roadways, and other public ways, requires communication with multiple agencies such as department of transportation and utility companies. Often times you must redirect public traffic, comply with time of day requirements, because sometimes day and night transport is required. Smaller moves are more challenging in theses ways and more. It really is a different set of challenges."

Hendrik Sarens, Saren's director, has also experienced similar hurdles: "When installing complete pieces of machinery a lot depends on the available land and whether sufficient space is available. Sometimes it can be challenging only transporting a few hundred tonnes if the dimensions, route to be followed, weather conditions and obstacles on route present difficulties."

Positive energy
There are some industries where demand for this type of work is more common than others. In the oil and gas sector, for example, strict regulations mean that equipment must be replaced on a regular basis. Often the facilities requiring improvements will be ones that have existed for a long time, with unmovable obstacles and live plant conditions. The energy sector as a whole is seeing more and more of these type of moves taking place, as the practice of installing complete modules spreads.

"The power and energy sector provides the most work, with heavy manufacturing the second," says Taylor, "There has been a slow increase in the number of installations with complete pieces of machinery. Industrial plants in particular seem to be gaining.

"The key is to be prepared with the right tools, resourses, field personnel, engineers and experience. If we don't have these, we are upfront with our clients. It is important to work closely with clients that understand the issues and challenges. If you are not qualified, you have to decline the work."

Going nuclear
Nuclear power is one industry where installations of fully formed equipment are common. For obvious reasons a nuclear plant is an environment where certain obstacles cannot be removed. Barnhart Crane and Rigging worked on the upgrade of a nuclear plant at the Point Beach Nuclear Station (PBNS) in Two Rivers, Wisconsin. This job required the removal and replacement of four feedwater heaters. In many places the flooring of the facility would not support the weight of the feedwater heater, whilst height restrictions also presented significant challenges.

The feedwater heaters were 42ft long by nearly 6ft wide. Barnhart's plan for the project was to cut doors into the side of the building and pass the feedwater heaters through them using the company's Tri-Block rigging system. In the building, there were numerous obstacles and elevation restrictions, alongside several floor limitations. The feedwater heaters had to slide through the facility on what Barnhart described as a tedious obstacle course of raising, lowering and rotating. The heaters were transported using Barnhart's Goldhofer self-propelled modular transporter SPMT systems.

Ship shape
Shipbuilding is another sector where the speed of construction can be increased by the installation of fully formed sections. In China Honghua Group used Tianjie Heavy Industries' (THI) TJ-S2.43 SPMT to move body sections of a large vessel from its workshop to the ship. Each body section weighed around 300t and measured roughly 15m long, 20m wide and 10m high. The building's structure also meant space was limited.

The engineers on the project used a jig to place the ship section onto the SPMT. The jigs' parts were connected by variable length connection rods, but due to the constraints of structure width the two sets of eight-axle line SPMT had to be driven underneath the structure and in between both side stools with less than 10m space.

The cargo's main heavy parts were on both sides, with the centre of gravity around 6.5m from the ground. Honghau's loading method positioned the centre of gravity outside of the loading area. The bottom of the section was a curved surface that helped shift inboard of the mass force to the supporting point of the SPMT. The weight of most of the load had to overhang the SPMT.

To ensure that the ship sections were moved safely the Tianjie SPMT's hydrostatic and computerised control multisupporting points balance system were used for the overhang weight move operation. During the moving stage, the Tianjie SPMT was run laterally at a speed of millimeters per second, and then run forward out of the workshop.

Products for purpose
In a sector where innovation is so crucial there is strong demand for manufacturers to provide flexible products that can perform a variety of diverse and difficult jobs. This is something that Tii Group has done with its latest SPMT: the K25. The key to this machine's appeal is its adaptability, says the manufacturer.

Another feature particularly targeted at customers who are performing complex transport jobs is the Power Booster. This feature allows the K25 to be pulled by a regular truck or used as a self-propelled trailer. Tii Group said that it believed that this feature was unique as most products are usually either pulled or self-propelled. It added that bringing the SPMT on its own wheels to the jobsite saved times and costs. With these features Tii Group said it expected the product to do well in the North American energy sector. 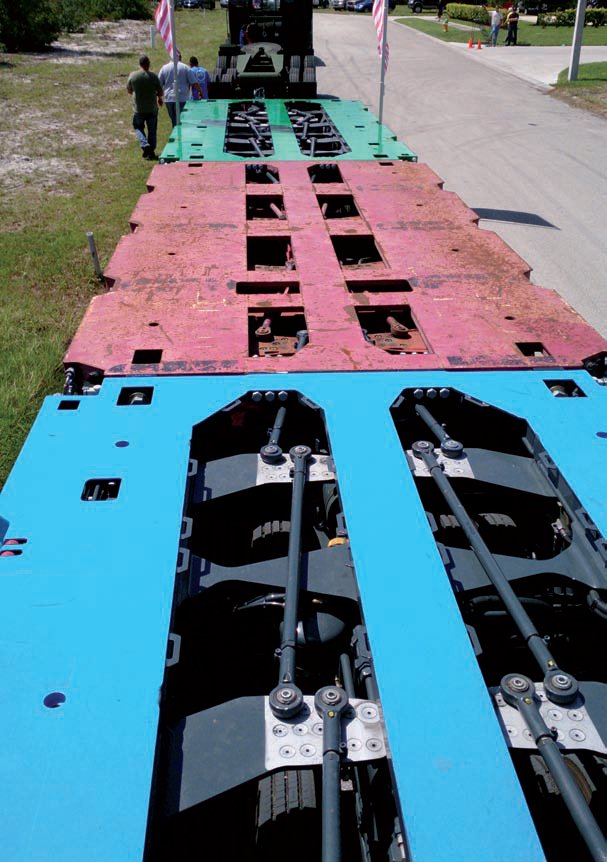 TII Group’s new K25 transporter has been designed to be used with a company’s existing fleet. 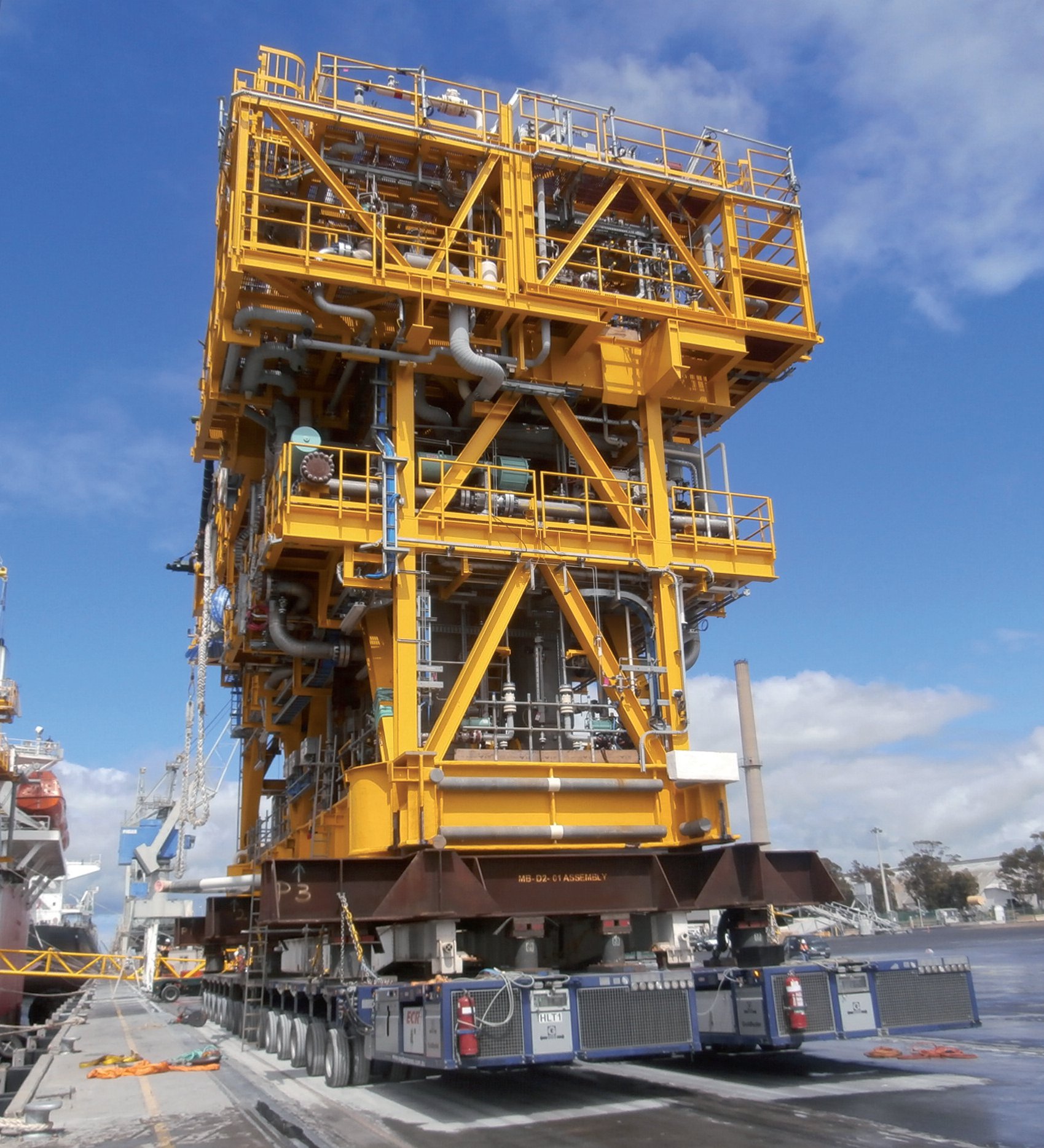