After years of development, Mammoet’s Focus is currently being fabricated. Sotiris Kanaris visited the company’s office in Schiedam, the Netherlands, and talked to Jacques Stoof, global director market development and innovation, about the new crane.

Back in 2013, Piet Stoof talked to Cranes Today about his idea for a new very heavy lift crane. Stoof developed the first giant containerised heavy lift device built by Mammoet, the MSG-50. The company followed this with the MSG-80 and PTC cranes. At the time, the proposal was for a 10,000t device.

In 2016, Mammoet teamed up with Piet to develop a crane capable of lifting up to 24,000t, named Focus. Many elements of the original idea, in particular the sliding footing of the device and a self-erection system that allows the crane to be mobilised in limited space with no assist crane, remained. At this first version of Focus, the whole assembly process was to take place in a vertical direction as opposed to conventional methods, which require space on the ground to assemble the boom. The company highlighted that there was also no need for auxiliary cranes as lifting capacity was integrated into the design. The crane footing was designed to move back and forth and in rotation around the back mast, even when loaded.

“We first started with a ring crane concept, basically oldfashioned hinge points and a guy derrick but erected vertically,” says Jacques Stoof, global director market development and innovation at Mammoet. “Then it evolved to the version with hydraulic skid shoes in combination with strand jacks for lifting and still climbing with two units, like an extension ladder. And then it evolved to what we have today.”

Mammoet changed the design a number of times along the way and shifted the attention from the extremely high capacity to an innovative erection process that will allow the crane to be assembled faster in cramped spaces, like refineries. “For a change, Mammoet is not building the biggest crane, but we are building the smartest crane,” says Jacques.

The final product is the Focus30, a super lift pedestal crane that has specific features to realise vertical assembly (erection) of the boom system on a small assembly area. The pre-assembly of this crane will start in April, while the first erection in June or July.

An interesting feature is that it has a 90t runner on it, to perform some small lifts. It also has a variable Superlift, reaching from 16m to 30m. “At all times, when we release the load, we can unpin and there will be 400t counterweight remaining. With this concept Mammoet has taken care of counterweight management, which is a big problem for our customers. For conventional cranes, if you have to stack and unstack your counterweight it takes one or two shifts, we designed our Superlift in a way that it takes one or two hours.”

The crane features a conventional jib and not the special jib that was included in the previous design. Jacques explains that this is because the erection process has changed and no longer requires a special jib.

According to the design, the erection process starts with four large mat pads and a 400t capacity hydraulic crane; if lower ground pressure is required an extra set of load spreaders can be placed. Then the undercarriage is built on top of a bearing and towing mechanism. The crane’s upper structure is placed on a pedestal.

“What is different compared to the regular cranes is that the winch systems are at the front, because we need the space at the back to install the boom sections,” says Jacques. The assembly team then installs the boom erection frame on top of the carrier and support the back. “You put on the first boom piece at the back and a small mechanism pulls it in. So we connect from the bottom and every time we pull up a full section, the next one will follow. It is 90m of main boom and 18m of the jib at the front. So we climb all the way vertically up in the air and when we have the last point settled in there, we connect the Super Lift.”

Another interesting part of the design is that the back mast is also installed vertically. It also features working platforms.

Unlike other Mammoet cranes, the Focus30 is not containerised and can be transported in 59 truck loads without Superlift. “We decided not to containerise this crane because it is designed for the US Gulf Coast, which is relatively easily accessible, you can reach it from the coast or via the road,” says Jacques.

The decision not to containerise, Jacques says, also represents Mammoet’s shift from developing cranes to not only solve its own problems (shipping time and money) to ones that primarily meet the customer’s needs.

The Focus30 is designed for congested construction sites on petrochemical plants. The first unit is already booked for its first job at a refinery in the US Gulf Coast in January 2021.

With many countries investing heavily in renewable energy, one would think that there may not be a long-term market demand for the crane, but at Mammoet they believe that Focus could be used for numerous jobs in the petrochemical industry in the future.

“The world population is moving from 7bn to 10bn in 2050. With more people living in cities, it means that they will be getting even more congested. The increase in population will trigger an increased demand for consumer goods and most of these are being made out of plastic, which uses oil and gas,” says Jacques.

He acknowledges that the share of oil and gas industries in energy generation will fall but he thinks that the increased demand for consumer products will keep the demand for these sources high.

He adds that in some parts of the world like the Middle East, India, and China we may see new refineries opening, but in Europe and North America it would be extremely hard for petrochemical companies to obtain permits to build new facilities. Jacques expects a consolidation of existing plants in these parts of the world.

“The existing refineries in Europe and in US are relatively old, they have been built after WWII and they are coming to the end of their design cycle, which is roughly 50-60 years. So the oil companies have to make a decision, ‘are we going to shut them down, demolish them and clean the ground and move on or are we going to revitalise them?’ But with the growth of the population, which they didn’t foresee in the 1960s, shutting them down is not an option. They have to stay open and the refineries have to be revamped.” This is the application that at Mammoet they believe that Focus can make a difference.

These facilities are extremely congested and any machine replacements (e.g of a Fluid catalytic cracking (FCC) unit) are currently being done using the largest crawler cranes in the market.

This is a challenge, as there is usually not enough space to set these cranes close to the load, so the boom is often over pipe racks, creating safety issues.

The plants are often divided in various units. Sometimes multiple units of the facility need to shut down and not just the one where the replacement occurs, just because the boom is over the pipe racks. This causes a substantial loss of production.

This is where Focus provides a solution, because it is erected vertically and has a small footprint, it would be able to make the replacement from within the unit. This enhances safety, as the boom is not over pipe racks, and also eliminates unwanted shutdowns of other units.

In addition, time is saved because the assembling, planning, lifting, disassembling and clearing is done faster with the Focus compared to the current solution of large crawlers.

“With the crane's ability to get very close to its actual lifting area, you do not need a lot of capacity. These types of lifts normally do not exceed 500-600t. The size of this FCC unit was exactly what a crane could lift. The limiting factor was that. With the Focus, not only can we keep the different units running so there is no loss of production, not only can we renew equipment that couldn't be reached or renewed before, but we can also increase capacity. We are taking out a 600t reactor and we can replace it with a 1,000t one. Our clients will not only be able to revamp their plants, they can upgrade them.”

Another problem that the Focus30 solves is ground preparation. “Because of the pedestal system there is very low ground bearing pressure. At fully loaded we are roughly at 8t–10t per sqm, but for most of the lifts with 500t we can even achieve 6t per sqm. So there is no need for foundation.

“We solve three problems: area, time and ground bearing capacity. We tell our customers, if the Focus is not sorting out these problems, use a conventional crane. Focus is not a cheap crane but saves a lot of money [in terms of project costs like assembly and shutdown time]. The customer should look at the total cost of installation not just the cost of crane rental.”

Jacques is optimistic about the success of the Focus30 and the company is already looking for investment for a second crane.

“The response that we got from the market is so positive that I think we will build five units. We will have a similar scenario as the one we had in the days of the [comparatively] small PTCs. We started with the first one and very quickly we needed to have four in the market. This is where it is going with the Focus as well. Some of the comments we get from our clients is that it is a game-changer. Once it is done with its first job, it will be booked for years. Also one of the plant owners asked if he could book it for two years in order to upgrade the refinery in one schedule. These are signs that we are really addressing the need of the market.”

Mammoet sees the Focus suitable for applications beyond the petrochemical industry such as congested inner city civil works. Jacques gave as examples that the Focus30 could work in railway projects and stadium constructions. 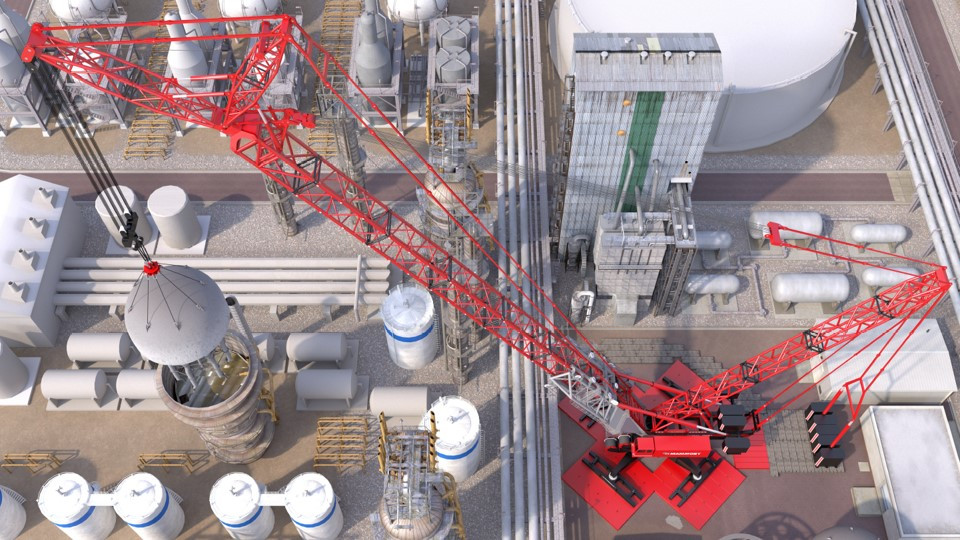 The Focus30 is designed for congested construction sites on petrochemical plants. It has a maximum load moment capacity of 30,000tm.

Parts of the crane are currently being fabricated. The pre-assembly of this crane will start in April, while the first erection in June or July. 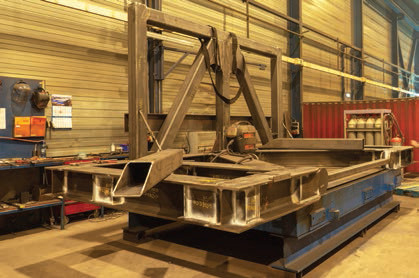