Rough terrain end users have been increasingly interested in higher capacity models, especially in North America. New models of 100USt or more have been launched, could we reach 200USt? Sotiris Kanaris reports.

Over the past two years, the number of rough terrain crane models with capacities of 100USt (90t) or higher in the global market has increased.

The most recent launch of a rough terrain in this section of the market is Manitowoc’s 120USt Grove GRT8120, which was unveiled at ConExpo in March.

“We chose this capacity because over the last several years we’ve seen a shift in the rough terrain market to higher capacity models,” says John Bair, Manitowoc’s product manager for RT Cranes in the USA. “Customers are looking to maximise the utilisation of their fleet and having a higher capacity crane with a longer boom enables them to grab additional jobs that they may not have been able to do in the past with a lower capacity crane with a shorter boom.

“A large part of that volume sits in the 80 to 120USt classes. Since we already have very strong, new product offerings in the 80USt Grove GRT880 and 100USt Grove GRT8100, the next logical step for us was to build upon those successful platforms with a new model that will be a part of the 120USt class.”

The GRT8120 has a capacity of 120USt and a 197ft (60m) main boom with 265ft maximum height when equipped with the 57.6ft bi-fold swingaway extension that comes in either manual or hydraulically offsettable configurations. Also new to the GRT8120 is the MAXbase asymmetrical outrigger system.

“The key with this new model was to focus on keeping the crane compact and easy to transport, but also maximising the boom length and providing strong capacities.

So this new model will feature unmatched reach in its class with a 197ft main boom, which is more comparable to cranes in the 150USt+ classes, but also with compact dimensions that are more similar of cranes in the 80–100USt class,” Bair says.

Bair said: “We had very positive order intake and feedback since we launched our new Grove GRT9165. We’ve been in this class for a while now with our Grove RT9150E previously, and now we’ve built upon that legacy with the new Grove GRT9165 while building in technological advantages, like our modern Crane Control System (CCS) and making it even easier to transport and providing the longest and strongest RT crane in its class.”

As to whether it remains a niche product, Bair answers: “The volume in the 150 USt+ class is not that of the 80–120USt class, but it is one that is steady and is growing in some markets. These cranes are excellent in refineries, wind farms, general construction and a variety of other applications.”

ConExpo was the first US show where Link-Belt’s 100|RT and 120|RT shared a booth since their launch. The 100USt 100|RT was introduced during the manufacturer’s CraneFest event in 2018, while the 120USt 120|RT was unveiled at last year’s Bauma.

These two cranes are part of a new series (alongside the 75|RT). Kelly Fiechter, product marketing manager for rough-terrain cranes, says that through this series of cranes Link-Belt is “trying to maximise the whole package— maximising capacity, boom length, features, usability, and operator comforts.” These crane models have various new components, including the new Pulse 2.0, the SmartFly system and a new Stage V engine.

“The 100–120t class is very popular right now worldwide. We see demand for all of our products, but certainly we are seeing more and more calls for this class,” Fiechter says.

Despite the rise in popularity of this class, he does not believe that the market for lower capacity rough terrains is going away. He says the demand for all classes fluctuates because of various factors.

“There are factors that have to do with construction needs, rental rates and global demand for used units. I think there are a lot of factors that come into play when you look at different tonnage classes and machines, and right now the demand for new units is shifting toward this 100USt class.”

These models have been used for various applications. Fiechter says the six-wheel drive, six-wheel steer capability of these cranes in association with their lower ground bearing pressure, compact dimensions and long main booms make them ideal for service and plant works. He adds that because of these characteristics, these cranes can replace other types of cranes, such as fixed boom crawlers and all terrains, at job sites with space limitations.

Today, Link-Belt Cranes offers two six-wheel rough terrain cranes, and the manufacturer says the market has responded well to them and that the orders have increased over time.

Tadano also has a model in the 160USt class, the GR-1600XL. Shingo Mizuno, product marketing manager for Tadano says it has become a popular model in North America.

This region is where Tadano has identified a trend towards rough terrains with capacities of 100USt or over. “We think two main reasons generate this trend. One is the module in the plant is larger, the other is enhanced awareness of safety in terms of lifting capacity.

We think other regions such as Asia and Middle East will follow this trend,” says Mizuno.

Mizuno explains the differences between the GR-1000XL and GR- 1000XL-4: “The GR-1000XL-4 has some new features. One of them is ‘Smart Counterweight’, the new function to increase lifting performance by mounting counterweight on the rear position.”

Another feature is the Hello- Data Link, Tadano’s first smart phone App function for rough terrain cranes. “It allows you to receive operating status, indications, error codes and other information in real-time from outside the cab. Multi-function display, with the new colour touch panel, is newly available and enhances usability. Tadano View System also enhances safety with visibility aids from a right-sided camera, rear camera and winch drum camera. In addition to that, GR-1000XL-4 has many other new features such as tiltable cab, which is newly available in this class, and an extendable step that assists safe access to the cab.”

Wolfgang Beringer, marketing and communications at Liebherr- Werk Ehingen, says the reason why Liebherr chose these specific capacities to re-launch the RT line was because their market analysis showed that the 100/110USt class was the best class for the US market.

As to which one is the most popular, he says: “In USA the 1090-2.1 (100 USt) is very popular, but the LRT 1100-2.1 (110 USt) mostly is chosen by customers who tested it. Our boom extending single cylinder system Telematik offers higher lifting capacities and is especially easy to handle on the LRT 1100-2.1 with just two telescoping paths.”

The largest Terex models are the 90t RT90 and the 100USt RT 100US; these are the same model with the latter adjusted to meet the requirements of the North American market. They have a five section, fully hydraulic boom which stretches 154.2ft, while the maximum tip height stands at 217ft.

“The market has responded very well to these models and customers have experienced reliability and performance that rivals the competition. They are typically used in refineries, industrial and wind applications,” says Chris Johnson, North America sales director at Terex.

As to whether there has been a market trend towards higher capacities, Johnson says: “The market is and always has been moving to larger rough terrain cranes. We are certainly looking at larger capacity machines, but we are focused on filling out our product line with what makes up the majority of the global market, and outside North America requests for rough terrains with capacities above 130USt are not as common.”

Is the market ready for a 200-tonner? Liebherr’s Beringer is clear: “We do not see a market in this class.”

However, the manufacturers seem not to exclude the possibility of developing one if the market requests a model of such capacity in the future.

Manitowoc’s Bair says: “We are always listening to our dealers and customers and evaluating market demands and shifts in equipment needs, so we are always open to extending our product line to better serve our customers. I think if you asked someone 20 years ago if there would ever be a need for a 165 USt rough terrain crane they would have said no, of course not, but look where we are at today.”

Link-Belt says they pay close attention to voice of the customer when developing new products. “We really pride ourselves on listening to our customers, and to their requests. We would not set any limits on what the future might hold and will continue to follow the needs of our customers,” says Fiechter.

Designing a 200USt rough terrain might pose some challenges. Tadano’s Mizuno says: “We think it depends on the weight of the crane in terms of transportability. It may be challenging but can be realised by advanced technology of weight saving. We would like to consider it, judging from requests from the market.”

Terex’s Johnson believes that there could be a 200USt developed but similarly highlights potential transportability issues. He says as the capacity of rough terrains grows in association with the utilisation of three-axles, a blurred line gets created between them and similar capacity all terrains. However it is harder to mobilise such a large rough terrain compared to an all terrain because it has to be hauled instead of driven.

The first Grove GRT880 roughterrain crane in New York City was used by Great Lakes Dredge & Dock (GLDD), one of the largest providers of dredging services in the United States, for vessel repairing operations and marine equipment installation at its Staten Island facilities 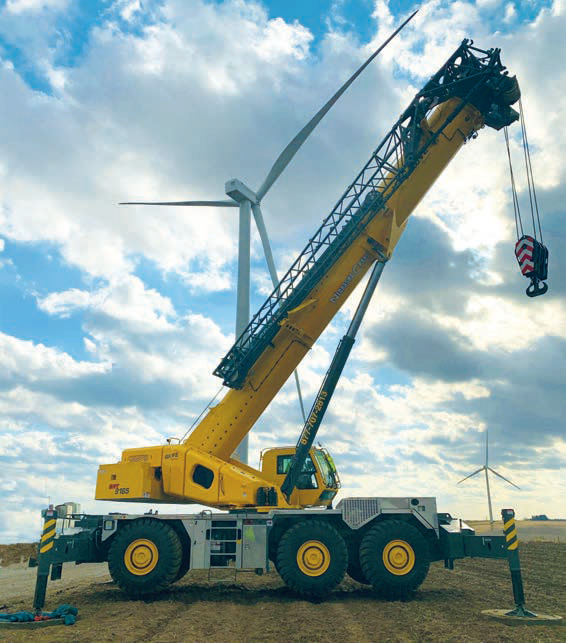 The new 165USt capacity Grove GMK9165 owned by Nebraska Crane being used on a wind farm installation in the USA. 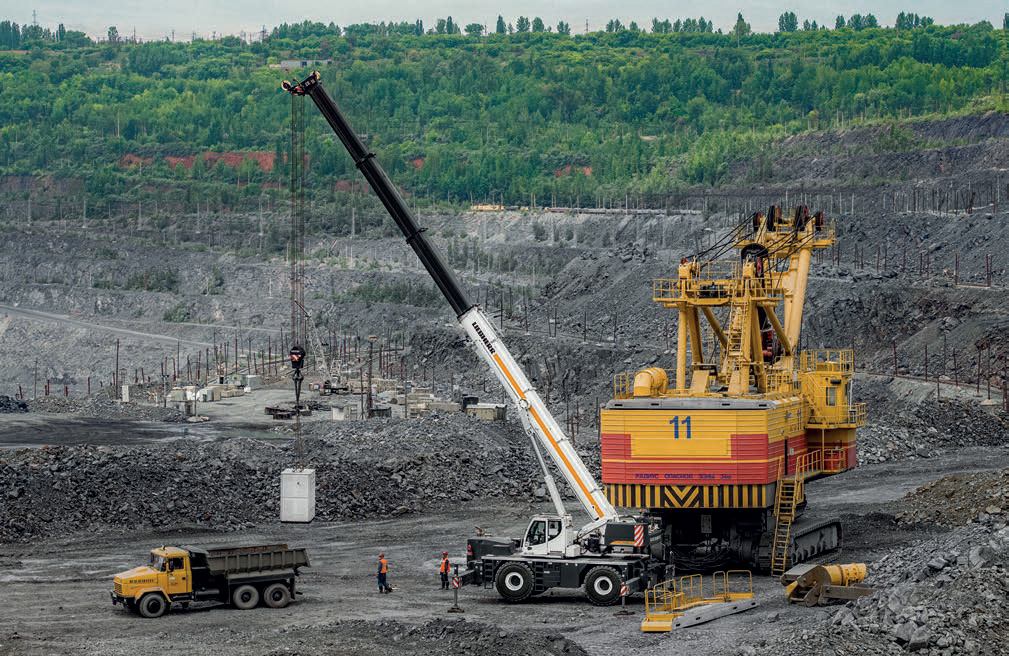 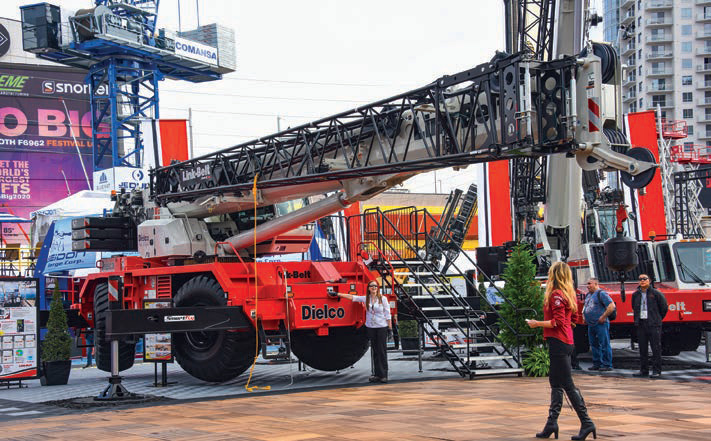 A demo of Link-Belt’s SmartFly system on a 100|RT at this year’s ConExpo. 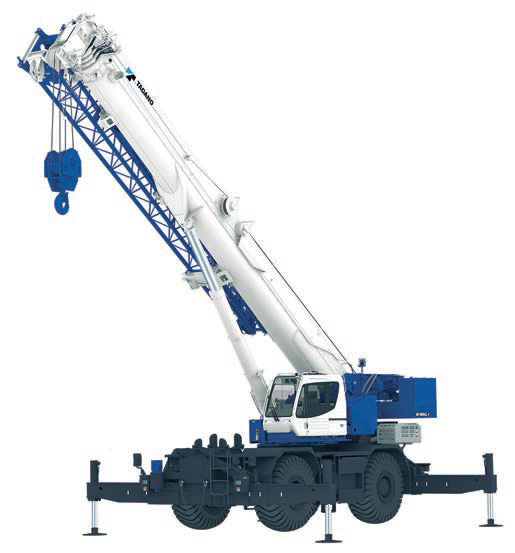