One of the most groundbreaking changes to the industry at this year’s Bauma will come from Liebherr’s Biberach tower crane division, as the company launches a new range of flat-tops, designed to use fibre rope.

Particular highlights of the new EC-B series are the 240 EC-B Fibre and 370 EC-B Fibre cranes.

These are equipped with soLITE high-tensile fibre rope, which has been developed by Teufelberger in cooperation with Liebherr.

Offering an extended variety of options, the CTT 202-10 flat top tower crane gives customers nine different jib configurations from 25–65m to meet varying jobsite needs. With its competitive load chart, the crane delivers a maximum 10t capacity at a length reaching 24.2m, depending on jib set-up, and can hoist up to a 2.3t load at the maximum 65m jib length. Terex Cranes’ Terex Power Plus feature will temporarily allow for an increase of the maximum load moment under specific and controlled conditions by 10%. Depending on tower configuration, the new CTT 202-10 crane delivers a maximum under hook height of 76.7m. At the event Terex will also present a new cabin.

Recom, the independent tower crane company established by the family of Comedil founder Ferruccio Moritsch, will be demonstrating key features of its cranes at Bauma.

For the RMM flat-top line, the company will be demonstrating a newly patented single lift erection system. This allows the counterjib, slew ring, A-frame and trolley, with all ropes, to be erected in one go.

This will be shown at ground level, allowing customers to see it clearly.

The RTT low-top range consists of four cranes ranging from 16t–40t capacity and with jib lengths up to 85m. For this range, the company is demonstrating a new erection concept and a special first jib section that will be standard across the range. The new erection system is designed to make installation faster and simpler. The new first jib section is delivered from the factory with trolley and ropes pre-installed. Recom’s Mariano Moritisch says such a system is new for cranes in this high capacity class.

Comansa will showcase the new 21LC1050 flat-top tower crane, which has been available worldwide since September 2018. This model can load up to 50t and has a maximum radius of 80m. It also has a single-double trolley system with automatic reeving change. A new modular counterjib was designed for the 21LC1050, which allows up to six different configurations to adapt the crane to the needs of each job and increase safety. Thus, when the crane is assembled with a maximum jib length (80m) the counterjib radius is 31m, being able to reduce to 27m (when the jib length is 50m), as it will be shown in the crane at Bauma. The 21LC1050 is delivered with the new CUBE cab in its XL size. At Bauma, an XL CUBE cab will be exhibited at ground level for all visitors to see it from close.

German tower crane manufacturer Wolffkran will showcase the Wolff 6020 clear, the latest member of the clear-family in the 140tm range. The flat-top saddle jib has been in the market since September 2017. It is offered as the 6t version Wolff 6020.6 clear and the 8t version Wolff 6020.8 clear, with three different tower connections per version.

Spanish tower crane manufacturer Jaso will have on display the upgraded J560, with its characteristic short top profile, modular design counter jib and lay flat counter weights. A typical Jaso design with a boom connected to a very short and strong boom tie, which optimises weight and heights for transport and assembly without giving up all advantages of a typical flat top crane. In addition, Jaso will showcase the new JL25, the sole integrated solution of tower crane drivers lift together with the redesigned construction hoist GE1537 as first product from the new construction hoist line.

Manitowoc will also launch a new flat top at the trade fair, but has not given any details. On display will be the 10t MDT 219, which was launched in 2015. At the booth will also be the Cab-IN mast-internal operator elevator was developed with Geda for all Potain K-mast towers of 1.6m, 2m and 2.45m sections. Visitors will have the chance to learn about the new HPL (High Performance Lifting) winch system, suitable for use on a number of topless and luffing jib cranes.

The other is the Wolff 133.8 B 8t version with a tip load capacity of 2.1t. Just like the larger Wolff 166 B, this model can also be operated in the single or two-fall mode. It is fitted with a 25m basic jib that can be extended in 5m increments up to a maximum length of 45m. Thanks to the modular Wolff tower system, it can be built up to a freestanding tower height of 85m. At Bauma it will be present on a City Portal and with an external climbing system. It will be joined by the largest member of the Wolff luffer family, the 1250 B with a jib radius of 80m and a lifting capacity of 60t.

Manitowoc has announced that they will be launching a Potain luffing jib crane at the event, but has not shared any more information to the media.

Saez Cranes will be showing the latest addition to its steadily growing range of hydraulic luffers: the SLH 205 10T. The new SLH hydraulic cranes boast a very tight out-of-service radius and a very fast and simplified erection process.

The SLH 205 hydraulic luffing crane can hoist at speeds of up to 120m/min, and luffs from 15° to 85° in two minutes. The crane has a maximum jib length of 55m, with a tip load of 2.6t. This model features a new Premium cabin, featuring a 10.5in touch screen and the latest in joystick technology.

At the fair, FM Gru will present the 2052 LK, its new tower luffing jib crane with hydraulic piston. The new hydraulic system requires no ropes for installation, the luffing piston is pre-connected at the factory to safe time during erection at job sites. The crane is equipped with duty derrick and easy to assemble. It has a jib length of 52m, a tip load of 2t and a maximum load of 10t with two falls. The crane can also be utilised in one fall, with a maximum capacity of 5t. It can peaked almost to a vertical position: its 85° angle is reached in less than 2 minutes, the out-of-service radius is of 11.3m with maximum jib length.

A number of manufacturers have chosen Bauma to display their latest innovations in selferectors. Liebherr will launch the 125 K, which it says is the largest of its type, designed for civil engineering, commercial, and industrial construction. The crane’s standard hook height of 29.5m can be increased with up to five inserted tower sections to reach 41.5m; with the jib luffed to 30°, the hook can reach heights of 65.5m. At its most compact, the crane’s slewing radius is reduced to 3.2m; where more space is available and more capacity needed, the slewing radius can be extended to 4m, boosting lifting power without requiring extra ballast to be transported. For the new 125 K, Liebherr has designed a new axle system, LiTRAX, which allows the crane to be towed at speeds of up to 80kph.

Manitowoc will launch a new self-erector, and it will also have on display the Hup 40-30. The Hup 40-30, first previewed at Bauma 2016 but now officially launched, has a 40m (131ft) jib and boasts 16 configurations. The crane has a maximum capacity of 4t and lifts 1t at the end of its 40m jib.

Arcomet will be exhibiting three of its own self-erectors, the new A50 Eco, the A47 Eco, and the popular T33C, which features Arcomet’s pioneering telescopic jib, first introduced almost 40 years ago.

The A50 Eco is by far the largest self-erecting crane in the Arcomet range. The crane offers seven different hook heights up to 36m high, with a jib length of 50m, and can lift a maximum of 8,000kg. The jib automatically unfolds at height, reducing space requirements at the building site. The A50 Eco uses telescopic rods for unfolding, to prevent a tangle of cables.

FB Gru will present its new self-erecting crane, the GA 143. It features a 43m jib and has a maximum load capacity of 4t with two ropes. This is the biggest fast-erecting crane in the company’s portfolio. On display will also be a special version of the GA138 with axle. This crane can be transported on the road with full ballast. The GA 138 has a maximum load capacity of 4t, maximum height of 22.5m and maximum jib length of 38m. It can lift 1t at the jib tip.

Visitors at Dalbe’s stand will be informed about its current range of self-erecting bottom-slewing machines with 15 to 45m jibs, with focus on the new DB 747 self-erector. 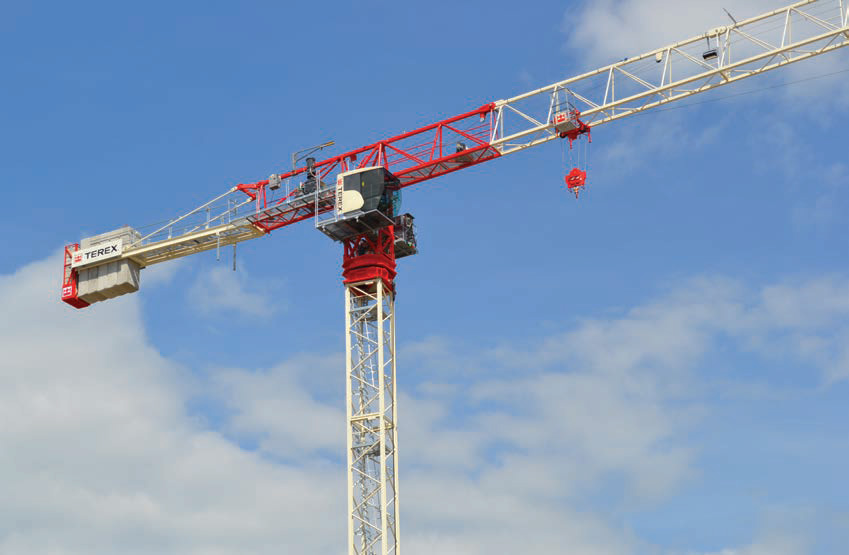 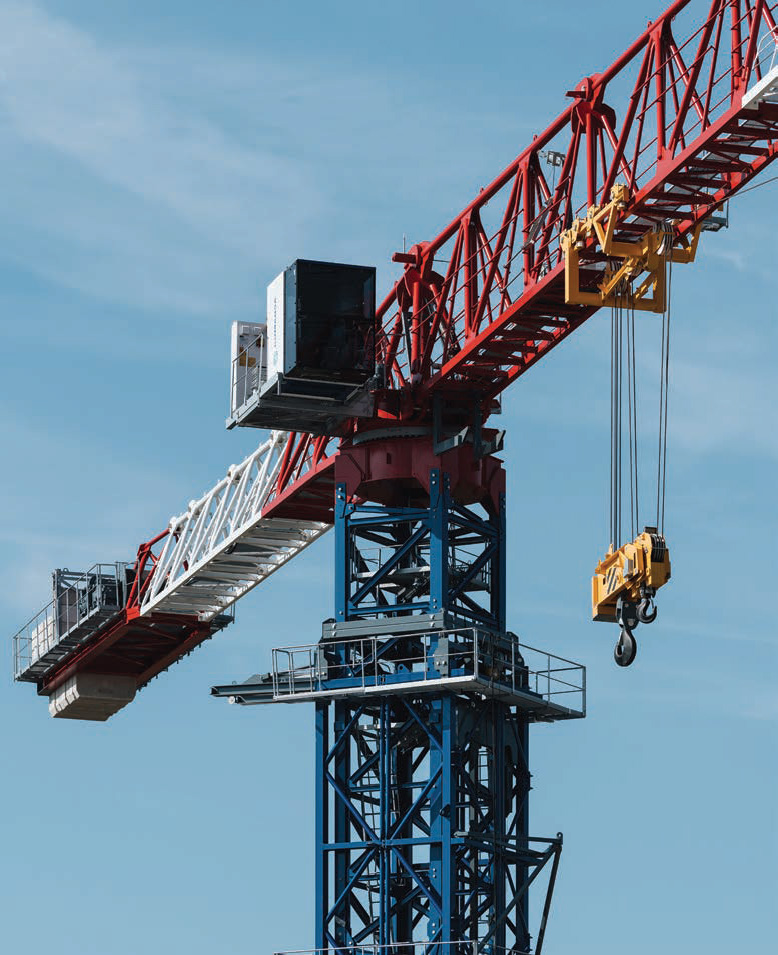 Comansa will showcase the new 21LC1050 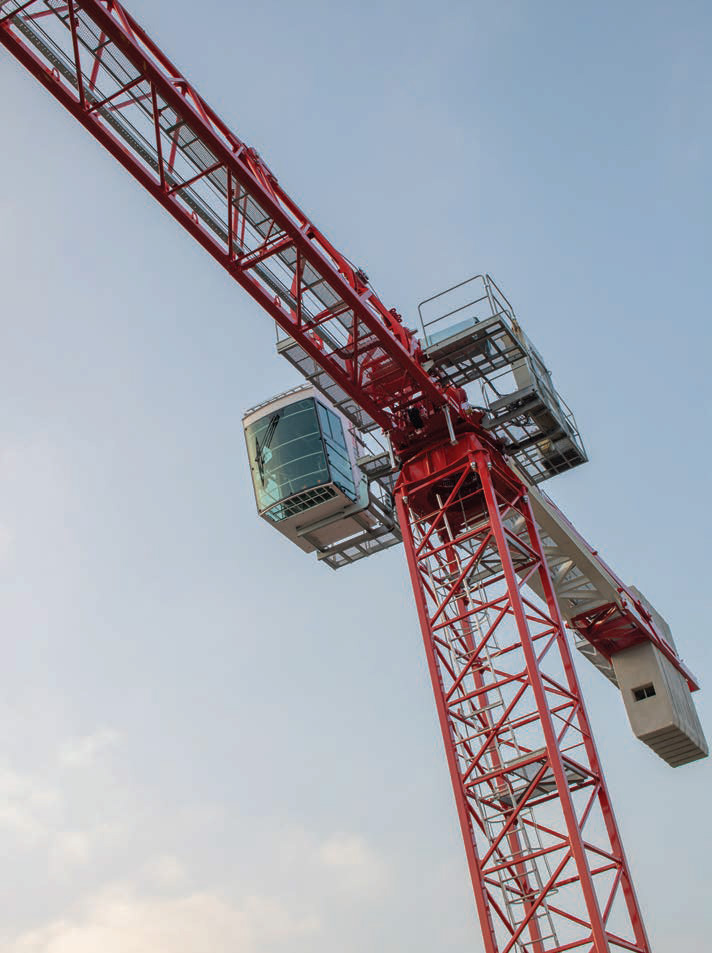 Jaso will have on display the J560. 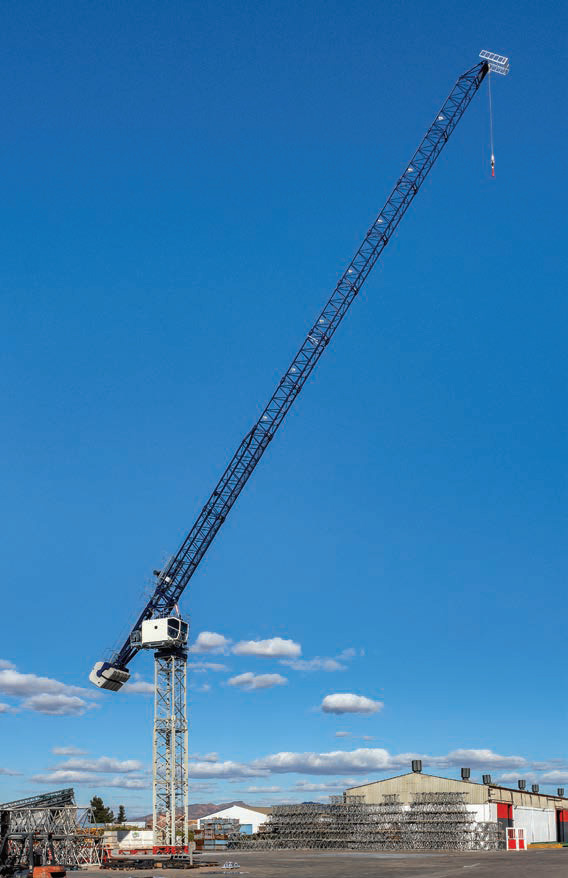 Saez Cranes will be showing the latest addition to its steadily growing range of hydraulic luffers: the SLH 205 10T. 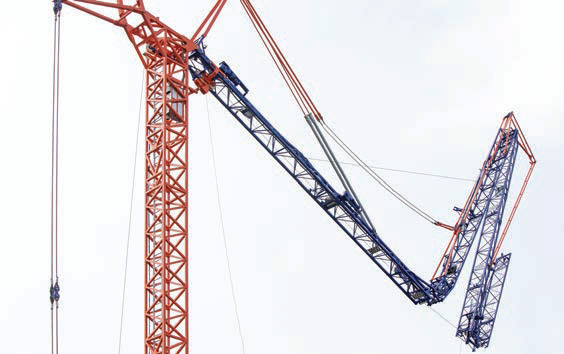 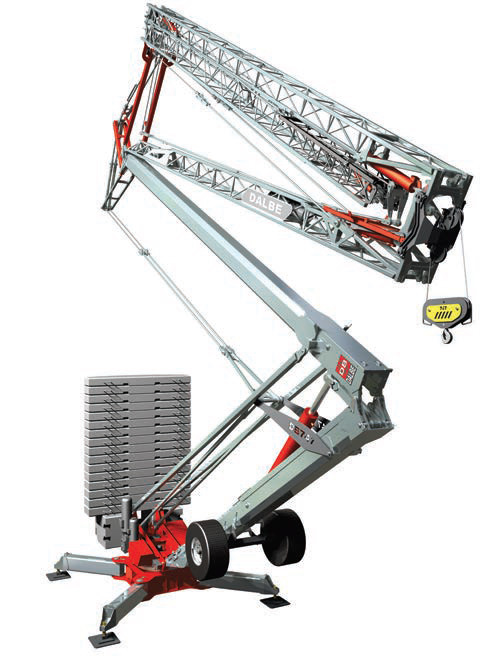