Singapore-headquartered tower crane rental and sales company Crane World Asia has ordered four units of the brand new J1400 from Jaso. The order was celebrated by senior members of both companies at Jaso’s stand at Bauma.

The J1400 is part of the H series, whose characteristic is the short tower top. It has a maximum lifting capacity of 64t, a tip load of 10.5t and a maximum jib length of 80m. The first unit of the J1400 is on its way to Singapore.

Crane World Asia already owns other Jaso cranes but these units will be the largest ones from the Spanish manufacturer in its fleet.

Roger Poon, director at Crane World Asia, said that the reason behind the purchase of such high capacity machines is the increasing adoption of prefabricated prefinished volumetric construction (PPVC), which the Singaporean government has introduced to selected residentialsites since November 1, 2014.

Poon explains that tower cranes need to lift volumetric modules weighing 32t. He said he opted for this particular model because of the very small mast (2.16m) and the short counterjib (18m long). He explained that these are important parameters because of the confined space at local jobsites.

Mikel Iturrioz, sales manager at Jaso, added that the internal climbing system reduces the space used by the crane even further. He also highlighted that the cranes come with the Smartlink system, which allows full monitoring of the crane’s performance, providing thorough and intuitive reports.

Another reason behind the choice of the J1400 by Crane World Asia was that the crane can be shipped in standard containers, resulting in lower transport costs. “Despite having over 200 cranes from another brand, we decided to go with this model from Jaso because it is the only one that meets our requirements,” said June Koh, general manager at Crane World Asia.

Koh said the first unit is planned to be erected in July, with the other three units expected at a later date. Poon added that Crane World Asia will enhance its fleet with more high capacity units in the near future, as there are many PPVC jobs in the pipeline and the outlook for the market is positive until 2030.

Managing director at Jaso, Amaia Susperregui said she feels honoured that someone with Mr Poon’s experience in the industry trusts the company’s equipment.

“We are proud of our products; we have a very powerful engineering team and I think that one of the most important things that we do is to adapt to the needs of our customers,” she added. 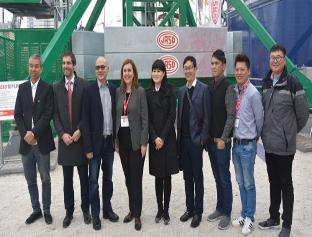