Major jobs around Russia, including for the Sochi Olympics

Yekaterinburg, Russia
Eleven Potain tower cranes are at work at the remote Beloyarskiy Nuclear Power Plant, near Yekaterinburg in central Russia, building a new 800MW reactor for the site.

Since their arrival on site in 2007 the cranes have been working daily sixteen-hour shifts in sub-zero temperatures reaching as low as -40°C to achieve the reactor's scheduled completion date in 2013. Contractors are using the Potain cranes to lift a wide range of construction materials and structural elements such as large doors, made of concrete and armour-plated .

To complete this task a range of tower cranes with up to 10t maximum lifting capacity are being used. There are five MDT 178s, two MD 208 As, two MDT 218s and an MD238 A. For mobility on site a 4t Igo 50 self-erecting tower crane is also being used.

Completion of the project will mean that Beloyarskiy Nuclear Power Plant will once again have two operational reactors, reactors 3 and 4, since reactors 1 and 2 were shut down several years ago. Work on a fifth reactor will commence soon after, dependent on aqequate funding.

Sochi, Russia
Across the Sochi district of Krasnodar Krai, around 50 Potain tower cranes are at work on various projects for the 2014 Winter Olympics. Both Potain's topless crane range and its standard topslewing models are well represented in the selection of cranes at work on hotel construction projects in the area. For one hotel construction project in the Imeretinskaya lowland, Adler near the Olympic Park, two 6t MDT 128s along with an 8t MDT 178 are being used for manoeuvring building materials around site. At another site in Vesyoloe, several three star hotels are being constructed to temporarily house journalists once the competition gets under way. Here a 5t MC 88 works alongside an Igo 50 to complete accommodation ahead of the games. At other onstruction projects in the area there is also a 10t MD 208 A, two MC 235 Bs, plus three 3t MD 125 cranes from the standard top-slewing Potain range.

With construction funding pouring into Sochi ahead of the games, a more recent development is the completion of a temporary cargo port for Port Sochi Imeretinskiy, complete with Liebherr mobile harbour cranes. Sochi's new cargo port is helping the already busy Port Sochi Imeretinskiy to ferry construction materials and other cargo down to the Imeretinskaya Valley, which will be the site of most of the venues for the 2014 Winter Olympics.

Constructed using US$200m under the first public-private investment plan devised for a Russian cargo port, Imeretinskiy cargo port is capable of handling 5m tonnes of bulk cargo, general cargo and container freight each year. Work to construct the only versatile cargo port in the Sea of Azov and Black Sea Basin was undertaken by transport infrastructure specialist firm Transstroy, part of Russian oligarch Oleg Deripaska's Basic Element group of companies. After the games are complete, the cargo port will be retrofitted to be used as a 6-700 boat capacity yacht marina, at a cost of between €50m and €100m.

Igarka, Russia
Roughly 130km to the west of the Port of Igarka in Krasnoyarsk Krai, Russia, Palfinger supplied one of its biggest cranes, a PK150002, to the operator of one of the country's largest oilfields. The Vankor oilfield, operated by Russian state-owned oil company Rosneft, is estimated to hold 520 million tonnes of oil, along with 95 billion cubic metres of natural gas.

Despite having almost increased oil production at the site to Rosneft's 18 million tonne target for the end of this year, a challenging 25 million tonne production target for 2013 means that any equipment used to facilitate work on site needs to be high performance.

Rosneft opted for a Palfinger PK150002 mounted on a DT-30PPMN Vityaz off-road vehicle, a carrier suited for operations in the harsh, rugged environments of Eastern Siberia. The crane has been at work at the Vankor oilfield since 2009. 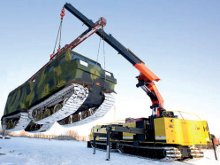 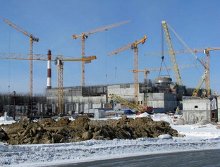 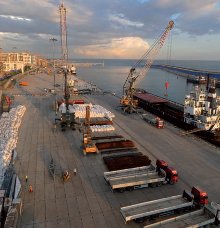