Felbermayr supplied lattice boom and all terrain cranes for the expansion of a wheat starch factory in the Lower Austrian town of Pischelsdorf.

As the starch producer Agrana’s factory is directly on the Danube, it was possible to transport components from Bulgaria to the factory in Pischelsdorf via the river. Once they had arrived there, the four 136t containers were separated from their destination in the factory by just a few hundred metres.

A 750t Liebherr LTM 1750 and a 400t Grove GMK 6400 were used to unload the ship. "Because of the tight space it was difficult to position the two cranes ideally", says project manager Peter Niedermair-Auer. "It was certainly clear that the transport vehicle would have to be positioned behind the cranes as otherwise the extension of the crane jibs would be too great."

As a result, the containers had to be passed between the two cranes after being lifted from the deck of the ship before they could be set down on the 13-axle low-loader with vessel bed on the other side.

After the load has been secured the containers were transported to their destination, just a few hundred metres away. Numerous pipe bridges, tight-radius bends and some unmetalled sections made the transport more difficult. It was primarily the two 30m long and 5.1m high falling film evaporators that gave the technicians a real challenge when planning the route.

"Together with the tractor unit, the transport reached a length of 42m and a height of 5.85m", said Niedermair-Auer. A local inspection revealed a pipe bridge with a height clearance of just 5.9m, so just five centimetres higher than the transport height.

"For such cases, we can use a program for route planning if necessary in addition to a local inspection. This enables us to draw up concrete route section profiles and simulate critical clearance profiles with a three dimensional model. In this case numerous steel plates had to be placed thanks to the knowledge gained, as both the tractor unit and the trailer with vessel bed often had to leave the metalled road in order to manage the bends”, said Niedermair-Auer.

After the first of the two falling film evaporators was transported to the newly erected foundation, it was first unloaded and then set down on the ground with the help of a Liebherr LG 1750 and a Grove GMK 5250L. This was done together with a total of five transport saddles with which it arrived on the barge.

The 30m long container had to be rotated from horizontal to vertical in order to be set down on the foundations. To do so, the hook block of the lattice boom crane was attached to what would become the upper end of the container and the truck-mounted crane with telescopic jib onto the bottom end.

"For the actual lift, firstly both cranes took the strain on their ropes and lifted the container up by approximately 50cm. Then the lattice boom crane worked until the steel colossus was vertical. Now the hook of the follow-on crane could be attached. Then the main crane swivelled the load single-handedly over the foundation and set it down with millimetre precision. Thus the first falling film evaporator was successfully lifted into place,” Niedermair-Auer explained.

The next day, the transport of the second followed with subsequent foundation installation.

The two smaller containers, designated as separators, were then transported and will be lifted at a later date. Since the weight was significantly less at 40t and a length of just over ten metres, this lifting task could be undertaken with just one crane. The factory expansion should be operational by the end of 2019. 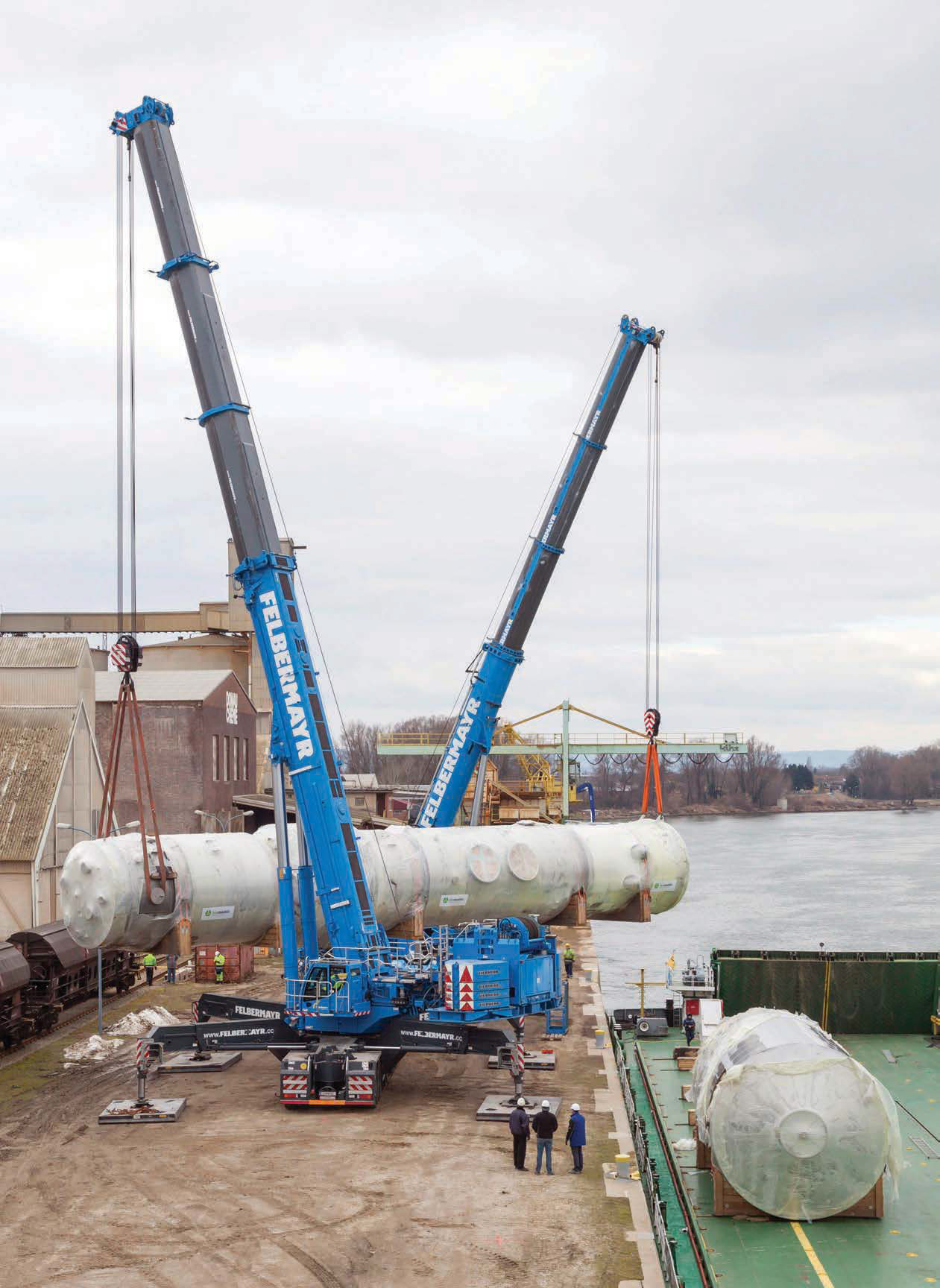 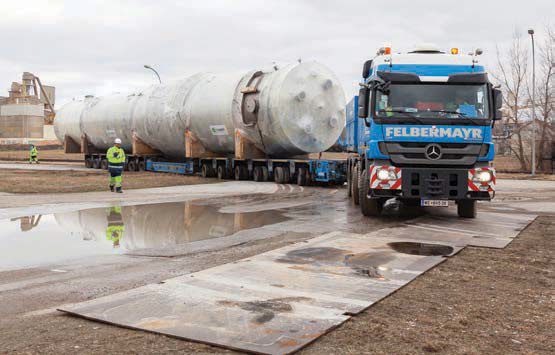 A 13-axle low-loader with vessel bed for transporting the components within the site. 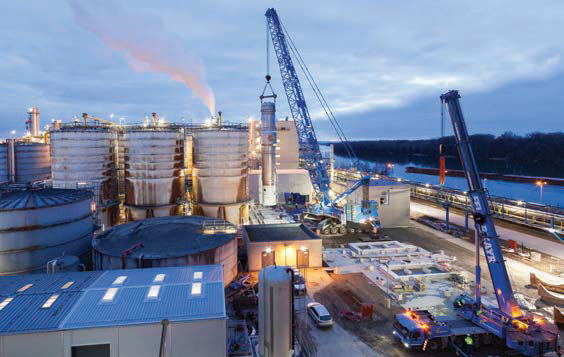