From an apprenticeship in Doncaster’s coal mines, to CEO of one of the world’s leading tower crane manufacturers, Duncan Salt’s career shows the opportunity offered by the crane industry. Will North spoke to him at the company’s HQ in Switzerland.

Salt’s rise to the top started as low down as a job can get: 865m underground, as a 15-year-old underground apprentice at Markham Main colliery. It was as tough a job as you can do in a modern industrialised country: kneeling, or on your back, in tight conditions, wielding a heavy breaker. Salt describes the conditions: “You’re underground for hours, working at temperatures of 40°C. You’re cut and bruised on a daily basis, occasionally breaking bones or worse.” In 80 years of operation, 87 miners died in the mine.

And he entered the industry at one of the toughest times in British labour relations. After a series of governments had been challenged by union action through the 70s, Margaret Thatcher’s government moved to cut coal subsidies, which would inevitably lead to pit closures. The miners, under Arthur Scargill, went on strike for a year. Markham Main was at the heart of the dispute, with miners like Salt the first to go out, and the last to return to work.

Despite the conditions, the mines were good for many: in Doncaster, home to Markham Main, there were once 13 pits, each employing 1,500 men, on the sort of wages that could support a family. Those days are long gone, but Doncaster has seen a resurgence: it’s now a centre for freight and logistics, making the most of its transport links. It is also the site of Wolffkran’s new UK headquarters on a 26ac purpose built site.

Salt stuck with the job for three years after the strike, moving first to Hatfield as the collieries closed and downsized, and then, after badly breaking his shoulder in 1988, deciding it was time to quit.

His career path continued to wind. Next, he opened a bookmakers. “I’d always been pretty good at maths,” but, he says, “The town was dead.” So, he moved to London, taking a job as a bookies’ clerk at Wimbledon dog track. “It was a good life,” he notes, and, contrasting it with the pit, “Out in the sun.”

From there, came jobs at Cheltenham and Goodwood, and, in his spare time, a degree in mechanical engineering. That led to a job at Swift Structures, while at the same time taking on bookmaking pitches at seven or eight race tracks.

What did he learn from this circuitous path? “There’s no degree in plant hire. You have to rely on a bit of guile, a bit of experience learnt on the way. Going to work at an early age, doing physically demanding work, sharpens your sense. If you listen, there’s a lot of old guys who know a lot, and it’s not all in a book. When you then meet people who buy and sell cranes, you know quicker how their world works.”

And the fast-paced world of on-track betting had its lessons too. “The maths on a racecourse isn’t difficult, but you need to be quick.” It teaches a tolerance of risk, too, and of how to make the best of the odds. “Risking your own money hones your sense of commercialism. It helps you know how to put a win-win deal together quickly, and gives you a familiarity with margins and percentages. Bookmakers don’t always win and neither should they.”

He’d set foot clearly on his career now. From Swift, via a couple of other roles, came a job at O’Rourke. There, he worked on one of the UK’s most notable jobs of the decade, the 2004 offsite fabrication and strand jack lift of a passenger bridge over the taxiway at Gatwick Airport. A year later, Paul Collins at Terex Comedil supplier Select asked him to join the firm, even though there wasn’t an immediately defined job for him.

That role took him into the world of tower cranes where he worked for a number of years under Mike Studd. From Select, he moved to Wolffkran dealer and tower crane supplier HTC, and then up to the board of HTC parent company PC Harrington (HTC’s initials stand for Harrington Tower Cranes). The company was going through tough times: the challenges might not have been as intense as entering a pit with the miners’ strike looming, but it was certainly a time of transition. PC Harrington had debts for the first time in their history, and Salt’s role, he says, “Was to reshape the business, to get Pat [Harrington] back to where he needed to be.”

In 2015, PC Harrington sold HTC to Wolffkran; Salt followed later on that year, taking a role heading up international sales. In that role, he built the company’s transatlantic business, helping it reenter the US, and then becoming overall head of sales. When, in autumn 2019, Peter Schiefer decided the time had come to focus on Wolffkran’s overall strategy, rather than splitting this corporate role with the daytoday running of the business, Salt was appointed as CEO.

One of the challenges for the UK tower hirer had been oversupply of equipment, as the country’s building industry struggled in the wake of the global financial crisis. Wolffkran’s combined role, as both manufacturer and hirer, working internationally, can be seen as a way around the challenges faced by national tower crane fleets in times of crisis.

But the benefits go deeper, Salt says. “Sales and rentals really, really, works. We’re a rental business in seven markets in Europe, but also sell in those markets. Our rental business knows what the local market needs, faster than any crane designer can. Operators, maintenance crew, and other staff will give their feedback immediately. Having our own people work on our machines allows us to build and sell a better crane.

“Customers can buy a crane for one job, then hire additional components for the next job, as they need, at short notice.”

This feedback from the field has shaped innovation at Wolffkran. One example came recently with the company’s investment in fibre rope supplier Trowis. The crane manufacturer will be using Trowis’s selfmonitoring ropes in for luffing, as well as for hoisting.

Salt explains, “Because we have our inhouse erectors and service technicians, [we saw that] fibre rope lends itself equally to luffing than hoisting. The weight saving is one thing: not quite like hoisting where it adds more directly to lifting capacity. But it has more benefits on the luffing system in terms of ease of use, for inspection and installation. It’s far easier to handle, say when reeving the rope in awkward positions. And, when you have to inspect rope on a periodic basis, there’s a lot you can’t see.” A lightweight, selfmonitoring rope on the luffing system address both issues.

Wolffkran’s, and Salt’s, daytoday familiarity with the needs of the rental business will also shape a whole new family of tower cranes, designed with interchangeable elements to make it much easier to change a crane’s set up. “If the local model [of construction method] changes, say from insitu concrete to precast, an owner can easily upgrade the crane, rather than it becoming redundant,” Salt says.

The principle is already used on Wolff’s 630tm rope luffers, which can be upgraded to a 700tm crane with just a change of winches. But the new family of cranes take this further. Coming first, in the second quarter of 2020, will be a flattop with 80m of reach, aimed at industrial construction. At launch, this model will be accompanied by a new set of lightweight jib components, which can be used to transform it into a 100m reach, but lower capacity, crane.

Salt sees a strong link between advancing technology and the lifting industry but says the true strength of Wolffkran is its people and here, the company will be maximising their impact. 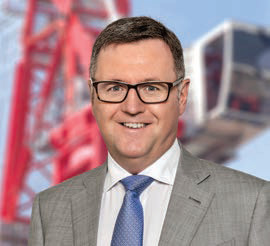 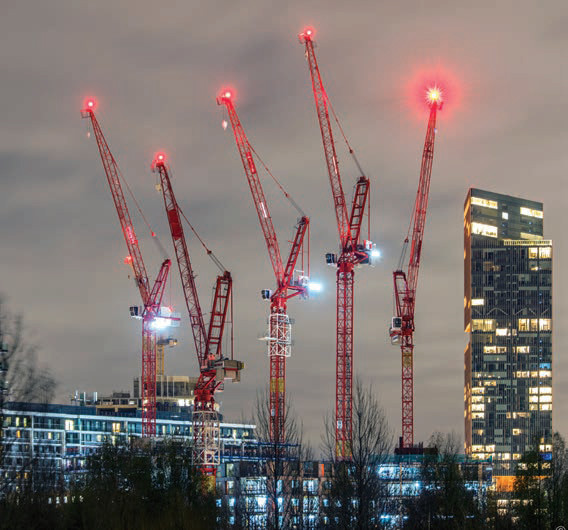