Off road to Munich

Over the past few years, rough terrain manufacturers have invested in enhancing their portfolio, with the majority of new models belonging to the higher capacity classes.

At this year’s Bauma nearly all major rough terrain manufacturers, with the exception of Liebherr and XCMG, showcased one or more models. However there was only one official launch at the major European show, which came from US manufacturer Link-Belt.

Bruce Kabalen, marketing communications manager at Link-Belt, highlights the one0020person fly erection technology with ground controls for fly assist and boom hoist cylinders. He says this reduces the amount of people needed for setting up the crane, and enhances safety by preventing work at height. Kabalen adds that this innovation was first featured in Link-Belt’s telecrawlers.

This is the second rough terrain model the manufacturer has introduced in less than a year.

“There are a lot of similarities between these two models, so the product cycle was not very long,” says Kabalen. All three models of the new generation of rough terrains (75|RT, 100|RT, 120|RT) feature: a 24-volt electrical system, which makes diagnostics quicker; a V-CALC (Variable Confined Area Lifting Capacities) system featuring 81 different outrigger configurations with real time 360° charts; a new cab design with enhanced visibility and operator comfort; and Link-Belt Pulse 2.0, which provides a simple interface for crane operators with a 10in touchscreen display.

This was not the only 120USt rough terrain at Bauma grounds, as parked at Tadano’s stand was the GR-1200XL. This model has a maximum boom length of 183.7ft and a maximum jib length of 58.1ft. Ingo Schiller, president and CEO of Tadano America, says it has the longest boom in its class.

“In addition, the compact carrier, smart chart, the ability to have asymmetrical outrigger systems, and tiltable cab, provide the operator the tools, convenience and comfort to do the customer's work,” he adds.

Another rough terrain crane at Tadano’s stand was the GR-200EX, which was especially designed for the Australian market. It has a maximum lifting capacity of 20t, maximum boom length of 27.5m and boom extension of 4.5m/6.9m. Manitowoc also presented two rough terrain models at its stand, the 51t Grove GRT655L and the 100t Grove GRT8100.

The GRT8100, which made its debut at Bauma 2016, has a 47m five-section boom. With a full complement of boom extension and insert options, the crane has a reach of up to 77m. The GRT655L has a long 43m main boom, and maximum reach of 59.7m. All the GRTs feature Manitowoc’s Crane Control System (CCS).

The GRTs are the new generation of cranes and have gone through a whole host of liability and component testing at Manitowoc’s Product Verification Centre.

“We test every component, we can simulate all conditions in terms of temperature, cycles, vibrations, salt resistance and corrosion. Reliability has improved a lot, we are so confident in the product that we are now offering two years standard warranty on the GRTs,” says Federico Lovera, product manager rough terrain cranes for Europe, Middle East, Africa and Asia-Pacific at Manitowoc.

At Terex’s stand was the RT 90, which was launched at Bauma 2016. This model has a maximum capacity of 86t, maximum boom length of 47m and maximum tip height of 66m. IC-1 controls provide easy operation, smooth control and integrated diagnostics, while the removable counterweight lets operators move quickly from job to job. The unit on display was sold to Italian Terex dealer Tecno-Gru. Italian manufacturer Locatelli showcased its 47t (52USt) Gril 52.47 rough terrain crane with a hexagonal boom. This two-axle crane has a maximum boom length of 32.1m and maximum boom height of 50.7m. It is 12.24m long, 2.5m wide, and 3.47m high.

Locatelli’s sales manager Michele Mortarino says that the new safe load indicator, developed by 3B6, and which has been featured in Locatelli’s truck mounted cranes, will be incorporated in the rough terrain cranes in the last quarter of the year. “It is a multifunctional, 10in touch screen display with a completely customized design and a new GPS control. The operator can see, among other parameters, boom length, working angle, working distance, height, load, load limit and information about the engine.” He added that the rough terrain cranes will soon be available with Tier V engines.

Chinese manufacturers Zoomlion and Sany also chose to present models from their rough terrain lines at the trade fair.

Zoomlion adds that the machine has passed rigorous operational and traveling reliability tests, and that it conforms to international standards such as CE and ANSI.

It has a five-section U-shape crane boom which can reach 47m and a maximum lift moment of 2,820KN.m. Its maximum fixed jib combination is 47m + 17.5m.

Sany says this model features an intelligent dual-pump hydraulic system with diving and combining flow, as well as an independent oil pump for luffing moves to reduce compound shock. The manufacturer says the electric-proportional control system is capable of automatic fault diagnosis.

Sany says the SRC900C has an optimised ratio of upper and lower boom sections and U-shape crosssection for better bend resistance and lighter weight.

Link-Belt’s Kabalen says the demand for higher-capacity rough terrain cranes has changed the major manufacturers’ portfolio over the years, with very few models produced under the 50t capacity. The 50USt RTC-8050 Series II is actually at the bottom of the Link-Belt’s line.

He says the largest market is for rough terrain cranes with capacities between 90 and 110USt.

Talking about the 120|RT, he explains that the manufacturer went for a slightly higher-capacity model to meet the demands of some North American customers.

Lovera says the response to the new GRT9165 has been very positive. “We are fully booked already with Stage 5 units for North America and we will be starting production with the less regulated engines for export next year.”

This regional market has been performing very well, triggering good sales for crane manufacturers. “The North American economy, particularly the US, has been doing very well and Tadano America has been able to leverage the strength of this regional market… We continued to build on our previous years' growth and we had a good 2017, a healthy 2018 and we are enjoying a very strong 2019,” says Schiller.

The GR 1200XL at Tadano’s stand was the latest purchase by Bigge, which Schiller said has purchased more than 100 rough terrain cranes in the last twelve months and has already put the majority of these cranes to work.

“With an uptime of over 99% and utilisation reported by Bigge of over 90%, the Tadano RTs have earned their place in Bigge's fleet every day.”

Liebherr, who re-entered the rough terrain market two years ago, has also seen an increase in sales in North America, with the US being the biggest market for its LRT crane line.

Marketing manager at Liebherr Wolfgang Beringer says the requirements of this market were taken into consideration when developing the new LRT cranes.

“The development of the new generation of Liebherr rough-terrain cranes was preceded by extensive market surveys and analyses into the requirements for modern RT cranes, particularly in the main market of North America. In addition to the capacity of the cranes, their safety— particularly their safety resulting from ease of operation—was one of the main focal points for the development of the new cranes.”

As to whether the company experienced challenges returning to the market after a period of absence, Beringer says: “As the market was served by our competitors, our challenge was to offer additional value on rough terrain cranes cranes, like higher safety.”

Both new crane models feature an outrigger monitoring system as standard. The support status, on tyres or outriggers, is detected automatically and saved to the crane controller. The attachment of the ballast to the turntable and the installation of the optional double folding jib including its angle adjustment are also recorded and monitored. The VarioBase variable support base developed by Liebherr as standard on the new LRT cranes makes an important contribution to enhancing safety.

Beringer tells Cranes Today that Liebherr is planning to extend the LRT line in both directions.

Apart from developing products attractive to the US market, the German manufacturer has also invested in developing a regional sales and service network.

Beringer says this network has helped sales of rough terrains as well as all terrains and crawlers, as it offers high customer proximity and faster response time.

Marco Busconi, Terex’s engineering director for rough terrain cranes at Crespellano, Italy, says the biggest markets for the rough terrains produced at the facility are the Middle East and Italy.

“In the future, after the closure of our Oklahoma City rough terrain production, we will focus on North America,” Busconi adds. He says at the moment the RT 90/RT 100US is the most commercially successful model of the range.

The Middle East is one of the strongest markets for Italian manufacturer Locatelli, alongside Africa (mainly central African countries) and some countries in the Far East. Mortarino says Locatelli is interested in the US market and that they are in discussions with potential partners there.

Manitowoc’s Lovera says the most popular model across the range is the 100t GRT8100. Talking about the GRT655L, he said that this size of machines is very popular in Middle East and South East Asia too, especially for maintenance jobs. “Due to its width below 3m, it’s perfect for European markets as well,” he added.

The majority of Grove rough terrains for markets outside the US are now produced at Manitowoc’s production facility in Niella Tanaro, Italy. The booms used in the rough terrain cranes come from the all terrain factory in Wilhelmshaven, Germany, where they have a strong expertise in manufacturing them.

It was interesting to see that only an American company launched a new model at the European show. However the market is not short of new models and the manufacturers seem to focus, apart from enhancing capacity, on upgrading the technology used in these cranes. As the US market is dominating sales for some major manufacturers, it will be interesting to see if they will be launching new products at ConExpo next year. 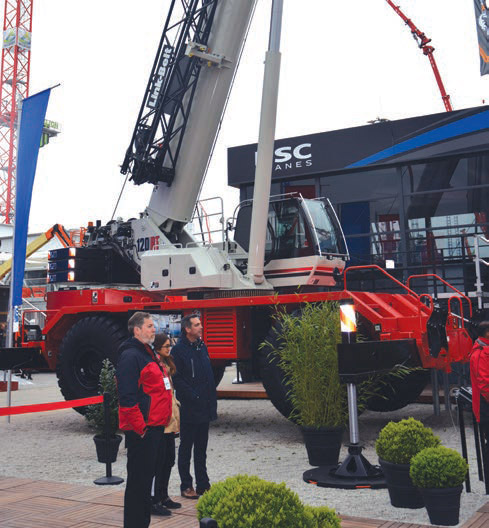 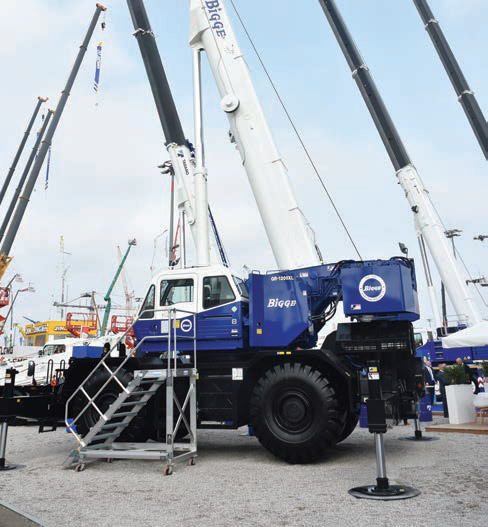 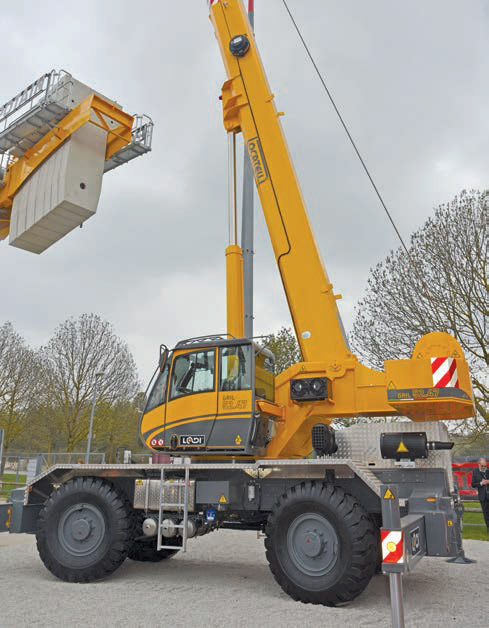 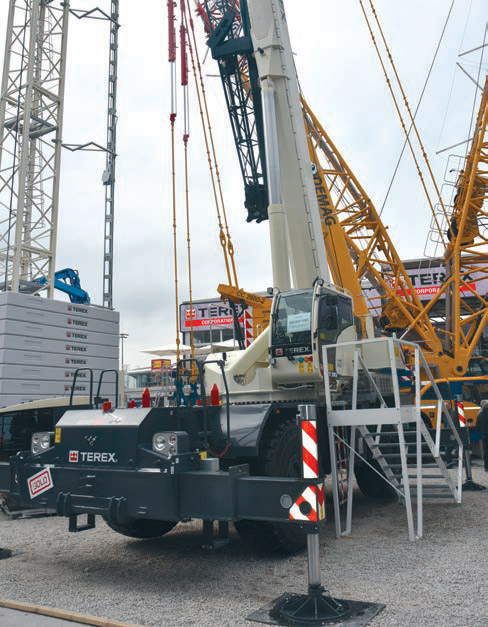 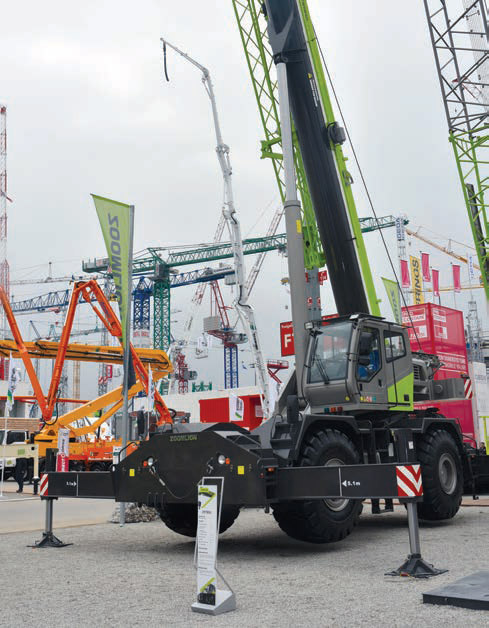 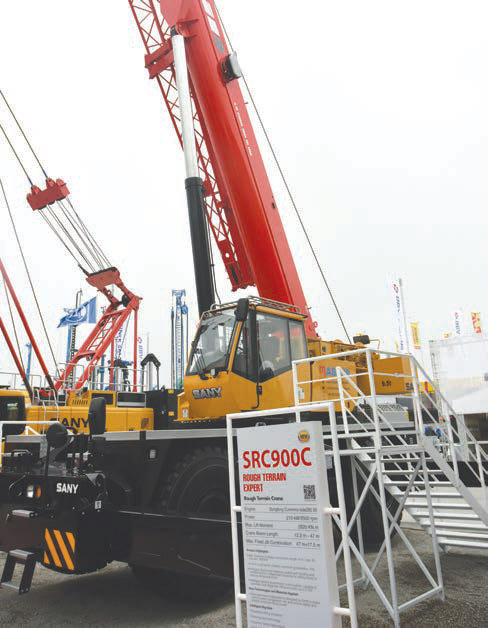