On land and water

In Gothenburg, a Skanska MT Højgaard joint venture used a floating sheerleg and land-based crawler in tandem to lift sections of the new Hisingsbron, or Hisingen bridge.

Gothenburg is Sweden’s second city, and its leading port. The river Göta flows through the city, into the Kattegat, the section of the North Sea between Denmark’s Jutland peninsula and Sweden. In 1937, work started on a bridge to connect the island of Hisingen in the north of Gothenburg, home to the harbour, with the city centre, south of the river. The old Götaälvbron (in English, the Göta river bridge), features a bascule section, which tilts up to allow ships to pass. After more than 80 years, the bridge’s steel is now showing its age and the bridge is approaching the end of its service life.

The City of Gothenburg held a competition to select a design for the new bridge, which was won by Copenhagen architects Dissing + Weitling. The new bridge is lower than the old, reducing the space needed on land. Like the old bridge, however, it needs to allow ships to pass. Rather than the bascule of the old bridge, the new Hisingen bridge, or Hisingsbron, features a 28m high vertical lift section, raised at each corner by four pylons. A joint venture of Skanska and MT Højgaard was selected to build the bridge. MT Højgaard’s heavy lift specialist Mogens Schibby Kjeldsen was responsible for lift planning on the project, and explained the job to Cranes Today.

Kjeldsen explains that the overall weight of steel in the rivercrossing section, named Arpeggio, comes to 2,300t. Two crossbeams weigh 1,250t; the four upper pylons come to 460t, there are four 175t counterweights; and the lift span weighs 650t. The bridge span comprises 42 steel sections, weighing up to 146t.

The steelwork for the bridge was fabricated by URSSA, based in Vitoria-Gasteiz in Spain’s Basque country. From here, they were loaded onto a ship in Bilbao and shipped in four transports to a temporary storage area on the north bank of the Göta. Moving the heaviest sections, the 625t crossbeams, from the ship to their concrete foundations was performed using SPMTs from ALE in 4 x 8 configuration. All of the sections over the river were lifted using the 300t floating sheerleg HEBO Lift 7, from Dutch company HEBO Maritime. They were transported to their pick-up position on two 12-axle Mammoet SPMTs.

On land, on both sides of the river, the JV used a 300t Liebherr LR 1300 crawler, supplied by Havator Sweden.

The crawler and sheerleg worked together on the heaviest span section, weighing 146t. For this unusual land and water tandem lift, the HEBO Lift 7 lifted 76t and the crawler 68t. The lift took place on Sunday 5 January 2020, exactly as planned. The final six sections were successfully installed the following weekend, 11–12 January. The next big task will be installation of the upper pylons. This will be performed from the top of the bridge crossbeam, using a Liebherr LTM 1750. After this, ALE will install the lift span later this year.

Kjeldsen highlighted two key challenges on the job. First of all, the LR1300 on the banks of the river needed to work on soft clay, which provided poor support for the crane. Skanska’s geotechnical department designed special load spreading tracks for the crane, comprising a 200mm layer of 6m soft wood, 6m x 6m steel frames, and a layer of 200mm hardwood mats, placed on top of a layer of gravel. Ahead of every lift, the level of the load spreading track was to confirm it was as designed.

A second issue was storage of the six heaviest bridge sections, all used on the south side of the Arpeggio section. The design required that the north side of the bridge was constructed first. This blocked the HEBO Lift 7, preventing it lifting the sections from the storage area on the north bank. Instead, the sections were loaded onto two barges, supplied by Mammoet and Sandinge, until they were ready to be lifted.

The bridge is scheduled to open in 2021, when the City of Gothenburg will also be celebrating 400 years since its founding. 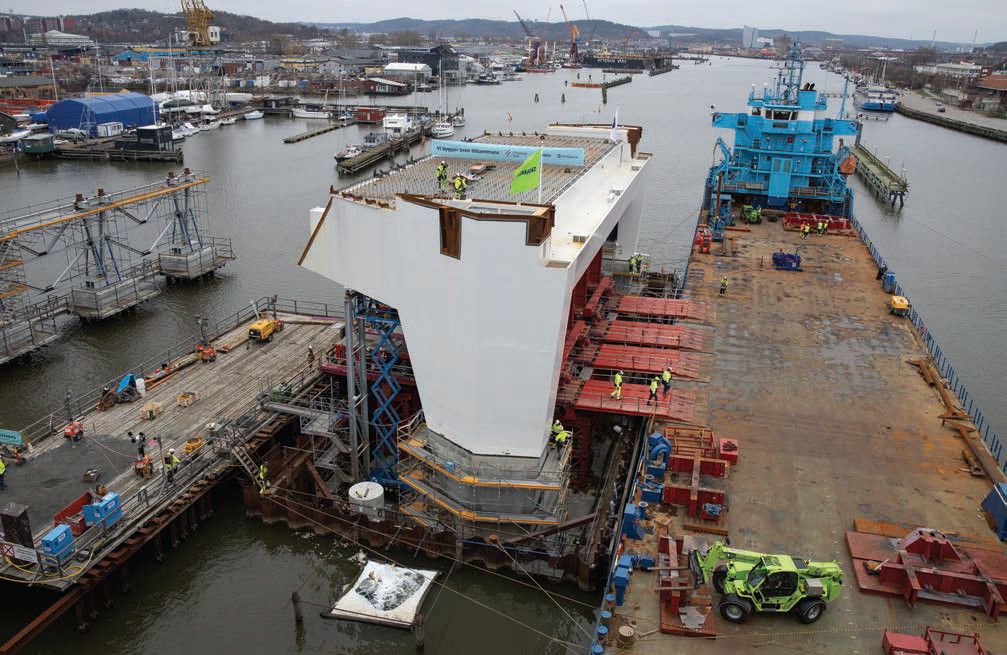 The 625t crossbeams were transported directly from the transport vessel Meri Aura to their concrete foundations using SPMTs from ALE. 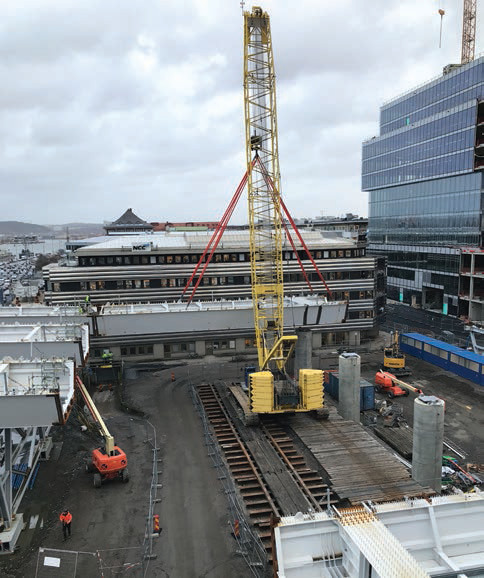 The LR 1300 at work, on the load spreading track designed by Skanska. 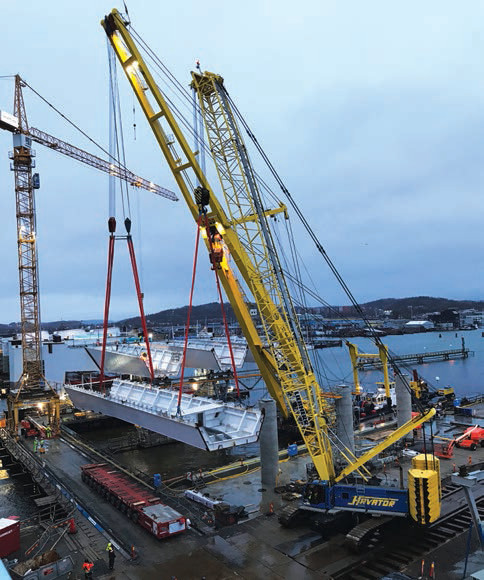 The HEBO Lift 7 and LR 1300 performed a land and water tandem lift to place the largest span section.