One of the most famous innovators in the crane industry is Franc Jost. His son Alexander describes him as someone always looking for a new crane design to optimise erection and operation as well as the cost of production.

Franc worked as a lead engineer for well-established brands such as Peiner, BKT and Comedil. Some of his design concepts can be seen today in cranes of many manufacturers around the world.

“In 1990, my father designed his first topless crane; an innovative design which enabled a group of cranes to sail over one another with minimum clearance, unlike conventional hammerhead cranes. The absence of suspension bars also means easy and quick assembly with minimum lifting, all of which translate to a tremendous reduction in erection time and cost,” says Jost.

In the year 2000, Franc decided to set up his own company and founded Jost Cranes. In 2004, the company introduced its first crane model, the 12t JT 312 topless trolley crane. This again was a new crane concept for the market. Soon after, Jost Cranes launched its first conventional luffing crane, the 16t JL 216. In 2005, the company surprised the market with the introduction of another new crane type, the hydraulic luffer.

“After Jost Cranes successfully placed the topless trolley jib in the market, my father had the idea to transport this concept to the luffers as well. By eliminating the tower top, the solution with the cylinder was a logical consequence. Initial market launch was in November 2005 with the model JTL 108,” says Jost.

The advantages of this crane type in association with oversailing rules made it quickly very popular in the UK market, especially for jobsites in cities where space is limited like London.

The company expanded its range, which now comprises eight models with capacities from 50–300mt. “The best-selling model is the JTL 158, with 81 units sold. The demand for larger models in the 200–300mt range arose in 2015, and the JTL 268 and JTL 318 models were developed. In the beginning, the models with 2/4 reeving in the hoist rope, were in demand. In the last few years, the trend has been towards 1/2 reeving. Due to construction sites with taller buildings and thus greater tower heights, faster lifting speeds are also advantageous,” says Jost.

He believes that the hydraulic luffers could eventually replace the conventional luffers in the capacities they are competing. “I believe this is possible up to load capacities of 250tm.”

Jost Crane’s 300mt JTL 318 is the largest capacity hydraulic luffer offered in the market. “The JTL 318 model is ready for serial production. We have numerous enquiries from Australia and the UK, but all projects have been delayed due to the Covid-19 situation. We expect the first crane to be shipped in early 2021.”

Jost believes that for capacities of more than 300mt, the conventional luffer will remain the main choice for years to come.

“The hydraulic luffer is characterised by its cost efficiency, both from the purchasing and the operating side, enabling quick assembly and dismantling even in dense construction sites. At the moment, the size of 300mt has reached the limit of economic efficiency. Technically it is not a problem to develop larger hydraulic luffers, but based on the arguments outlined above, currently it does not make sense.”

On the other side of the spectrum, the manufacturer recently launched its smallest hydraulic luffer, the JTL 68.4s, which has an out-ofservice radius of 4m.

The hydraulic luffer market has become congested over the last decade, as many manufacturers have launched their own models. Jost says he anticipated that many other players would enter the market, as it is a strong concept and there was no patent. He was not surprised that it took them a long time to complete their models, as he knows the complexity of the crane control and hydraulic system.

“Concerning the large variety of hydraulic crane suppliers today, we think it is beneficial for the market because product competition will always drive innovation and help to make crane operation safer and more efficient. In economic terms, Jost Cranes does not fear the competition, since we have been manufacturing hydraulic luffers for over 15 years now and we have the largest variety of hydraulic luffers in the market, ” says Jost. “In the end we have the most experience in the market. We know everything that can happen with the hydraulic system because we had all the problems you can probably have with the hydraulic system and we have fixed every issue, and now our cranes are operating perfectly and - most importantly - safely.”

He adds that the competitors have found a saturated UK hydraulic market, as it is dominated by Jost Cranes, and that they are looking into different markets, which could help in making this crane type more popular in other countries. Jost Cranes has received some enquiries from the US and they are currently looking for a dealer there. Another market where they are expecting increased demand from is Australia.

Apart from the hydraulic luffers, the company also offers the JL line of traditional luffers, with capacities ranging from 200mt to 600mt. The best-selling JL crane is the 16t JL 316, while the latest model is the 32t JL 616.32.

Jost Cranes has invested heavily to enhance the technology of their cranes in recent years. “The focus of the latest technical developments was on the electronic control and the electronic monitoring systems, such as: FU control in all drives; remote maintenance, the ability to dial-in via your own cloud for remote diagnosis; newly designed crane controls and displays; new safety sensors for hoisting and jibbing mechanism and an upgraded black box,” says Jost.

When it comes to new products the company is following the approach of Franc Jost, to decrease crane weight—saving material cost and transport cost— and to minimise the structure to keep the crane compact for easy assembly/erection/dismantling and again reduce transport costs.

“So we made all of our cranes with the imperative in mind to enhance ease-of-use, safety, maintenance and overall cost efficiency.”

Jost Cranes recently launched its smallest hydraulic luffer, the JTL68.4s, which has an out-ofservice radius of 4m. 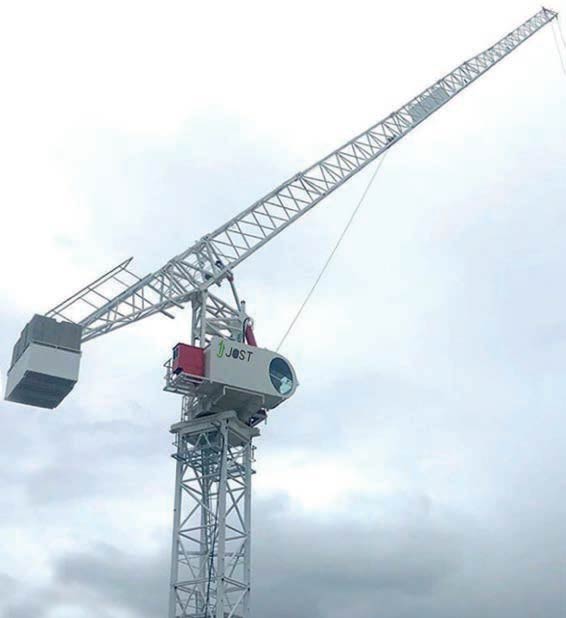