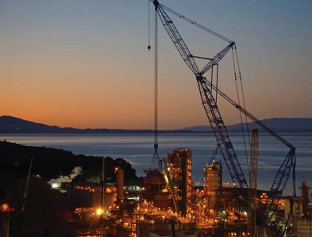 Lampson - Three generations of giants 14 December, 2018 Lampson International is a third generation family owned and operated heavy lift and heavy haul construction corporation. Started in 1946 by Neil and Billie Jane Lampson, this once small crane and drayage company grew to be one of the largest and most well respected heavy lift companies in the world. Kate Lampson explains the history of the company, and its current offering. > read more

USA projects round up 20 November, 2017 This month we review projects from California, Kentucky, Washington, New York

Bringing it all together 20 November, 2017 In recent years, Maxim has merged with AmQuip, acquired heavy lift and transport specialist Crane Rental Corp, and most recently, bought the assets of Essex Crane and purchased Essex subsidary Coast Crane. Will North spoke to COO Frank Bardonaro about the development of the business

Sustainable lifting 20 November, 2017 Will North spoke to Link-Belt CEO Melvin Porter, as he approached six months in the job, about building a sustainable crane business.

Cranes and lifting in Las Vegas 23 January, 2017 This year’s big show is ConExpo in Las Vegas. In this issue, we look at a selection of the crane exhibitors at the show. In February, we will have more cranes, along with related lifting and special transport equipment.

Sponsored: A family of giants 21 December, 2016 Lampson International is a third generation family owned and operated heavy lift and heavy haul construction corporation. Started in 1946 by Neil and Billie Jane Lampson, this once small crane and drayage company grew to be one of the largest and most well respected heavy lift companies in the world. Kate Lampson explains the history of the company, and its current offering.

Manhattan transfer 07 September, 2015 The new 432 Park Avenue in New York City currently stands as the tallest residential building in the Western Hemisphere. Earlier this spring Able Rigging Contractors (based in NY’s Long Island) was tasked with dismantling and lowering a Potain MR415 electric tower crane from the roof of this ‘supertall’ structure.

Deep rescue 27 May, 2015 When the world’s biggest tunnel boring machine broke down 120ft underground, Mammoet was called in to retrieve it.

Bridging the Hudson 27 May, 2015 The New NY Bridge, replacing the 1955 Tappan Zee Bridge, has been planned since 1999. Over more than a decade, the project was delayed while more than 150 different concepts were discussed. The project moved forward in 2011, and the first span is due for completion in 2016.

Proceed with caution 09 December, 2013 The US crane market has been through some lean times in recent years, but now thanks to a growing energy sector and a focus on value added services the US lifting industry can start looking ahead with more confidence. Zak Garner-Purkis examines the reasons behind the cautious optimism.

Jobmap 31 January, 2013 Key projects in the USA and Canada

Under-the-hook update 13 July, 2012 This month Cranes Today takes a look at rigging products developed for wide-ranging industries including light construction, oil and gas, and salvage. The Versabar Claw is designed to quickly remove sunken topsides offshore. Other companies focus on lighter loads, such as Pemco, offering a pipe safety hook. For lifting light loads without electricity, we interview Global Track on a new hook for its manual overhead crane.

US cranes get a lift 11 June, 2009 The US federal stimulus package is now being allocated by local state officials. The benefits are not immediate, but, as Robert Ebisch reports, some of the billions available should soon trickle down to crane users.

Facing facts 18 May, 2009 In the second of a series of interviews with high profile members of the industry, Manitowoc president and general manager Eric Etchart gives his take on the downcast market to Richard Howes.

Slimmer, faster, cheaper 03 April, 2009 A new containerised gantry system developed by Hydrospex for US heavy lifting firm Burkhalter lifts 1,000t loads, and can be largely assembled from the ground without a big assist crane or guy ropes. Will North reports.

Tracking towers 09 March, 2009 High profile crane accidents in New York and London have led to pressure on regulators to establish public registers of tower cranes. Earlier this month, both the UK HSE and the New York Department of Buildings announced they would require tower cranes to be registered. Will North reports.

Roof extension 11 February, 2009 Roof extensions are a handy way to gain a bit more space in crowded cities. In Chicago, they do things a little bigger. Will North reports