RUD brings RFID to chains
Chain manufacturer RUD has had a presence in Aalen, in the German region of Swabia, since 1875. The company was set up by Carl Rieger and Friedrich Dietz, and takes its name from the twomen’s surnames (Rieger und Dietz, in German). With the departure of Friedrich Dietz, the company has been owned outright by the Rieger family, who still manage the business. 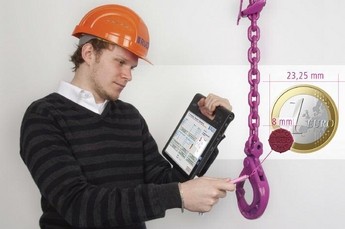 RUD now employs over 1,500 people in over 40 locations around the world. Chain, as international sales manager Eberhard Funk puts it, has always been the ‘connecting link’ between RUD’smany divisions. Today, the company makes chain based products ranging from tyre chains, to fences, to outdoors furniture, to conveyor systems. In the lifting industry, it is best known for its sling and lashing systems, and for supplying components to chain hoist manufacturers.

Around 30 years ago, the German mining industry began looking closely at accident causes. One of the conclusions from their research was that the main cause of accidents was the use of standard, cheap, or even home-made, eyebolts. Building on its expertise in developing safe products for the lifting industry, RUD worked with the mining industry to develop specialized lifting points that would remove the risks associated with the use of eyebolts.

Reinhard Smetz, divisional manager for sling and lashing systems, has been involved closely with the development of these specialized lifting products. Over the years since RUD first started working with the mining industry, he has helped develop specialist products for sectors including the mould and die, plastics, and casting industries.

Today, the company continues to innovate. Its latest new product again aims to address a vital safety issue. One of the most important ways of avoiding accidents when using rigging equipment is conducting regular inspections, discarding components that are no longer safe to use. The problem is that it can be difficult to track when components have been inspected.

RUD’s solution has been to develop a small RFID chip that can be incorporated into all its lifting points and hooks. The chip itself measures just 8mmin diameter, with a thickness of 3.25mm. The patented RUD-ID Point, with its 13,86MHz transponder is small enough to be embedded safely in a hole in the master link, hook or lashing point.

On its own, RUD says, the presence of an RFID transponder on rigging equipment is not unique. What makes the idea special, the company says, is its integration with an online tracking system. The RFIDtag can be read in a range of different ways, including the thumb drive size RUD-ID-EASY-CHECK reader, which slots easily into the USB port of a laptop or tablet computer. Other options include readers that can display the RFID tags unique, anonymous, number on an LCD display, or transmit it to a computer by wireless Bluetooth.

RUD stores all relevant customer information referring to a component or a complete chain assembly. This can be called up via the RUD web application. Using the web-based RUD application, customers can then access data related to the component or chain assembly, including the operation manual, repair hints, test certificate, BG (German workplace H&S insurer) permission, manufacturer declaration, user videos, calculation examples, test instructions and documentation.

Modulift’s customised rig was developed for lifting and assembly of the turbines at shipbuilding and offshore construction contractor Harland and Wolff’s Belfast shipyard, before transport to and installation at the Ormonde offshore wind farm in the Irish Sea. 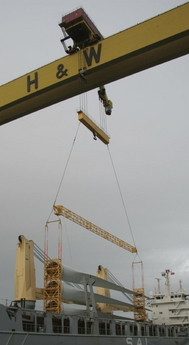 Swedish energy firm Vattenfall, which will run the wind farm, will have 30 RePower 5M turbines installed at the wind farm before the end of the year.

Harland and Wolff required a rig that could lift not only the turbine hubs, nacelles and towers, but also be able to lift three rotor blades for fitting to each turbine, in one lift. The rotor blades would need to be stored and lifted together in calibrated sets.

The giant lifting rig also needed to be lightweight to minimise any reduction of the maximum lifting capacity of the crane lifting the turbine components before and after assembly.

Modulift’s solution consisted of a 16mlong 500t capacity lifting beam with an unladen weight of 40t and a lightweight 48.5m-long spreader weighing less than 9.6t.

The lifting beam was designed to include inspection hatches and was built to ensure that these hatches would not compromise the strength of the beam.

The second component, the spreader beam, had to be easy to assemble in situ and capable of lifting the wind turbine blades, which in their set of three weigh 75t and span 61.5t.

Sue Caples, operations director and head of engineering at Modulift, says, “We spent a lot of time planning the best solution for their requirements and still needed to be able to turn this project around in record time. With the barges already on their way from Germany we had to battle against the weather to get the components finished and transported to Belfast on time to enable the project to stay on schedule, with the first barge arriving in early January.

“The components were taken by ferry to Belfast on several trucks and with Belfast experiencing its coldest winter in 16 years, snow storms threatened to delay delivery. Luckily the dedication of all parties involved enabled both the lifting beam and the lattice spreader to be delivered before Christmas, and tested and commissioned in time for its first use in early January.”