At CTT 2012, newly modernised Ivanovets truck cranes cover the 3,500m2 Namex stand. A few stands down, its competitor Kudesnik, with brands Klintsy/Galich, is launching a 110-tonner.

The Russian market prefers truckmounted cranes to other wheeled cranes because they can travel long distances with off-road chassis options, braving the dirt roads that spread throughout Russia's vast non-metropolitan regions.

Demand is so great that two new production operations started in 2007 for this type of crane, at Donetsky excavator plant and Tuymazinsky concrete truck mixers plant.

The Russian mobile crane market remains highly localised. It's been dominated since Soviet times by local industrial groups; in some cases these are former state-owned enterprises.

Neck-to-neck competition between Russian crane companies makes for a dynamic climate, with the Ivanovets brand taking 49% of the market share in terms of truck-mounted crane production and the Galich/Klintsy (Gakz and Kaz) brand taking 33% in 2010. Some crane builders produce as many as 3,000 units a year.

Russian producers design most of their cranes for Russian and CIS-made chassis, each working with multiple chassis partners, such as Kamaz, Maz, and Ural. Truck crane chassis are often maintained by separate chassis distributors.

In Russia, manufacturers don't normally refurbish truck cranes. But the option of removing and reusing a truck-mounted crane if its chassis breaks down makes it an attractive option for cost-minded buyers.

Although the Russian market continues to be dominated by 25t capacity truckmounted cranes, capacities have risen in recent years to include bigger models.

For three years, the company has been redesigning its plant in Ivanovo to produce oviform booms, similar to those used by Western manufacturers, and offering improved capacity at key points on the load chart.

Under the USSR, all Russian crane plants were united in one state-owned organisation. Ivanovskaya Marka was establised as a private business in 1993, although it inherited some plant facilities with a heritage going back to about 1955.

The Ivanovo plant is one of four plants producing heavy equipment, from tractors to cranes, owned by the Moscow-based holding Independent Association of Machinery Manufacturers (IAMM).

In the mid-2000s demand for heavy equipment abroad grew, and IAMM decided to restructure the group to better export products to the international market. Namex was created to handle sales domestically and internationally.

Namex is today the exclusive sales representative of Avtokran and Gazprom- Kran plants for Ivanovets mobile cranes and slewing bearings, Bryansk Automobile Plant for special wheel chassis and tractors, and Raskat for road rollers and compactors.

As the brand starts to internationalise, it has made steps to include internationally-recognised components, to make parts-sourcing and maintenance easier.

The company picks parts to meet customer demand. For example, Avtokran will continue producing hexagonal, as well as oviform booms. It will fabricate up to 5,000 booms per year, supplying more for export. Chistiakov says: "Ivanovets cranes are working in Syria, Egypt and Cuba. We are considering supplying our cranes to India, Nicaragua, and Venezuela in the near future."

"We have 15-25 partners with whom we are in close contact. We are looking for new partners abroad, and this process is in progress.

"Just now we are discussing creating assembly plants in the Middle East, North Africa, Latin America, Asia, India, Cuba. In principle we are ready to discuss and supply in any of these countries. We have just started relationships in Nicaragua, Venezuela, Brazil and Chile.

This is the prototype for its newest model, the KC-99713, an off-road truck-mounted crane expected to launch in six months.

"The interest in Russia in this model is great," says Kudesnik's Anton Pastukh.

Pastukh says: "The Russian market needs higher and higher capacity cranes. Our new crane lifts 110t at 2.5m, and the boom length is 54m. It has a jib and second winch. The crane superstructure is produced by Tadano Faun, and the carrier is produced by MZKT.

"The capacity of the KC-99713 truck crane makes it practical for infrastructure work, such as the massive works required for the 2012 Winter Olympics in Sochi." Pastukh says: "In Russia we will have the Olympic Games and then we will have the football World Cup in 2018. So, in total, there are 15 different stadiums and arenas being built, as well as bridges and roads.

"That is why builders will need cranes like our 110t truck-mounted crane and crawler RDK-36. The 110t crane has an offroad carrier, which means it can also work in the oil and gas sector." This off-road mobility makes it suitable for work on pipelines in northern Russian regions like the Arctic Yamal peninsula.

One of Klintsy's crawler cranes is working in Sochi, building a ski slope in Krasnaya Polyana, but markets for crawlers extend outside the country.

"We export to the CIS countries, and the largest market is Belarus. The most popular is the 36t crawler crane produced by Klintsy. It is mostly used on bridges, lifting big concrete sections," says Pastukh.

"All terrains aren't useful in Russia, we have poor roads and there is a large area of the country where there are no asphalt roads. There would be complications with the tyres. So they are only used in cities."

Kudesnik's crane plants have a long lineage, with the first Galich Crane produced 30 years ago and the first Klintsy crane produced 50 years ago. Today they continue to produce military cranes for the Ministry of Defense.

Kudesnik's distribution network comprises 71 service centres in Russia, Belarus and Ukraine, but it may one day extend into Africa, Pastukh says. "We plan to export to all the CIS countries first of all, and Egypt, Cuba, Kazakhstan. We are looking to step in the near future to Egypt."

Austrian-Russian alliance
Austria's Palfinger has focused in recent years on internationalising its sales. Its CTT stand was combined with that of newly acquired Russian crane builder Inman.

Inman was debuting its first stiff boom, the IT 80, just out of prototyping. Dmitriy Andreev, head of marketing for Palfinger in the CIS, says the company will continue to develop cranes in this range. The IT 80 is marketed in Russia by Palfinger's dealer Ural Spetz Transform Miraz.

Palfinger also showed a workman's basket and drill attachment for its most popular knuckleboom, the PK15500. Andreev says: "This kind of equipment is not new for the market but it takes a lot of work to get all the necessary documents in Russia to produce such machines due to restrictions and technical regulations applied to personnel lifting equipment.

"To sell baskets by themselves we would need to do a lot of customs paperwork, so we added the basket as a feature. We did it and we hope that we have a good market reaction.

"This particular model is the first fully legal Palfinger knuckleboom crane with a workman's basket in Russia."

The model displayed on the stand used a Kamaz off-road chassis and on-board workshop, and was on loan from an oil company using it to maintain parts of oil pumping stations.

There are few regional players selling knucklebooms in this truck-mounted crane dominated market, says Andreev. Palfinger plans to broaden its product offering in the region by developing stiff boom cranes, lifting platforms, mobile cranes and other products for Russia.

A display of wealth
Moscow is said to be home to the highest concentration of billionaires in the world. The city is no stranger to ostentatious displays of wealth. One such is the Mercury City Tower, Europe's tallest skyscraper. Manitowoc provided two Potain MR 295 H16 cranes for the project.

This ultra-tall tower, symbolic of the Russian economic boom right before the crisis, sits in a complex of skyscrapers, the Moscow International Business Center, also called the Moscow City Project.

The building is set to be 332m high and will be the tallest in Europe and Russia, taller than the Shard in London. Work started 4-5 years ago, and, with the aim of finishing this year, four cranes have been working around the clock to build up to eight floors a month.

In the early stages, the cranes lifted formwork, reinforcements, and scaffolding, and removed rubbish as concrete structural works were completed. During the second stage a Chinese subcontractor used the cranes to lift glass panels, and install cooling units.

The rapid pace of construction is partially due to the unstable financing environment for new build projects after the 2008 economic crisis. Another project using Potain cranes, the Russia tower, had to be downsized.

Sergey Neznamov, Manitowoc sales manager for Russia and the CIS, explains: "Because of the crisis in 2008, a lot of skyscraper construction was stopped. Architect Norman Foster designed the Russia Tower for Moscow City area, and one of his propositions for this tower was the 1,000m height of the building.

"We started the foundation but during the crisis it was parking for cars. In early 2012 we decided to recommence the construction, but the height of the building was reduced by 612m to 360m."

Many Russian construction companies have problems borrowing and thus appreciate financing deals organised by crane builders. Manitowoc is starting to use some financing companies, like Dutch company De Lage Landen (DLL), and may be adding another financial partner.

The first Potain cranes appeared in Moscow in 1995. In 2001 Manitowoc bought Potain. A Manitowoc subsidiary was established in Russia in 2004, with two dealers for tower cranes, Global Crane and Kramax. It popularised its Igo range of self-erectors with a road show through the country in 2006. Neznamov says, international tower crane manufacturers retain a competitive technical edge. "We
have a big gap between Russian and European cranes.

"Some years ago we decided to ship cranes for export to CIS countries from our Slovakia factory, which opened in 2008. We did not want to build a factory in Russia because it's very complicated to export from Russia. There is a lot of bureaucracy with customs, while from the European Union we can do it very easily." The winter Olympics is having a big impact on Potain as well as Russian manufacturers, and Manitowoc's dealers have a fleet of Potains scattered across different sites. Neznamov says: "Global Crane started renting activity for the Cross-Country and Biathlon Complex for the Sochi Olympics because it's big. It's more than 10 cranes."

Global Crane also sells Manitowoc's Grove boom trucks in a range tailored to the Russian market, combining the superstructure of a Grove crane with a Volvo chassis.

While self-erecting cranes were an unfamiliar concept in Russia 10 years ago, the market is beginning to appreciate their efficiency compared to boom trucks, with Russian manufacturers starting to launch their own lines, says Neznamov. "It's possible of course to construct a four or five storey building with boom trucks, but it's quite expensive. In Europe self-erecting tower cranes are used in this case, and they are less expensive and more comfortable.

"You need to use diesel for the boom truck engine. With small tower cranes like Igo, it uses electricity. That makes it cheaper."

Manitowoc also finds a market in Russia for its used towers from Europe. Strict regulations apply to all these imported cranes, Nevnamov says, and consequently Manitowoc often equips them with a 'Russian Package': weather proofing, range limiter, anti-collision and a black box.

"To install the Russian package costs a lot, so the most popular thing is to buy used cranes in Russia. When a company wants to sell a used crane in Russia that was manufactured in the EU it's not difficult to find a customer." 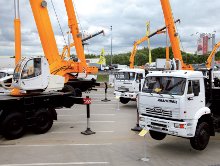 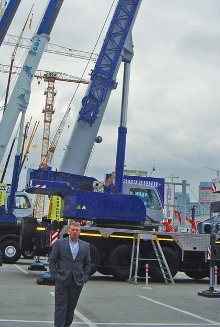