Spain projects round up

This month we review projects from Marín, Cádiz, Cabo de Peñas and Bilbao.

Marín
ALE transported a 750t yacht from its manufacturing area at a quay in Marín to the nearby slipway launching area.

The yacht was jacked up in stages to enable the gantry on which it was made to be dismantled.

Before transportation, six sets of reinforced HEB 500 double beams with transport cradles were attached to the hull of the yacht. The convoy comprised 36 axle lines of SPMT, with the move made along a 5% slope.

When the yacht was in standing position, it was jacked up to allow the SPMTs to be released, with the jacking unit under both ends of the transport beams and at the central cantilever.

The 3,092m-long bridge will connect the town of Puerto Real and the city of Cádiz, which is located on land connected to the mainland by a narrow strip.

Currently, road traffic can access Cádiz either along this strip or on the congested Carranza bridge, which opened in 1969.

The new project involved the construction of two 185m piles, and the lifting and placement of suspension cables, for which the 18t Comansa cranes with 50m jibs were used. Dragados previously used these cranes during the construction of the 250m-high Torre de Cristal skyscraper in Madrid.

Spain's Ministry of Public Works and Transport expects to open the new bridge before the end of 2015.

The lighthouse is located at the northernmost point of Asturias, and had been operating since 1852. The National Port Authority required it to be dismounted ahead of repair work to the building.

The Terex crane had a height of 33m, a radius of 34m, and lifted a load of 4t. Anne Steeb, in global marketing at Terex, said: "The Spanish market is growing a little from 2014. Our most important customers are deciding to renew their fleets from 100t up to 200t step by step first, with bigger crane capacities for next year."

Bilbao
Kobelco supplied an 80t BME800G crawler crane to a customer in the Murueta shipyard in Bilbao.

The crane is being used by a French marine contractor on board a newly-constructed vessel, for dredging in the port of Bayonne.

It is fitted with a clamshell attachment and will be handling 11t loads.

The BME800G was shipped from Kobelco's factory at Okubo, Japan directly to Barcelona, where it was then transported by trucks to the shipyard.

The BME800G is also suitable for foundation operations with diaphragm wall-bucket, and for piling when equippd with a leader and foundation table. 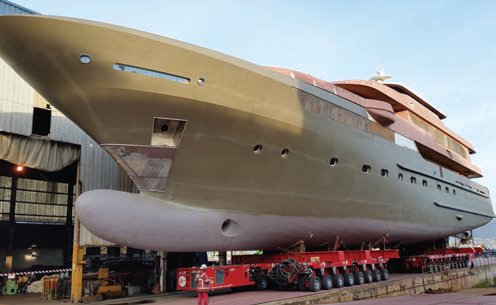 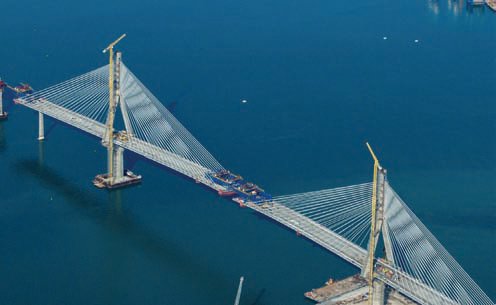 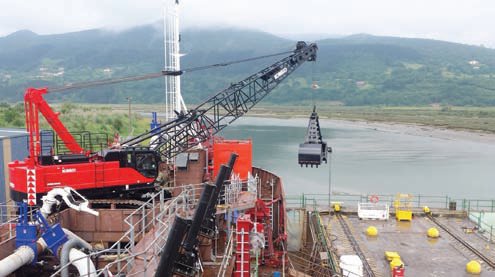