Simon Marr, managing director of the Men from Marr’s, talks to Sotiris Kanaris about designing heavy lift luffers and providing solutions to demanding projects around the world.

And yet, the demand for cranes in the city kept increasing, then expanded across Australia and in the past decades has even originated from other continents.

The first crane—with 4t maximum capacity —was built in 1926 to provide a more practical solution for installing the steel fittings that the family foundry business was delivering around the city. Innovation and problem-solving have remained the company’s main focus across the three generations of family members running it.

Today, the Men from Marr’s (Marr Contracting) is a leader in the design and delivery of heavy-lift luffing tower crane solutions. Its 75-crane strong fleet comprises nine bespoke luffing tower crane models, including the world’s largest capacity tower crane, the 330t Marr M2480D. The Marr M2480D has a standard lift capacity of 330t at 15m radius and can lift 100t at 45m radius, with around 130m of hook height and no support ties. It is fully rated to operate in wind speeds up to 20m per second.

“We work very closely with [tower crane manufacturer] Favelle Favco. We design the cranes and then they engineer and fabricate them for us. They are great to work with because they are always open to bespoke solutions and they are very flexible in the way they will modify cranes to suit our projects.

They look after the upperworks, while we design and build in-house the accessories and systems; for example travel systems, crane bases and sometimes tower systems,” Marr explains.

As to how the company’s cranes compare to others in the market, he answers: “We have the high-speed high-capacity winches on these cranes. If you look at other cranes in the market, which are often electric cranes, their winch capacity is a lot lower and their speed under load is a lot slower. In addition, our machines are versatile, we can run them with low emission diesel power packs or fully electric.”

He highlights the importance of having a wide range of capacities in the fleet, as it gives the company flexibility to address different jobs on a project efficiently.

“When a client gives us a list of cranes they want for a project, we challenge them on why they chose that particular cranage. What we often see is that clients are building their construction methodology around what cranage they think is available and what a standard crane can do. We ask them to think of how they want to approach the construction methodology and to let us fit a crane into that methodology,” says Marr.

He adds that many times clients, particularly for infrastructure projects, focus on the number of hooks on the project and ask for more hooks.

“We tell them that what they need is fewer lifts rather than more hooks. Because more hooks just adds congestion and complexity to a project.”

The company also modifies its cranes to meet the requirements of a project or to reduce downtime. For example two M2480Ds have undergone several modifications for the 1915 Cannakale Bridge in Turkey.

Some of the engineering challenges the Men from Marr’s had to take into account when preparing the solution for this project were: high wind zone, an earthquake zone, aggressive construction programme, a lot of heavy lifting and the fact that it was over the water.

“One modification was the change of winch so it could take additional rope to lift around 160t up to a height of 320m. In order to get all the rope onto that drum and to do that lift in only three falls, we had to do some redesigning, and have a different hoist drum and winch for that crane.”

The company also changed the way the crane climbs, reducing climbing time by 80%. “We turned the climbing around so instead of facing forwards, we were climbing from the back. We ran a separate winch over the back of the crane and we used that to lift the towers up and place them onto the climbing monorail. The main boom of the crane stayed balanced the whole time.”

Another way that the Men from Marr’s saved time was through the crane assembly. Originally the plan was to assemble the cranes on the base of the bridge, over the water.

But then the Marr’s team found that it was feasible to assemble the cranes on shore and use the 2,200t barge crane, which was on site, and place the cranes on the bridge. “We reduced what would have taken a month of project downtime to a four hour activity.”

Marr says this is the most challenging project the company has been involved in. Among the projects the company has provided lifting solutions for outside Australia are the 283m-high ICD Brookfield Place development and the One Za’abeel in Dubai, as well as a fully integrated waste to energy (WTE) plant in Doha, Qatar. The company’s cranes are currently performing lifts at the Hinkley Point C nuclear power station in the UK.

The UK is the country where the Men from Marr’s established its first international office. The company started promoting its offering more strongly to the international market after 2016, when the demand from the oil and gas and mining sectors in Australia slowed down.

The demand for heavy lifts in Australia has picked up again and the company has been involved in the construction of Sydney’s tallest office tower, the Circular Quay Tower, as well as Australia's largest public transport infrastructure project, the Sydney Metro. Marr says the company will also supply cranes for the construction of the metro system in Brisbane, Queensland.

The Men from Marr’s have taken a minority stake in Australian tech start-up BuildAI, which developed a cloud based AI software system that automatically reports construction progress.

BuildAI uses cameras to monitor cranes and the movement of materials and workers, and then relays that data to an AI system which crunches the numbers in realtime onto a cloud-based dashboard. Marr says: “Despite the massive technological advancements that we’ve seen in other sectors, our industry hasn’t changed much in terms of technology over the last 20 years. Where manufacturing productivity has grown by 3.6%, construction productivity growth is sitting below 1%. This is why we’re joining forces with BuildAI to bring developments in technology on-site to allow us to automatically gather and analyse real-time lifting data.”

The user will be able to see where the cranes have been used efficiently, at what time of the day, what % load capacity they are using, how much material they are moving.

“It is not only about the crane but it is also about the actual building process. It collects data in real time about how the project is actually progressing and it builds a digital twin model of the project to show you where the project sits in relation to the original plan.”

The Men from Marr’s has already installed it in some of its cranes working in Australia and in the US. “It is still early days but the data that is coming out is good. I think the system has endless potential.” 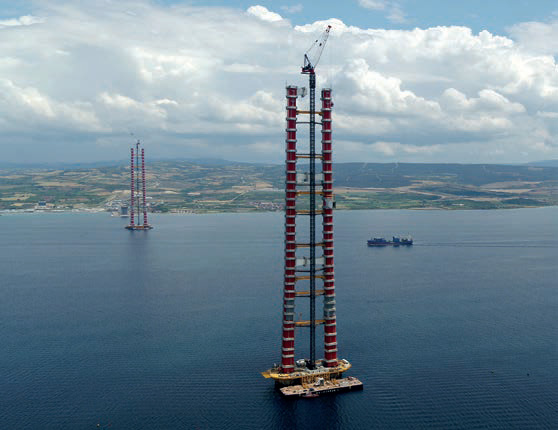 Marr's M2480D heavy lift luffing cranes working from both sides of the Dardellenes for the construction of the 1915 Canakkale Bridge in Turkey. 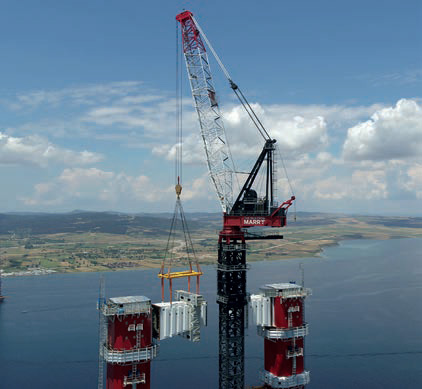 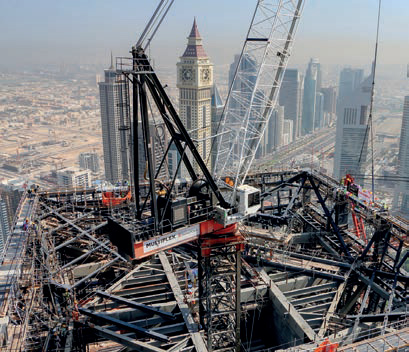