Over the decades, Kobelco has introduced products that enjoyed commercial success in many international markets. Sotiris Kanaris visits the Okubo plant, the heart of the manufacturer’s crane manufacturing.

The Okubo plant is the core plant for the production of Kobelco Construction Machinery Group’s crane products. At this facility cranes with lifting capacity of 50–500t for the domestic and international markets are produced, using both traditional skills and the latest technology.

Since 1960, when the plant opened, the manufacturer has continuously invested in upgrading and modernising it. The latest investment was the establishment of a dedicated area for counterweight painting and surface preparation last year.

“A lot of times in manufacturing the bottleneck is the painting, because you can’t go any faster, so we had to expand the painting lines.”

Apart from the assembly line, the plant has a big testing yard where the finished products undergo thorough testing before being delivered to the customers.

The cranes that leave this plant are destined for both the domestic and the international markets. Keiji Saito, general manager of Okubo factory, says the machines are designed according to Japanese, European, and US regulations.

“In Japan we have very strict road transport regulations, especially for the total transport weight. Therefore it is important to reduce this, or customers will have difficulties obtaining road permits to transport the machine,” says Susumu Hashimoto, assistant manager at Kobelco’s crane marketing group. He explains that the total transport weight is low in Japan because there are many bridges, of which some are old.

While the age of some bridges presents a challenge to Japanese crane owners, it also offers opportunities: Hashimoto says the government is planning to invest in the replacement of many bridges and this could trigger demand for cranes in the next two-to-three years. At Kobelco, they find that the current domestic demand is good, a result of construction activity for the Olympics as well as positive economic conditions in the country. Units from the manufacturer are currently being used for the construction of the Olympic village.

In Japan, crawler cranes with tower configuration are often used for the construction of high-rise apartment blocks of up to 15 storeys. The most popular Kobelco model in Japan is the 200t 7200G-2 from the Mastertech series. The manufacturer’s BM (Base Machine) series, mainly used for foundation and civil engineering jobs, is also very popular in the country.

The most popular export models are the 100t machines, CKS900 for Asia, CKE900G-2 for Europe and (110USt) CK1100G-2 for North America. “We used to sell a lot of units of the 250t crawler crane. They were mainly used for power plant construction as well as refinery and chemical plants, but at the moment the demand from these industries is low,” says Hashimoto.

The US market is Kobelco’s strongest international market. Hashimoto says it is because of the historically significant market share the company enjoyed in the country, and the good current economic situation in the US.

“Europe is very stable although our biggest market in the region, the UK, is slow. It is because of the unfavourable exchange rate and the uncertainty around Brexit, which have led to many customers delaying any purchasing decisions.

There are also many projects on hold, like HS2 and the Heathrow expansion,” Hashimoto says.

Asia’s biggest crane market, Singapore, is also down. At Kobelco they see that many customers are trying to reshape their fleets by reducing the number of cranes, creating a large supply of second hand units in the Asian market. The markets in the region where they see an increase in demand for their cranes are Indonesia and the Philippines.

Some African markets are picking up as well, like Nigeria and Mozambique. “An LNG [liquefied natural gas] plant project has been recently announced in Mozambique. A Japanese contractor is involved in a jointventure for this project.”

The most recent launch from the manufacturer for the international market (it launched the 55t class TK550G telecrawler for the Japanese market in 2018) was in 2018, when it presented new hydraulic crawler cranes with a maximum lifting capacity of 300t (330USt) for standard crane and 350t with an SHL specification.

The manufacturer says it has launched these higher lifting capacity cranes in response to the increase in weights and dimensions of construction materials and rise in building heights. When compared to Kobelco’s 250t CKE2500G-2, the load moment in the standard crane specification is 40% higher and in the standard luffing configuration it is 60% higher.

Maloney says the manufacturer is looking into enhancing its operator assistance devices as well as the Kobelco Crane Remote Observation Satellite System (KCROSS). KCROSS is standard on all G-2 Series models and is a proprietary system that allows remote monitoring of the unit from the owner’s desktop. The system can provide daily, weekly, and monthly reports that the owners can print. This allows them to look at all of the cranes data in a simple and easy-to-read format.

Kobelco pays particular attention on research and development to maintain the high quality of its products. At the Kobe Steel Group research institute, situated in the outskirts of Kobe, engineers are studying how to improve the welding process and also are looking into strengthening the structures. In terms of design there has been collaboration between the crane and excavator teams, as they have both been part of the Kobelco Construction Machinery group since 2016.

“We are trying to have more synergies to design future products by taking advantage of different engineering backgrounds,” says Hashimoto. “In addition, this year we have collaborated with the Toyohashi University of Technology (National University) to research together future technologies for cranes.”

With a long-standing reputation for the quality of its products and a strong innovation drive, Kobelco is optimistic about its future presence in the global crane market. 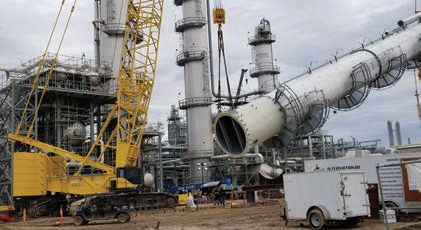 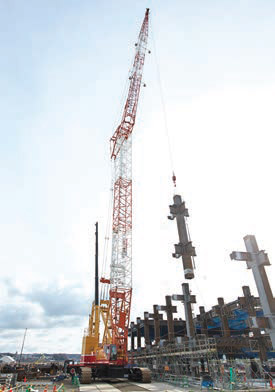