The Singaporean market has been a very important market for the Chinese tower crane and component manufacturer.

Yongmao was listed in the country in 2008 and has had an office there for sales and after sales service.

Sales marketing manager Jonas Tan says this market is currently the strongest in terms of sales in the region. Over the past few years, at Yongmao they have identified a trend towards higher capacity tower cranes in the country.

This demand is triggered by a government initiative for the use of Prefabricated Prefinished Volumetric Construction (PPVC), with the aim of improving productivity and safety at construction sites. At the sites where this method is employed, Tan says loads can reach up to 40t.

Yongmao started manufacturing larger capacity flat top and luffing tower cranes in 2014. Initially, these large capacity tower cranes were designed to the specifications of customers and used for the construction of power plants, infrastructure projects like bridges, as well as high rise buildings in China and Taiwan. In 2017, they started receiving enquires for their higher capacity cranes for residential construction in South East Asia, mainly Singapore, and since then that interest has been growing.

STT1830, STT1330 and STL1400A cranes are currently being used in Singapore for a government housing project, while another STL1400A is being used on a private one. The bestselling model in the country is the STT983, which has a maximum lifting capacity of 50t, jib length of 70m and maximum tip load of 11.5t.

Although there are some high capacity Yongmao tower cranes operating in other South East Asia countries, for example a 100t STT2200 is being used in Indonesia at a power plant project, the demand in these countries is predominantly for smaller or medium classes.

Currently, the most popular smaller capacity Yongmao models in the region are the 18t-20t STT373 flat top and the STL230 luffer. “The majority of these models are used to build with precast concrete or concrete bucket, which could weigh from 4t to 18t. These two models are popular in Malaysia,” says Tan.

Tan says the company will enhance its offering in the near future, with the introduction of new luffers between 20t-22t and flat tops between 30t and 40t.

In terms of the overall South East Asia market performance, Tan says there has been a gradual increase in demand over the past few years. He believes that part of it is due to the Chinese government’s Belt and Road initiative. There are various infrastructure, commercial, and residential projects underway in the region related to the initiative.

At Yongmao they anticipate that demand will continue to grow in the region over the next few years.

Tan is expecting more enquiries for higher capacity tower cranes from countries other than Singapore, as he believes they will start adopting the PPVC building method. 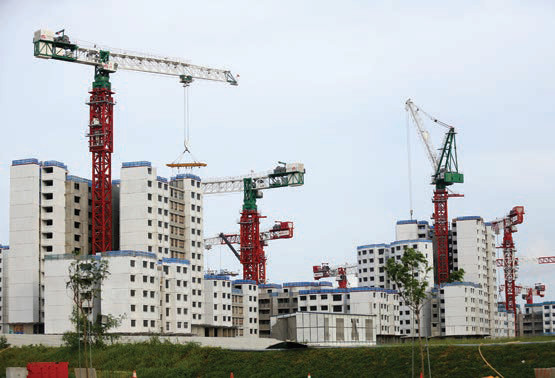