The strongest of all

The market for all terrains with capacities of 400t or higher is served by a small number of players, who continuously enhance and update their offering. Sotiris Kanaris reports.

The global demand for high capacity all terrain cranes has been stable, according to the manufacturers. However, this has not affected their drive to update their products or introduce new ones.

In June, the first unit of XCMG’s 750t XCA750 all terrain crane was handed over to a customer. The newly-launched model is specially designed for wind turbine maintenance.

XCMG says China’s cumulative installed capacity of wind power has increased by a 32% annual compound rate in the past ten years, with 150,000 onshore wind turbines installed by the end of 2019. As an effect, the demand for wind turbine maintenance has increased significantly; the manufacturer estimates that up to 5,000 units could require maintenance every year.

The XCA750 has a 92m main boom, which when fully extended can lift up to 107t. A special extension boosts the maximum lifting height to 115m, at which the crane can handle loads of up to 62t.

In its portfolio XCMG has a wide range of all terrain products, with the largest one having a capacity of 1,200t.

This model has a main boom of 60m and when fitted with its full complement of jib, it can achieve a maximum tip height of 136m.

There are significant differences between the new model and its predecessor. “The GMK6400-1 offers increased reach and comes with the new Manitowoc CCS Crane Control System. Therefore, it has the boom configurator as standard and can optionally be bought with MAXbase that allows asymmetrical outrigger positioning for improved flexibility on job sites as well as increased load charts on the main boom,” says Andreas Cremer, vice president of product management for mobile cranes at Manitowoc.

Moreover, compared to its predecessor, the GMK6400-1’s engine and transmission were updated to meet Tier 4 final/ Euromot 5 regulations.

With the hybrid drive system, MegaDrive, axles four and five are hydrostatically driven and will protect the friction clutch from wear. This model has a compact design, the carrier length is 17.5m and the main boom overhang is 1.8m.

Cremer says compactness is one of the requirements of the industry. “In general, the demand to lift heavier loads increased all over the world while at the same time, job sites are becoming more confined and constrained. One reason for this is an increasing level of urbanisation and densely built-up inner cities. So, besides high capacity, the compact design of cranes is important.”

He highlights the optional MegaWindLift feature, which is self-rigging in only 20 minutes without the need for an assist crane. “This provides outstanding support when setting up the crane on the job site and allows crane operators to get more done during a working day. In addition, load chart increases of up to 70% on the main boom and even more on the luffing jib can be realised with MegaWingLift.”

In regards to the jobs this crane is most likely to be deployed for, Cremer says: “The GMK6400-1 is likely to be used for heavy loads that can typically be found in wind power work, for the set-up of big tower cranes—especially when a long reach is needed—or for the set-up of AC units on high buildings when a combination with MegaWingLift and luffing jib makes this an easy task.”

The highest capacity all terrain crane in Manitowoc’s portfolio is the 450t GMK7550, which was introduced to the market in 2000. “Already then Manitowoc used the successful concept of a removable outrigger box (ROB). The sevenaxle GMK is a crane model that customers are requesting and is popular in North America because of its exceptional roadability in combination with its strong load charts,” says Cremer.

Liebherr’s newest model is the 700t LTM 1650-8.1 unveiled at last year’s Bauma. This new crane has large shoes to fill, as it is the successor to the hugely popular LTM 1500-8.1, of which almost 600 units have been delivered to date.

“Our goal was to design and build an eight-axle crane with minimum 50m telescopic boom within 12t axle load, with maximum lifting capacity and at the same time short set-up times. The result was the LTM 1650-8.1,” says Wolfgang Beringer, marketing and communication at Liebherr-Werk Ehingen.'

“It travels with an axle load of 12t complete with its 54m telescopic boom and the front supports. To minimise the set-up time, however, the rear supports are installed as complete support box in a single hoist and connected using quick-release couplings. The new crane is able to complete hoisting work in the 700t class or even higher with ease. It therefore has a nominal load capacity of 700t.”

As with all new developments over the last few years, Liebherr can offer the LTM 1650-8.1 with a very wide range of transport weights and axle load versions to ensure cost-effective global mobility for axle loads both above and below 12t.

In terms of the differences between the newest large Liebherr all terrains and the older ones, Beringer says: “The new models have innovations like variable support base VarioBase, variable counterweight radius VarioBallast, the Liebherr single engine system with mechanical shafts, ECOmode as well as ECOdrive.”

Liebherr’s largest all terrain, the 1,200t LTM 11200-9.1, was launched in 2007. Beringer says that this model is often used in wind projects. “There is still work in wind power, e.g. for the smaller turbines or for maintenance work.

Very often the lower sections of the towers of large wind turbines are assembled with the LTM 11200-9.1 (or LTM 1750-9.1) and then big lattice boom cranes assemble the upper sections, gondolas and wings.”

The Tadano Group also has a significant offering of high capacity all terrain cranes, comprising Tadano and Demag branded machines.

For the 400t class, Tadano offers the ATF 400G-6. This model has a 60m main boom and can be equipped with different types of extensions. One of it is a fully hydraulically telescopable and tiltable jib (HTLJ) for 78.5m reach, a unique feature that is just offered by Tadano. The ATF 400G-6 is compact; it is 17.9m long, 3m wide, 3.99m high. Tadano says this crane provides the best lifting capacities on main boom in the 400t class on six axles.

Tadano Demag has a 500t all terrain model in its range, the eight-axle AC 500-8, which has a 56m main boom. The manufacturer says it is the most compact eight-axle unit of its class, as its carrier length is only 17.1m. In 2017, this model was upgraded with new features such as the IC-1 Plus control system.

Tadano Demag is also offering the nine-axle, 700t AC 700-9. This machine has a maximum boom length of 60m. Despite the long boom, it can still travel within a 12t axle load limit with main boom attached. It is also equipped with the IC-1 Plus giving Tadano’s customers the possibility to work with slewing-angle related capacities and benefit from higher capacities especially over the outriggers compared to 360° lifting capacities.

The largest model in Demag’s all terrain range is the 1,200t AC 1000-9, which has a 100m maximum main boom length. “The AC 1000-9 is a perfect example for versatility: it can work in very different applications: petrochemical, infrastructure projects, as well as wind mills,” says Michael Klein, product marketing manager for Tadano and Demag all terrain cranes.

Versatility is one of the main customer requirements for high capacity all terrain cranes. “Requirements are a bit different depending on the markets or the regions where the customers are working. Transportability is a big topic. Therefore we have just implemented a travel configuration with 60t GVW for our AC 500-8 and AC 700-9. With this travel configuration our customer might get their travel permits easier and quicker. Rigging times are also very important,” he adds.

Klein sees a shift in the market demand towards models with capacities between 400t and 600t. “We have a solid offering and long-term experience with large all terrain crane. Paired with the feedback from our customers and the trends we see, we are thinking about a next generation of large all terrain cranes.

“It is too early to talk about specific products but we are confident that we will release further information about new products before the end of the year.”

The LTM 1450-8.1 is capable of travelling on public roads with a 12t axle load including its 85m telescopic boom, all its outriggers and the complete hoist winch.

Once at the wind farm, the crane installed cables for bracing concrete towers at a hook height of 100m.

With a 21m fixed boom attached to the telescopic boom, which had been extended to a length of 79.5m, the crane was able to complete the work using just 34t of ballast. It was able to hoist a load of 7t to a hook height of 100m with a radius of 24m.

“VarioBase enabled us to increase the lifting capacity by around 15% for this load case,” said managing director Björn Sommer.

The task was completed in just two days, after which the new 450t crane set off to tackle its next job.

For even greater flexibility and mobility, Sommer purchased the LTM 1450-8.1 with a completely removable telescopic boom and a feature enabling individual telescopic sections to be detached quickly.

This enables the crane’s gross weight and axle loads to be reduced for travelling on public roads. 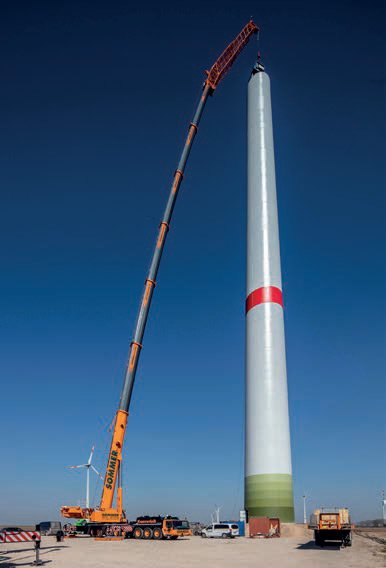 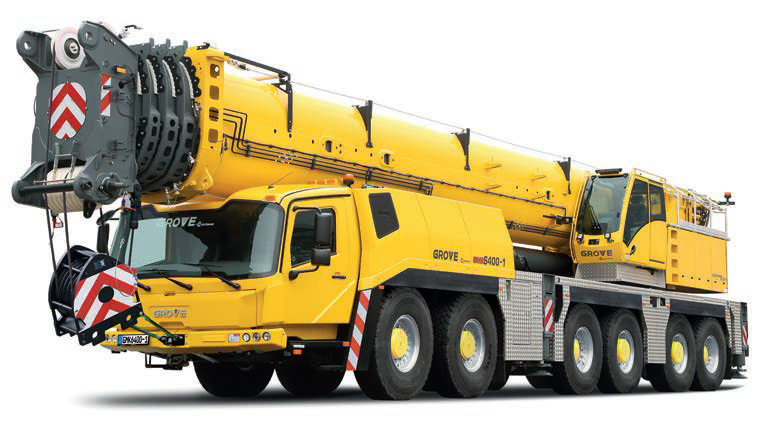 Integrated Logistics used a Demag AC 1000 and an AC 500 to carry out a tandem lift for the construction of a bridge in Kuwait City. The two cranes lifted a 200t steel girder beam to support the bridge span in tandem. 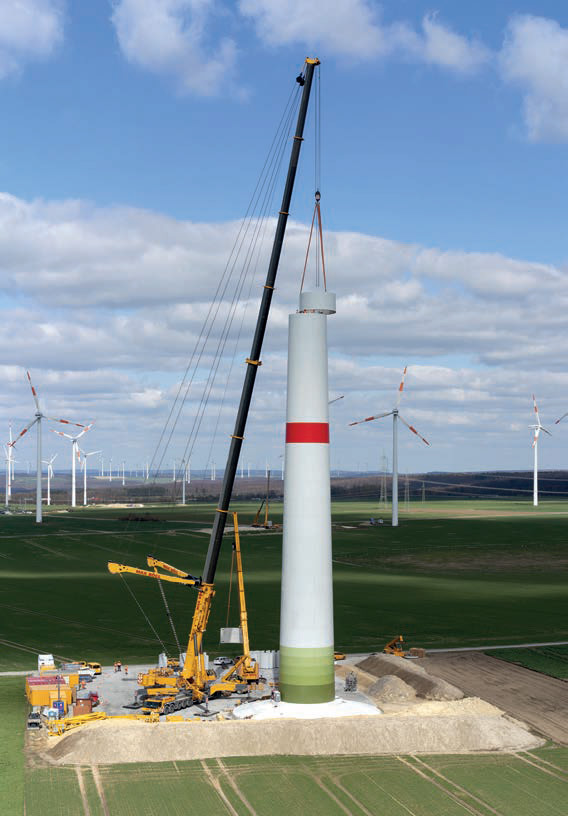 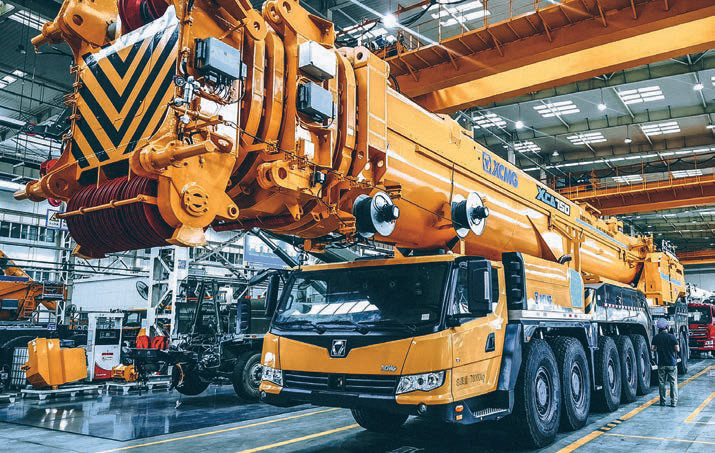 XCMG’s XCA750 was designed to meet the needs of wind turbine maintenance work.