In December, Will North visited Manitowoc’s Shady Grove, Pennsylvania plant, and learned how the company is working to deliver new cranes in a rapid development cycle.

At the last ConExpo, Manitowoc CEO Barry Pennypacker had been in the job for a little over a year. He’d joined the company in the long wake of the global financial crisis, and, after investors had pushed for it to spin off its food service business.

Now, leading a company focused for the first time solely on cranes—historically, Manitowoc had also had a ship building division— Pennypacker described ‘The Manitowoc Way’ during his product launch presentation. Key to this would be a fast development cycle that would see new cranes launched in as little as six months.

That claim raised quite a few eyebrows among the journalists and crane buyers at the presentation. But now, with 60 products launched across the company’s ranges since the split, it doesn’t look so unreasonable.

Walking around the factory with Mike Reed, value stream director for mobile hydraulic cranes, I got a chance to see how the company’s development and production processes help deliver new products in a timely fashion.

The plant itself is vast: a true campus, Reed points out, encompassing all of the company’s US mobile crane production, since the company ceased production at its namesake hometown in Wisconsin. Reed’s role, along with two other value stream directors— Andy Konkle, who is in charge of crawlers, and Justin Pilgrim, who handles boom trucks—is to be the single point of accountability for production in each range, from sales administration through to the final delivery of cranes to customers. This management structure is itself part of the process of ensuring easy communication and faster resolution of issues.

We started where crane building starts, with the delivery of steel plate. New equipment here, for plate blasting, cutting, and machining, reduces set up time significantly, easing materials flow into the factory. In the same space as these machining tools, A dedicated cell for National Crane boom trucks burn and machine all of the pieces needed for boom welding, ordering them for onward flow through the factory.

Lean production didn’t start at Manitowoc with Pennypacker’s appointment, but it is an area of expertise for him and has been a key focus of the company over recent years. Downtime—not just when equipment is unavailable, but when it is sitting unused—is tracked for each machine in the plant. In line with the productivity concepts first developed as part of the famous Toyota Production System, the company performs regular ‘kaizens’, (literally, ‘change for the better’), actions to study a process, identify inefficiencies, and find better solutions.

We saw one such improvement in the next station we visited, where overhead cranes have been replaced by manipulators with magnetic attachments. While these don’t cover as much of the production space as an overhead crane, they allow operators to work fast, without the need to wait for an available crane, and without needing to set up clamps for lifting. A simple set of handlebar controls allow the operator to engage magnets, and ‘float’ metal components across their workspace.

As well as improving its internal processes, Manitowoc has rethought its supply chain. Previously, plate details for large weldments would be supplied from third party suppliers. Now, the company has taken this in house. “Putting us in charge of our own destiny,” Reed says. To achieve this, the company recently invested in new burning and machining centres, and robots to produce rough terrain frames and outrigger boxes.

The company now aims for 80% of each crane to be welded robotically. Reed says, “We design to allow for this. As part of the drawing review, during the new product development process, if we can’t achieve this, we’ll change the design. We design for manufacturability.” The use of robots, and their rapid set up, is made easier by careful, modular, design techniques. For example, the new Grove TMS500-2 truck crane uses the same boom and upper as the established Grove RT530 rough terrain crane. On the carrier, the truck crane shares components with others in the line. As well as easing production, this, again, helps with rapid development.

This modular approach also eases fabrication. Another clever idea in the welding process is the use of laser projection. As operators set up parts for the finish weld operation, a laser marks the part’s outline. This ensures each part is positioned correctly, before moving along the line, where a mistake will delay production. Similarly, on the truck-mounted crane line, static milling machines have been replaced by mobile machines. So, rather than components needing to be moved to the machine, the machine comes to the part, cutting set-up time further.

Moving on from the large weldments hall, we enter the rough terrain and crawler crane assembly hall. This space originally had two lines for rough terrains, large and small. With the launch of the Manitowoc MLC 100-1, which Reed says is the only 100USt crawler produced in the country, these lines were combined to make space for a dedicated line for the new machines, with RTs going through 12 assembly stages. Another line handles other crawlers, in the 165-300USt capacity class, and two static stations allow for the assembly of larger crawlers, up to 716USt: these machines are too big to justify separate assembly stations on a line.

From the assembly hall, we step away from production to product development, and the plant’s PVC, or product verification centre. Cranes Today visited this facility back in 2012, shortly after it had launched. It remains an important, and impressive, element in the company’s approach to crane design. Here, every element of a crane can be tested, in conditions that carefully mimic real-world use. For example, new software like that used in Manitowoc’s CCS (crane control system) is set up with the sensors and controls used in a finished crane, allowing engineers to see how it will work in the field. Manitowoc’s materials expert, Ding Qian, has developed a battery of tests for third party suppliers, to ensure they meet the company’s exacting requirements. And a range of machines allow finished components to be rapidly heated and cooled, shaken, or exposed to corrosion, effectively speeding up all the strains they will face over years of use. At the top of the PVC, a control room looks out over the plant’s testing grounds, where cranes are set up with automated controls and run through their paces.

Returning from the PVC to the production line, we enter the last stage in our visit, crawler component fabrication. This space had previously been used for cylinder fabrication. As part of the same sort of evaluation of core competencies that saw the company move large weldment fabrication in house, Manitowoc decided to source cylinders from expert third parties. This made room to move all of the equipment needed to cut and weld crawler lattice booms to Shady Grove, centralising mobile crane production.

Making space for the machines for this stage, heavy that they are, and moving them from Wisconsin and Passo Fundo, Brazil, was not, Reed says, as big a challenge as one might think: some new foundations needed to be dug, but the space was there. The real challenge, over around a year, was recruiting and training expert welders able to handle the complicated threedimensional structures of crawler lattice sections.

On our way back from the factory, we pass the simple building where Shady Grove’s coincidentally named founder John Grove first set up shop. The decades of growth since offer evidence of the commitment of his successors, in management, design, and on the factory floor, to crane development and delivery. The real test though comes at events like ConExpo, and on job sites around the world, where crane owners choose equipment and put it to work. 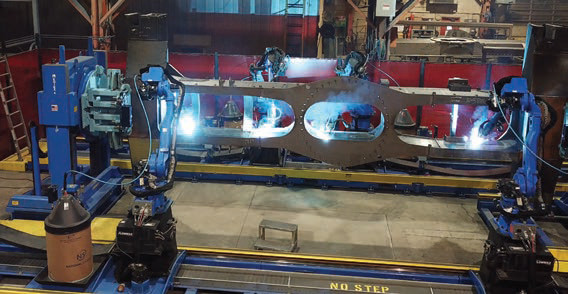