Arguably the most challenging thing to do during a period of market disruption or downturn is to look forward.

The Covid-19 crisis is unparalleled in recent history. Parallels of similar magnitude and breadth of impact simply don’t exist. For governments, the challenge is to balance the sometimes conflicting issues of the health of the people with the health of the economy. We’ve already seen ‘false-starts’ where governments felt that it was safe to open sectors of their economies that had been ‘locked- down’ only to see outbreaks returning in a ‘second wave’. Meanwhile, having been told to stay at home, the public has been reluctant to return to previously- normal behaviour.

For the most part, with a few notable exceptions, public confidence in political leaders has further declined as denials have been followed by policy reversals. At the time of writing, the total number of cases has exceeded 22 million with over 780,000 deaths. Frighteningly, there is still a long list of countries whose leaders are part of the ‘denial’ movement. This includes Belarus, Brazil, Cambodia, Indonesia, Mexico, North Korea, Tanzania, Turkmenistan and Zimbabwe. By now most people realise that this is not some myth or political conspiracy but that it is changing the way of life of large swathes of the population for the foreseeable future. The economic impact is only now beginning to show. It is widely believed that, in part due to the slow reaction of the British government, the UK will be amongst the worst affected of all European countries. After a modest 2.2% first quarter decline in GDP, the UK economy suffered a fall of 20.4% in Q2—the biggest quarterly fall in recorded history. The long-term impact on the UK economy doesn’t bear thinking about.

The vast majority of countries have adopted WHO guidelines of social distancing. Now that it’s clear, to most people, that this isn’t a ‘two-minute wonder’ it seems prudent to consider the impacts that are specifically relevant to the crane industry.

Around the world, industry bodies and trade associations have been pro-active in making available detailed guidelines on- line and generally on a free-of- charge basis.

Full compliance with regulations is an enormous challenge for contractors, hirers, dealers/distributors and manufacturers. Almost all of the guidelines add cost and extend job times and in economically- challenging times, and asking for more money and more time is never easy. In addition, making the case that washing, testing (and re-testing) and inspecting machinery, and reorganising sites is not something that most companies are equipped to handle. At a time when economic conditions are forcing companies to reduced headcount, these regulations require the addition of training, communications, testing, inspection and cleaning personnel.

The implications for crane users in emerging countries can be even more challenging than for users in developed countries where fleets are newer, and safety and operating standards are generally higher. For companies with fleets of older and second-hand cranes, the economic challenges of adhering to cleaning, disinfecting and operating guidelines are very significant.

Although not immediately apparent, the Covid-19 safety guidelines have an impact on the types of cranes and machinery employed. While the entire lists of recommendations made around the world by various accredited regulatory bodies and trade bodies must be adhered to, in our estimation there are four areas that have particularly acute impact on the crane industry.

The first of these, we’d suggest is that safety on a job site or work space like a service shop or manufacturing plant can be significantly improved by limiting the number of personnel involved, which has a direct relationship with limiting person- to-person contact. Secondly, safety is enhanced as the number of separate pieces and parts that need to be assembled, transported, stored, inventories, recorded, re-handled is limited.

Thirdly, as always, time is money and in a Covid-19 environment cash is king. The cost and time needed for cleaning and disinfecting machinery, pieces and parts increases as the number and variety of such pieces and parts increases. Finally, in almost all circumstances, limiting the number of personnel involved in any task should save time and cost. Almost all agencies issuing Covid-19 guidelines recommend limiting to a minimum the numbers of people involved in activities. This includes meetings including training and induction meetings. Most recommend that as far as possible physical meetings should be held outdoors and, where possible and practical, on-line meetings replace physical meetings. Further, the quality and quantity of such digital meetings to be substantially enhanced.

From the point of view of crane users, crane buyers, crane sellers and crane renters, there are implications that favour certain types of cranes. This proposition is based upon the concept that some cranes more easily complement Covid-19 safety guidelines. In this respect we recommend that all involved comply with all their locally- mandated requirements.

Over time the number of mobile cranes equipped with a single operators cab has increased. Of course larger-sized road-legal wheel-mounted mobile cranes, typically of over 50t capacity feature two operators cabs—one for the crane and the other for the vehicle. Obviously all rough terrain cranes and City-type all terrain cranes as well as telescopic boom crawler cranes feature single operators cabs that combine controls of the crane and propel functions. Most regulations and Covid-19 guidelines recommend that the perator remain within the cab as much as possible.

For many crane users this is a challenge since in many cases crane drivers are expected to double as riggers, which means time jumping in and out of the cab as well as often working on rigging and reeving work with colleagues. While changing such practices can involve significant procedural changes and can add cost and time, it’s clear that in most circumstances confining and limiting ‘contact’ between colleagues, should enhance Covid-related safety.

The issue of outrigger floats bears some consideration. For many years smaller-sized mobile cranes including mini crawler cranes, small rough terrains and pick-and-carry cranes have been equipped with relatively small outrigger floats and, for the main part, these remain attached to the outrigger jacks. In many cases, these are enhanced by larger- sized floats to offer reduced ground bearing pressure.

However, precluding the ground pressure argument, where practical having ‘permanently’ installed floats that do not require regular removal and re-handling, has the benefit of minimising handling and consequent cleaning work.

In recent years, pioneered largely by the Japanese manufacturers, power-luffing and power telescoping jibs have developed in the range of applications and capabilities as well as efficiencies. These attachments, apart from their flexible performance capabilities, offer reductions in the need for rigging personnel and reduced contamination possibilities.

In addition, typically these jibs remain permanently installed and rigged in-situ on the side of the boom rather than being designed to be disconnected. They require less human intervention in terms of rigging and reeving since in many cases, on cranes equipped with twin hoist barrels, the ball remains reeved. This favours certain brands and models of City cranes, rough terrain cranes and all terrain cranes.

Cranes that travel independently to and from a job site, as well as around a job site without the need for low loader trailers, require a lower number of personnel involved in loading, unloading and rigging. By avoiding the need for trucks and trailers, less machinery and personnel are involved, thus reducing contamination possibilities. This favours most varieties of telescopic boom mobile cranes that are road- legal and that do not need their counterweights, crawler side- frames, attachments, lattice booms and jibs to be separately transported on trucks and re- handled and assembled at the job site.

The more compact and manoeuvrable a mobile crane, the more easily it can negotiate a crowded job site, requiring less site reorganisation, signage and one-way systems. This favours mobile cranes with the smallest overall dimensions, all-wheel steer, crab steer and (in the case of crawler cranes) pivot steer. Obviously all rough terrain cranes and most two and three-axle all terrain and city cranes feature 4x4 or 6x6 wheel steer and crab steer, which in an environment where one-way systems and minimum space utilisation are key have become essential features.

As standard, almost all knuckle boom loaders are equipped with hooks attached directly to the tip of booms and jibs. By eliminating a wire rope winch, wire rope, and multi-sheave hook block, piece parts are reduced; rigging and reeving time and personnel can also be reduced. In turn, these therefore reduce the potential for contamination. Obviously there are limitations to the application of such fixed hooks, including below-grade working and others.

Developments in tower cranes that enhance their flexibility and performance spectrum include trolley-jibs that can ride up and down jibs at quite steep angles to further expand application.

In several European markets as well as in a growing number of markets further afield, the benefits of the truck-mounted self-erecting tower cranes are being realised. Although not so closely aligned with Covid-19 guideline benefits, these flexible cranes, designed for urban building environment can offer significant savings of space and time over all terrain cranes. Any saving of time and space tends to minimise Covid-related contamination potential. The more self-contained varieties of truck crane and boom truck with less de- mountable counterweights, permanently-assembled fly jibs and permanently-installed outrigger floats, require less re- handling and assembly at job sites and therefore less exposure to potential of contamination. Larger-sized knuckle booms, generally having hooks permanently attached to the jib, power-luffing fly jibs, generally fixed outrigger floats as well as minimal counterweighting, have benefits over some telescopic boom truck-mounted cranes. They involve fewer separate pieces and parts requiring on-site assembly and separate transportation, and less rigging. This potentially leads to less exposure to contamination as well as lesser cleaning and disinfection work.

Telehandlers generally benefit over mobile cranes in that they transport their loads on a freight pallet carried on their fork carriages rather than suspended by a form of slings from a hook block. Generally this involves less rigging and therefore less associated personnel compared to mobile cranes and consequently less potential exposure to Covid-19.

Cost impacts: What changes and impacts to expect

Crane servicing: The handling and re-handling of tools and parts will be subject to stricter protocols, social distancing, disinfecting, etc.

Lifting and re-handling work: Again, increased social distancing protocols; cleansing of parts and pieces; more protocols limiting the re-use of ropes, slings, hooks, tools. When loading and unloading drivers should, where possible, remain in their cabs adding cost and time. Site reorganisation may add cost and take time. Telehandlers may be preferred to small mobile cranes since pallet handling may avoid or limit human contact with loads and eliminate slinging of loads.

Small, compact mobile cranes with 4x4 wheel and crab steer may be preferred because of their ability to access confined job sites without the need to handle/manhandle items. All terrains may be preferred to RTs since they generally do not require low- loader transportation and all the associated set-up and manhandling.

Telecrawlers may be preferred to lattice crawler cranes since their main booms can be erected by telescoping rather than a lattice boom which must be separately hauled on a low-boy and manually positioned, pinned together and raised. 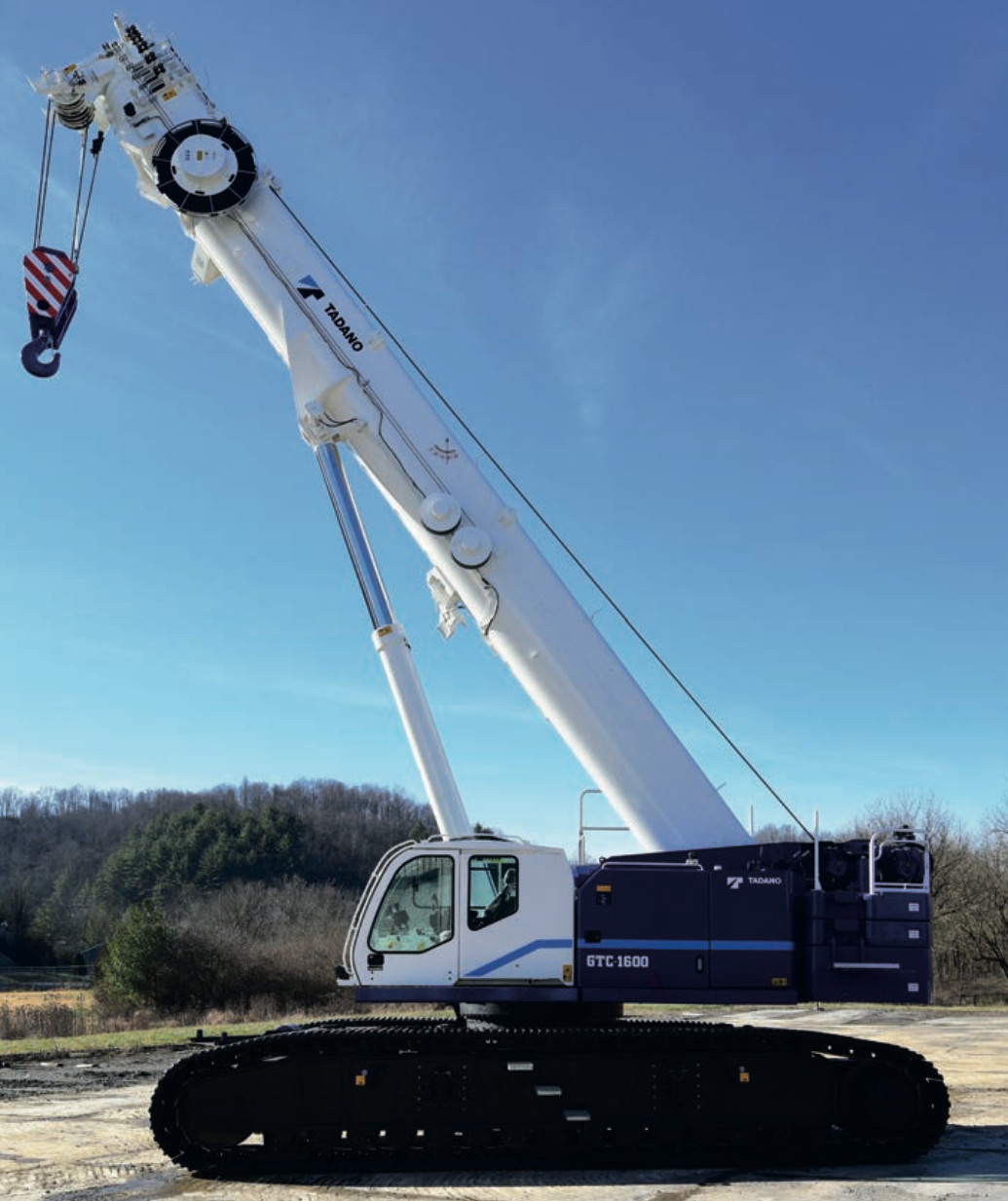 Telecrawlers, RTs and City-type all terrains feature single operators cabs that combine controls of the crane and propel functions. Most regulations and Covid-19 guidelines recommend that the operator remains within the cab as much as possible. In the picture is the Tadano GTC-1600 telecrawler. 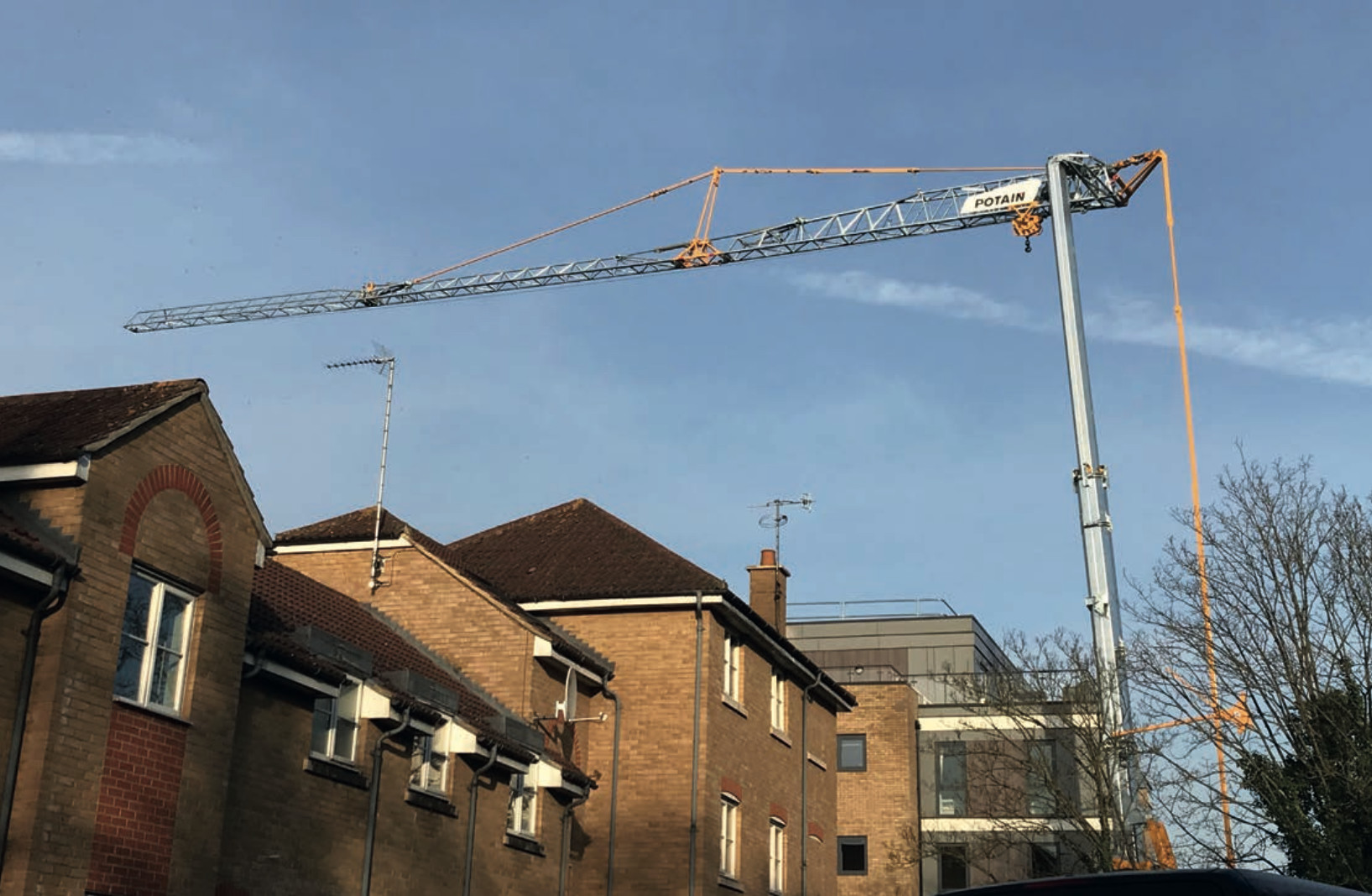 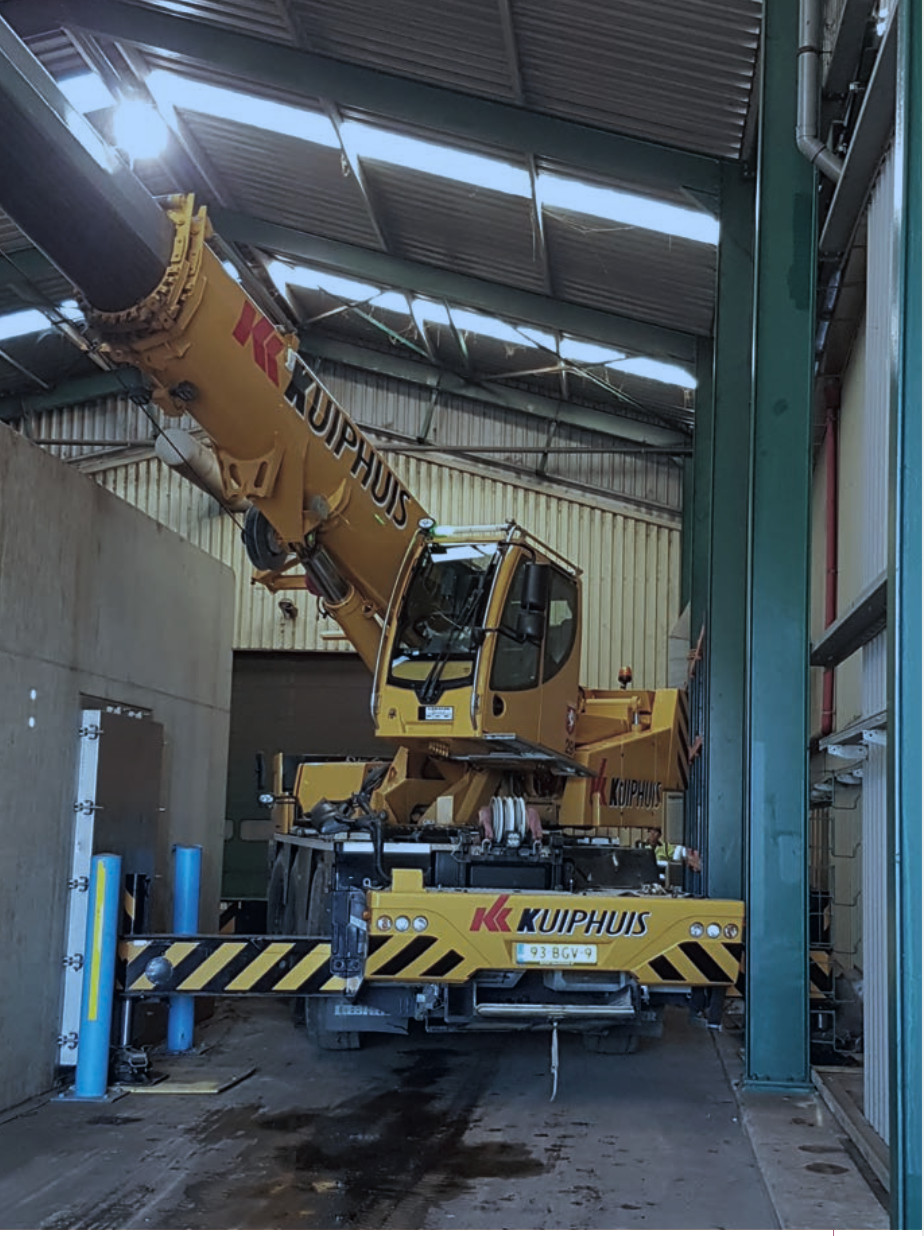 Most two and three-axle all terrain and city cranes feature 4x4 or 6x6 wheel steer and crab steer, which in an environment where one-way systems and minimum space utilisation are key, have become essential features. In the picture: Dutch company Kuiphuis Kraanverhuur BV using a Liebherr LTC 1050-3.1 in a confined space.