David Janssen, product director at Uperio, answered the question as to whether large self-erectors can compete with small tower cranes.

“We often assume that self-erecting cranes cannot compete with tower cranes because they are small and often perceived as not having: the largest hook heights, jib lengths, maximum load and the biggest power.”

Janssen said bigger self-erectors offer a lot of possibilities and depending on the jobsite they can compete with tower cranes.

He compared technical data of the two crane types and identified overlapping. Firstly he looked at the class and maximum loads: “Self-erecting cranes are in the class of 10tm up to 135tm, while a tower crane classes mostly start at 50tm and reach 1000tm and more. The overlap will be the region of 50tm-135tm. If we do the same for the maximum loads we see the self-erecting canes can lift from 1t-12t, whereas tower crane 12t to 80t or more. The overlap will be from 3t to 12t.”

Janssen then proceeded with a comparison of the hook heights, with self-erectors able to reach 60m with luffing jib, and tower cranes start from 25m and go up to 120m (with anchor systems can reach 200m hook heights). “Based on jib length, the overlap will be between 25m and 60m; in terms of hoisting power it is between 10kW and 24kW. ”

Why use self-erecting cranes instead of tower cranes in case of equal technical requirements such as hook height, jib length and maximum load? “The three decisive factors are: project duration, accessibility and erection space,” Janssen said.

He explained that project duration is important, as there should be at least a break-even between erection cost and rental price. Giving the examples of short duration projects for general construction (those lasting less than six months), maintenance at industrial sites, renovation works and shipyard jobs, he pointed out that self-erectors would be a more cost-effective choice.

Looking at accessibility, the transport and logistics to, from and on the jobsite, he highlighted the self-erectors’ comparative advantage.

“ You need less trucks and less workload to organise the logistics. In terms of transportation, there are less problems with closing roads. For long distance journeys, transport can be easily done through the use of high speed axles.” He added that a self-erector featuring a propelled system with steering devices make it more suitable for sites with rough terrain.

Self-erectors have a much shorter erection time and require less personnel (one or two people) for the erection in comparison to tower cranes. On the topic of erection, Janssen talked about the greater flexibility offered by self-erectors which is important for sites with limited erection space and obstacles: “You can erect a self-erector between buildings as well as in the proximity of other buildings and construction sites. It can also be used for dismantling above a building and you can lift it using a mobile crane to less accessible spaces on site.”

“Thanks to special jib configurations, which are more dynamic and movable it is possible to avoid obstacles and have an extra degree of freedom; think about folding jibs, luffing jibs and telescopic jibs. This will give you a lot of possibilities and improvements in erection space. Changing jib length and configuration during in-use conditions will give different advantages, such as flexibility and increased load chart.”

Janssen then said self-erectors are on the same technical and safety level as tower cranes as they are also designed according to the new EN 14439.

Smart technology systems are being incorporated in self-erectors. Arcomet system with remote trouble shooting and data logging can create a lot of added value for the crane driver, service companies and also the crane companies. “The bigger self-erecting crane can also be equipped with a cabin and we will have the possibility to install anti-collision and zoning systems.” 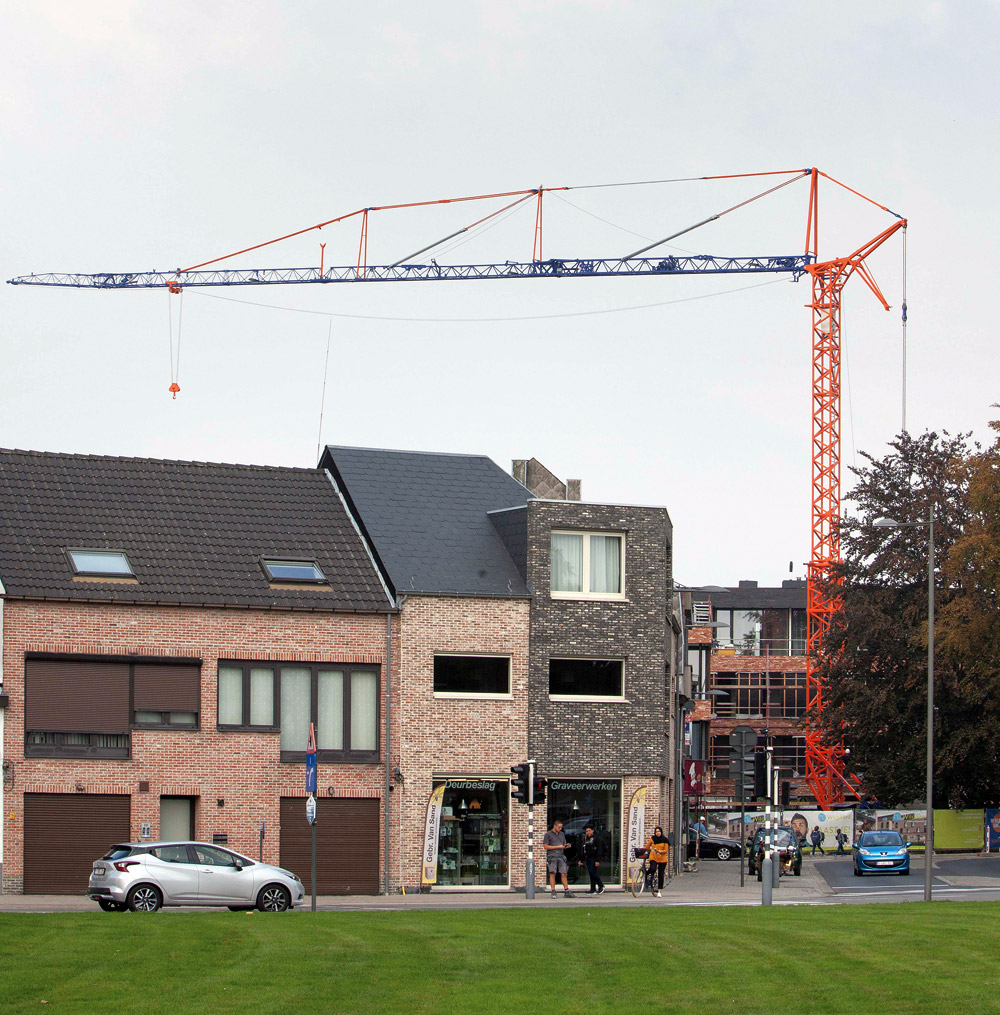