The USA has been one of the worst hit countries by the coronavirus pandemic globally, which has inevitably affected construction activity with delays in projects and downtime. In addition, the sector faced the uncertainty that accompanies a presidential election.

However, in a market this big, the demand for crane lifts never stops. Over the past year, there have been numerous projects— some more challenging than others—that required the help of mobile cranes of various types and capacities.

Stevenson Crane Service (SCS) used a Liebherr 500USt all terrain crane to provide the lifting capabilities for the Robert Parker Coffin Road Bridge project in Long Grove, Illinois. Built in 1906, the bridge over Buffalo Creek is listed on the National Register of Historic Places and was damaged in a traffic accident.

Workers from SCS, Alliance Contractors and Carmichael Construction had to lift the 40,000lb (18t) bridge off its foundation and set it temporarily on a flatbed truck while they conducted repairs to the concrete support structures and performed other necessary painting work.

“This was such a great project to be a part of,” said Curt Slipke, vice president, sales at SCS. “I’m not sure many companies get the chance to lift more than 114 years of history—that was a great experience. Our hope is the bridge will continue to serve Long Grove for another 100 years.”

With the bridge returned to its normal position, workers completed the project by installing a new wooden cover. A structural steel skeleton was also installed to provide additional protection.

Triad Engineering & Contracting used the Manitowoc MLC100-1 lattice-boom crawler crane with 110USt capacity on the London Road Relief Sewer project, situated on the east side of Cleveland, Ohio. Operating continuously over two shifts a day, the machine notched up 2,500 hours of operation within its first 12 months.

The London Road Relief Sewer project forms part of the Northeast Ohio Regional Sewer District utility, formed of a three-pronged network of relief sewer tunnels, leading down to a drainage structure that connects to a nearby water treatment plant. Much of the work for the crane involved removing excavated material from the tunnel, transported via an underground rail system.

The MLC100-1, which can be equipped with up to 200ft (61m) of main boom and has a 60ft fixed jib attachment, removed each rail car of excavated material and once emptied, the crane replaced the rail cars back down the 60ft shaft so they could be used for the next load, cycling through 50 to 60 cars per shift.

The lattice crawler crane was chosen for the lifting and placing of 850 pieces of concrete doubletees, tilt wall panels, columns and architectural forms. The 348 Series 2 lifted 60ft (18m) long, pre-stressed concrete double-tee beams weighing up to 60,000lbs from four pick points with two 20ft long cables attached to the main block, connected with 10t capacity ring clutches. The heaviest lifts for the job were concrete coping eyebrow sections that weigh 64,200lbs rigged. Those sections were hoisted at a 68ft radius at a 72° boom angle.

“Erection for the structure has been determined to be 18 different lifts or sequences. We are building from the east end, and going west,” explained Tom Johnson, superintendent for Davis Erecting.

Davis Erecting has a long history with Link-Belt Cranes, particularly their 300USt lattice crawler cranes. Its newest 348 Series 2 makes the fifth such unit to add to their fleet, which covers a territory covering much of the south-eastern United States.

The lift plan specified a crane capable of lifting a 12,600lb HVAC unit at a radius of 278ft. This called for one of Bigge’s Liebherr crawler cranes, an LR 1300 with 105ft of main boom and 233ft of luffing jib.

A base for the crane was designed to ensure firm support throughout the lifting process and comprised an underlay of plastic sheeting and a layer of base rock compacted with a steamroller to ensure the crane sat level. Timber crane mats and steel plates were employed to evenly distribute ground bearing pressure.

Assembly of the boom, jib, and counterweight required the assistance of a Link-Belt HTC 8675 Series II truck crane. Crews worked continuously over a 12 hour day, returning a second day for the last few remaining picks. The rig-out process then began and the crane and pad were removed from the site.

A Bocker AHK 36 trailer crane was used for the restoration of the Peck Ledge Lighthouse, off the coast of Norwalk in Connecticut. The AHK 36 was loaded onto a barge and taken to the lighthouse.

On site, Bocker US crane dealer Innovativ Hoisting used the crane for the assembly of steel frames, delivery of material and removal of old material. The crane’s adjustable outriggers create a compact footprint offering maximum space on the barge and its long reach and hoisting capacity—offering extension lengths of up to 36m and lifts loads up to 2,400kg (5,290lbs)—made the maintenance work extremely safe and efficient.

The trailer crane was further equipped with a Bocker Intelligent Computer Based Safety (BICS) control system in conjunction with the radio remote control enables easy operation and safety during all work processes. The BICS control system includes an automatic erection control with auto-levelling function of the outriggers and ensures a sensitive, precise and low-vibration operation. Maximum work range and maximum reach are automatically verified depending on the outrigger position and the attached load. The selectable turn and lift angle restriction also helps the operator remain within the available work space.

Corman Kokosing Construction in Maryland supplied a new 120USt Link-Belt 120|RT rough terrain crane for a $35m improvement project at the interchange of Interstate 64 and Airport Drive near Richmond.

The project involved removing two on-ramps of a cloverleaf interchange in order to add better access and egress, add an additional traffic lane in each direction, and add clearance height for freight traffic.

The 120|RT was used to drive 50ft-long PZ-27 steel sheets and 14in (35.56 cm) H-pile for the construction of new overpass bridges. A rigged vibratory hammer weighing 6,000lbs was equipped with vibratory dampeners to drive steel sheeting. The working area for the 120|RT was limited to the median between two existing bridges of Interstate 64.

To drive H-pile, the operator hoisted a 120ft-long lead and a diesel hammer weighing 28,000lbs combined, working at a 36ft radius and 66° boom angle when driving pile. Ten plum H-pile were required at the abutments and 18 H-pile in the median for Phase 1, set 54in apart.

The Cope Center in Nanakuli on the island of O’ahu, Hawaii, opened in summer 2020 and features a large multipurpose space that can be opened up to the outdoors. The outdoor facade features copper sculptures of two life-size humpback whales.

Prometheus Construction of Kapolei, Hawaii donated the time taken to weld and lift the copper sections together and place on the new community center. Once welded together on-site, the largest copper whale measured 45ft in length and weighed 3,000lbs.

“The lifting and placing of the whales on the wall of the Cope Center was a tricky operation because the landscaping and sidewalks were already installed, requiring the Link-Belt 75RT to lift from over an 80ft radius,” said Cliff Tillotson, vice president of Prometheus Construction. 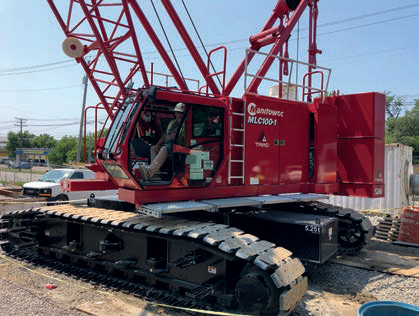 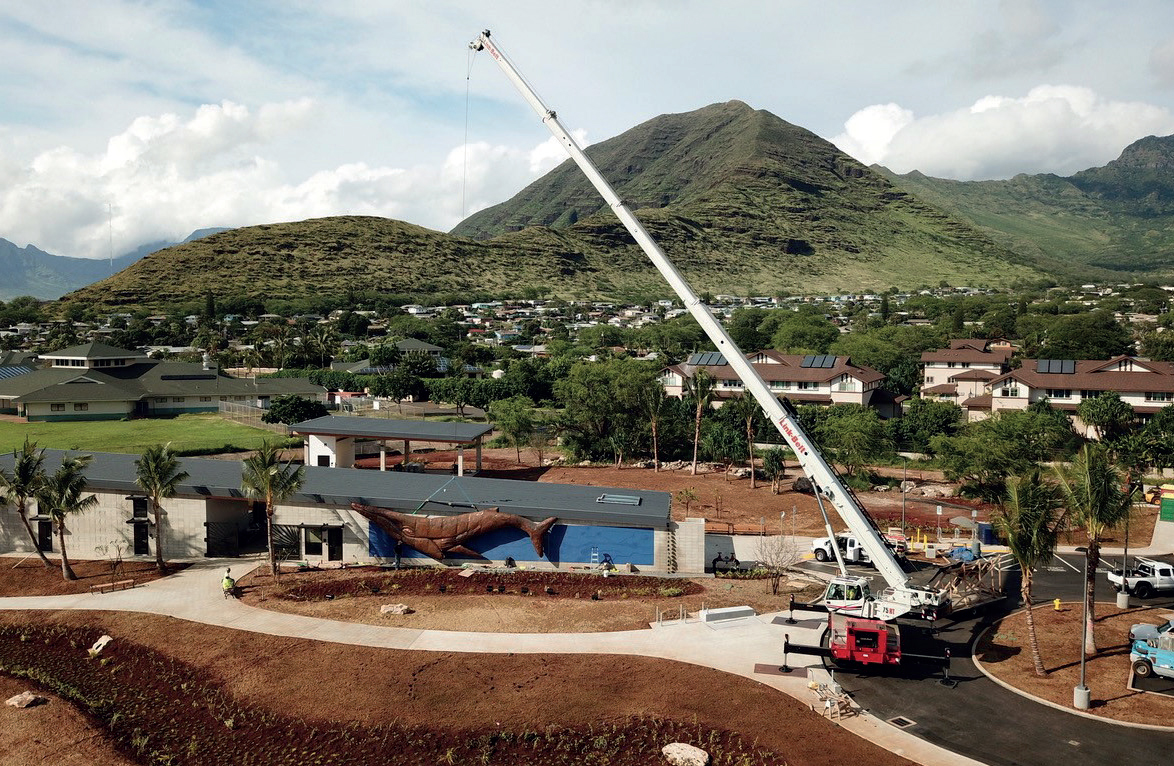 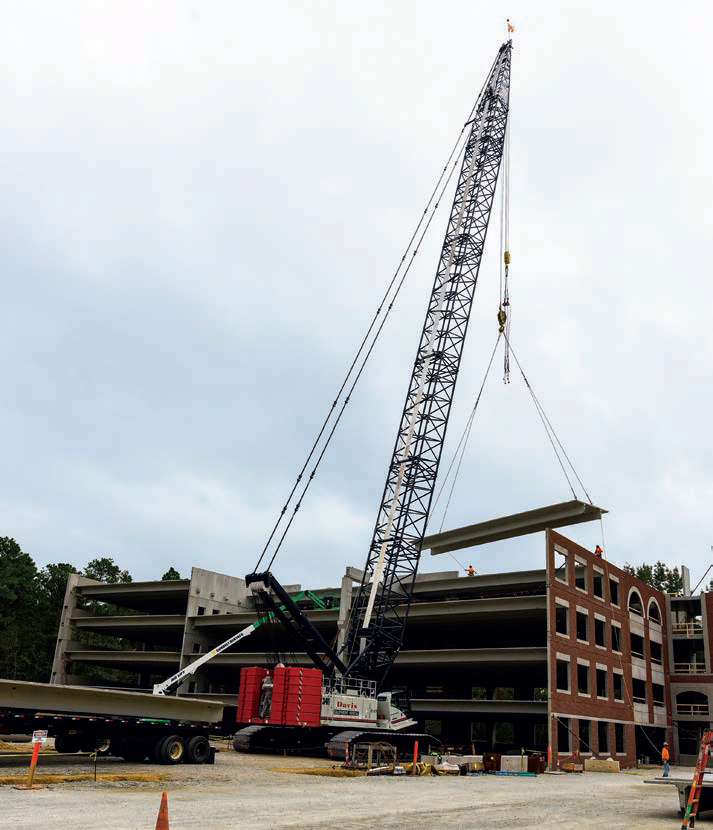 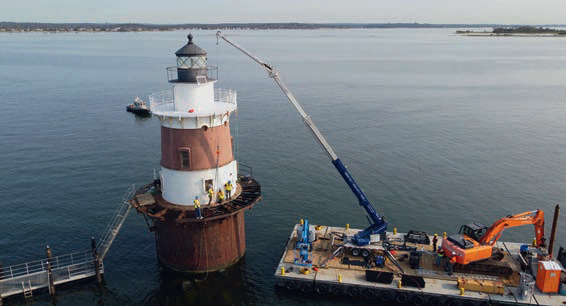 A Böcker AHK 36 trailer crane was used for the restoration of the Peck Ledge Lighthouse, off the coast of Norwalk in Connecticut.