A van might not be, at first glance, the most exciting bit of kit on display at a show like Bauma. However, the one on display on Wolffkran's stand in many ways epitomises the company's strategy: manufacturing, selling or hiring, and then thoroughly supporting tower cranes.

The van on show was one of hundreds bought by the company, all fitted out in the same way, drawing on modern lean manufacturing techniques, to ensure service staff and riggers have the right tools to hand, where they expect them, wherever they are working.

Bought just before the end of 2018, this had been built three years prior by a Russian crane company. Now, Wolff is using it to build components and will, Schiefer says, begin manufacturing cranes there for the local market if and when demand in the country returns.

Asked about the company's strategy with the plant, Schiefer made clear this would be no 'B' line: if and when the company does begin manufacturing cranes there, these will be to the same designs as those built in Germany, with the same quality assurance and technology. It would not, either, replace the German plant, but complement it.

With a growing presence in the US, and a new subsidiary in France (announced at Intermat last year) the company is increasing its global business.

It has a very visible presence in London, and Schiefer says that any downturn associated with Brexit and the UK's dysfunctional political system has failed to materialise: a surprise to him, as much as to anyone.

The company also has seen good business in Germany, Austria, and Switzerland; the US and Dubai, Schiefer says, are doing 'great'; and, he says, he expects to see Saudi Arabia bounce back.

The newest crane on the show was the 133 B. This 125tm hydraulic luffer fits into the range, between the previous 100 B and the larger 166 B.

In addition, both versions offer the option of having a singlefall hook block, which makes it possible to increase the peak load capacity by a further 250kg.

The Wolff 133 B is fitted with a 25m basic jib that can be extended in 5m increments up to a maximum length of 45m. Thanks to the modular Wolff tower system, the Wolff 133 B can be built up to a freestanding tower height of 95m. 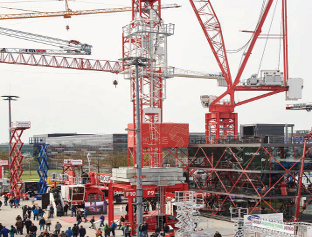 From service vans, to the new 133B and the giant 1250B, Wolffkran showed the full range of its production, sales, rental, and support offering.