Crane vessels are getting stronger and sturdier to enable marine construction in more turbulent waters. Marine contractors A2Sea of Denmark and Scaldis of Belgium discuss how they are making offshore cranes more durable.

When Scaldis launched Rambiz in 1996 it was among the heaviest lifting non-revolving crane vessels in the world, with two lattice-boom mast cranes that could tandem lift 3,300t, and maximum lifting heights of 90m.

Rambiz's heavy design is set to get stronger with the new crane vessel, Rambiz 4000. Its 2,000t cranes can tandem lift 4,000t, making it the one of the strongest non-revolving crane vessels worldwide upon completion in Q2 2014.

During the last 15 years Scaldis has seen a demand for more lifting capacity and other technical requirements.

Marc Voorhuis, general manager of Scaldis, says: "The new crane vessel is engineered such that it can withstand higher dynamic forces. The whole crane concept is built around a 'higher wave' to overcome. The engineering of both cranes, the connections to the ship as well as the forces in the hull are all dimensioned on a significant wave height of 1.5m."

Aside from changes to the ship engineering making it a self-propelled ship with a DP II feature, a major difference when compared to the previous Rambiz, is that the cranes can be skidded on the deck.

Voorhuis says: "The skidding cranes will have a few advantages. First of all the deck space can be increased by moving one crane into the aft position. The second advantage is that loads can be transported on the deck (e.g. girder) when both cranes are skidded backwards. The lifting characteristics of the Rambiz 4000 in the backwards position are identical to the front position."

Gerben Roks is product manager for the crane's manufacturer, Huisman Equipment. He explains how the design deals with the higher dynamic loading caused by higher wave conditions.

"It involves more steel throughout the crane. Basically the steel plates are thicker but you also find, back in the hoist itself, that everything is bigger. Overall it's a vessel with more lifting capacity," he says. Thanks to the stronger construction, the cranes on the Rambiz II also have a longer design life than those on its predecessor, Rambiz I, says Roks.

"The previous vessel, the Rambiz I, was purpose designed for one job, the installation of a bridge and so it initially had a very short design life. Now the new vessel is designed for a design life of 25 years, taking into account the number of lifts per year in FEM calculations."

The 90m-lift-height boom of the Rambiz 4000 is no longer split up in individual sections, but constructed as one integral lattice structure, which Scaldis says creates a robust crane mast and reduces crane maintenance.

Sharing the renewable energy installation market, A2Sea is an offshore wind turbine transport and installation firm owned by Dong Energy and Siemens. Its fleet of five jack-up vessels is a driving force behind installation of 60% of the worlds wind farms.

The firm recently announced that it reached the production stage with one of its two new jack up vessels, one named Sea Installer and the other as yet unnamed.

Both will feature the next generation of engineering firm GustoMSC's crane-around the leg crane, with the cranes being built both for design life and also for speed.

The new cranes on Sea Installer and its new sister ship will have 800t and 900t lifting capacity respectively. Hans Schneider, chief operating officer of A2Sea explains that the design of the new crane-around- the-leg has allowed improvement cranes' life cycles.

"Most offshore cranes are built to make relatively few autonomous lifts in their life time but this crane is built for doing hundreds of lifts each year and that makes a big difference," says Schneider.

"If you look at large offshore cranes in general they're built for oil and gas doing relatively few lifts per year, but this one is engineered to work for 24 hours a day, 365 days per year.

"The innovation is basically that this is one of the first cranes really tailored to do turbine work. When you look into speed and durability then this crane outmatches most cranes on the market."

A2Sea led the way in wind turbine installation a decade ago when it became the first to put a 100t Terex wind turbine crawler boom on a vessel, a technique that other firms have replicated.

Schneider says: "The big difference is that you save on power transformation, when you go from electric to hydraulic or hydraulic to electric you lose power. So we have removed the gearboxes, with diesel-electrical energy going directly to the winches. It's a more efficient crane and you also save a lot of parts making it more maintenance efficient."

Even with design developments increasing capacity, the offshore crane market remains split between the lighter and higher-speed turbine installers and the ships that can handle heavy foundations.

Both of A2Sea's new jack-ups are ideally suited for turbine work, says Schneider.

"There are cranes where they focus on handling foundation. Our primary drivers are the turbines, but if you really want to do only foundation installation you need to go up to 1,500t.

Keeping this in mind from an engineering perspective, it's necessary to choose which market to design the cranes for, he says.

"It's difficult to construct a crane that does both because when you do turbines you want to have high speed and that is a contradiction to high lifting capacity.

Despite these continuing constraints, contractors are trying to merge the division of labour between the cranes that can handle foundations and those that can handle turbines.

As for the Rambiz4000, it can work installing jackets and topsides for the renewable industry, both tidal and wind turbines, as well as for and oil and gas. It can work in civil construction, deconstruction and heavy lift salvage as well.

Due to the relatively small draft of the new vessel, the Rambiz 4000 is capable of operating in shallow draft areas.

A2Sea's vessels are also engineered to float in shallow waters, allowing lifting at the docks of ports, reducing dependency on land cranes for dockside work.

Schneider says the Sea Installer is the first jack-up vessel of its kind that can work while it is floating, so it can load turbines in harbours where the seabed can't handle the weight of a jack-up.

"The advantage is the flexibility you have if you can lift in some harbors where the sea bed is so weak that you can't push into the soil."

The next step in offshore crane design, marine contractors note, is that in the future building vessels for construction in deeper waters will be a challenge. 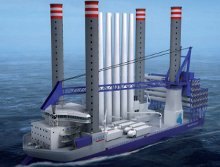