High winds pose a significant threat to all cranes. This month, Rhian Owen considers the risk to tower cranes, finds out how manufacturers design them to minimize risk, and asks what users should do to prepare for high winds. Next month, we look at the risks for crawler cranes.

This spring, a tower crane was damaged in Greenwich, London, by high winds. Also in the UK, in late 2013 and early 2014 three tower crane collapses occurred in London, including one in which the jib of a crane collapsed onto the roof of the Government's Cabinet Office in Whitehall. Although no one was injured and the crane's jib remained within the building's roof area, the building had to be evacuated.

If luffing jib cranes are left out of service with the slew brake engaged and/or the jib parked at too small a radius, there is a possibility the crane may not be able to weathervane freely in high winds, potentially result in very high loadings being placed on the crane with the consequential collapse of the jib or the whole crane.

HSE used this alert to remind those who operate tower cranes that when left unattended in the out-of service condition, luffing jib cranes must be in free slew with the jib at a safe out-of-service radius.

Generally, tower crane are designed to withstand a maximum 'out of service' wind speed of up to 100 mph. However, in order to do so a tower crane must be prepared properly, and weathervane.

"When a crane is not in use, it has to be placed into the out of service condition specified by the crane manufacturer. This is generally a 'free slewing' or 'weathervaning' condition. The crane is free to slew in wind, just as a flag," explains Thorsten Hesselbein, head of tower crane solutions, Liebherr.

"Tower crane planning must take into consideration that all tower cranes, during all phases of the construction progress, can weathervane when out of service.

There are several reasons for a crane not to weathervane; first and foremost is the operator simply not initiating it, next would be electrical or mechanical issues, and most serious - a problem with the slew bearing. "There are many examples of crane accidents where the luffing jibs have been left too steep or the slew has been left blocked when the crane was out of service," adds Hesselbein.

The Battersea tower crane accident in 2006 - in which an employee and member of the public were killed when a tower crane collapsed in high winds - occurred when failed slew ring bolts were replaced and the crane was put back into service without an investigation into what had caused them to fail. It turned out that the wrong counterweight had been installed for the back mast fitted to the crane, causing it to be back heavy, not only putting additional stress on the slew ring bolts, but also causing the bolts to be torqued with the crane unknowingly out of balance, leading to them being either under or over torqued. Two months later the bolts failed again, but this time they all failed and the top of the crane parted company with its tower.

Tower cranes are less prone to blowing over than what one would think by looking at them - so long as operators abide by the manufacturer's instructions and use common sense. Hesselbein says that a tower crane is a temporary structure that poses resistance to wind "like a flag, or a tree, or building". Hesselbein adds: "This resistance is measured as a force acting on all exposed parts of the crane like the tower, slew platform, jib and counter jib."

Hesselbein notes that every tower crane is designed and configured to stand safely under a specified maximum storm gust wind condition: "The EN13001 describes the necessary load combinations on a tower crane, which have to be combined and proven to guarantee the stability of the crane. The DIN15019:1979 has always considered the stability proof with storm from front. The FEM1.001 Book 6 from 1987 is old and should not be used any more as storm from front is not considered here. If the maximum permitted wind gust for the specific crane configuration is exceeded, then the stability of the crane will be compromised. This can result in a damage to the tower crane or collapse with all related collateral damage to persons and material.

This must be avoided." "If the wind speed on site is greater than that considered for the tower crane planned to be used, the user has to contact the crane manufacturer for recalculation and modification of the tower crane configuration to be apt for the specific wind conditions on site. The corresponding foundation loadings have to be calculated too."

The effect of wind on cranes and their loads is not to be taken lightly and it must not be overlooked when carrying out the risk assessment. The risk assessment should be carried out by the appointed person and identify the hazards and risks associated with the lifting operation. "The job site wind assessment is one of the essential things to know, in order to choose the appropriate equipment," says Francesco Valente, steel structure design and calculation manager, Terex.

Wind tunnel testing has been utilised since the early twentieth century. Engineers and designers today, although equipped with state of the art computers, still rely on the testing of models to verify computer data and determine baseline performance.

For crane owners, it is important to be aware that if the wind speed doubles, wind pressure increases by a factor of four times. This means a small increase of wind speed can have significant effect on the safety of the tower crane.

Valente says: "By means of these simulations the behavior of the crane is studied and some time it is also possible to put in evidence phenomena that are unpredictable, such as continuous turning or the crane stuck and pointing against the wind direction. Unfortunately, the cost of these simulations is still high and its use is not common."

Valente says that "high winds mean high loads on the cranes". He says that high winds not only affect safety but also crane use: "For example, loss of stability, structural failure, difficulty to handle the load and difficulty in positioning the load."

Wind forces are also particularly important when considering tower cranes as they are generally erected for periods of months on construction sites and must therefore withstand any wind that may blow during this time.

Other measures should be taken so tower cranes do not succumb to high winds. The effective wind zone - areas with similar probabilities of wind speeds - for each tower crane location must be checked. "Normally, wind speeds are higher near to a coast as opposed to inside land. In the northern UK the wind speeds are much higher than in the south area around London. For example, Ireland is wind zone D, whereas London area is wind zone C. At the moment we have such zonings for European countries only. Outside of the European union and associated countries there are different national rules or no rules for wind speeds," says Peter Hegenbart, technical support, Wolffkran.

However, the crane user is responsible for the clarification and specification of the correct wind zone and recurrence interval for a tower crane. Exposed locations such as mountain tops, natural forms such as valleys, and local particularities such as channels caused by buildings or other anomalies, may call for the use of other wind zones.

The effect of wind forces on tower cranes during erection and, in particular, climbing operations should also not be overlooked as any change in wind strength or direction can alter the balance of the crane top significantly with a consequent effect on crane stability.

"During climbing, or climbing down, operations where lower wind speeds are specified by the crane manufacturer, the user should check the official weather reports to select an appropriate 'good' weather period for erection, climbing and disassembly operations," says Hesselbein.

Weather forecasts have improved exponentially and it is now easier than ever to monitor the weather. For example, late last year the UK's Met Office announced the first phase of its new supercomputer upgrade project is now live - a major step towards its aim of producing more detailed and accurate global weather forecasts.

Its aim is to enable tower crane operators to identify weather windows to plan lifts with confidence, and so companies can provide the best possible health and safety for staff while lifting.

It serves as an inherent reminder that crane operators should take forecasted weather alerts seriously and be prepared for worst case scenarios. 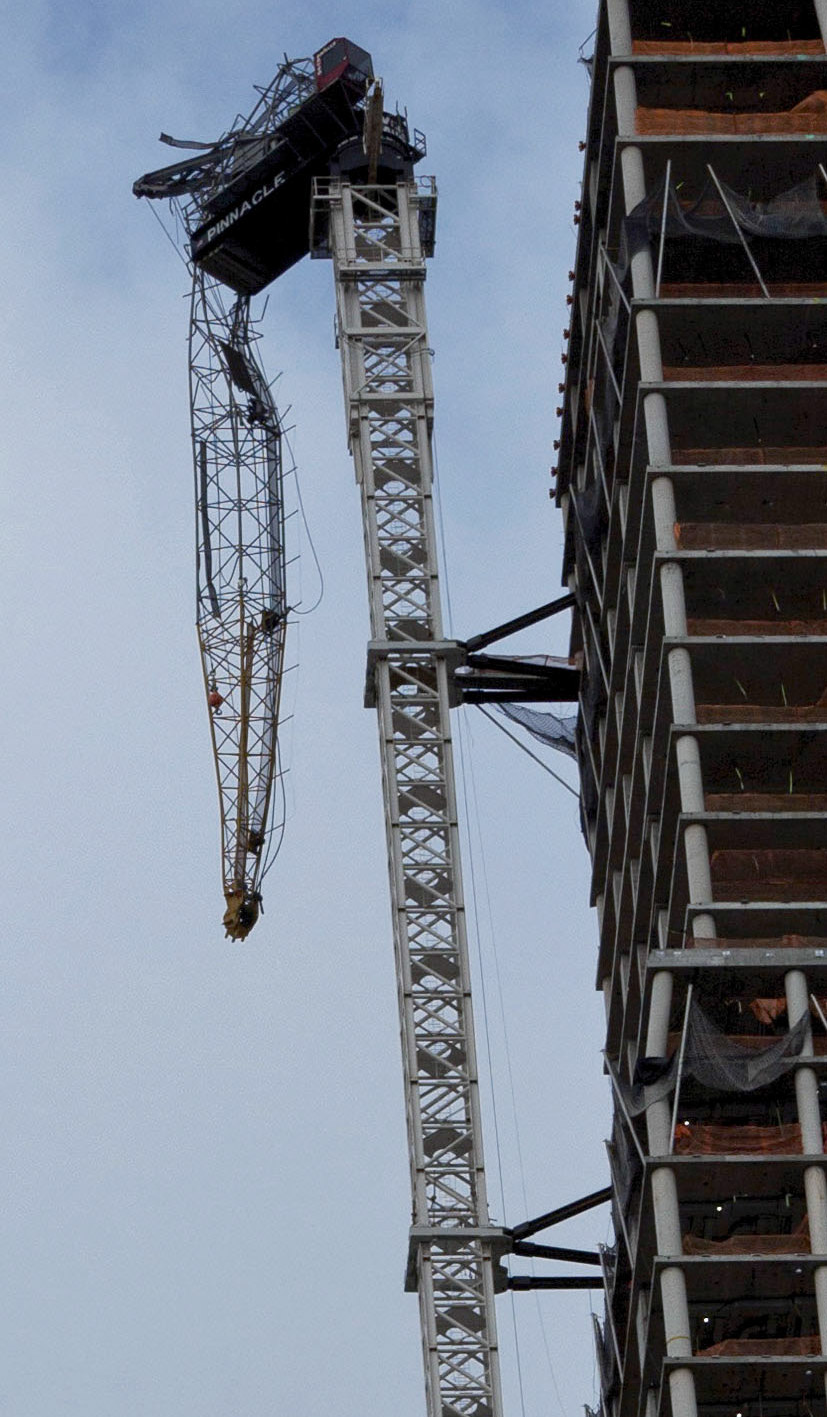 Hurricane Sandy left this crane dangling over Manhattan, also in 2013 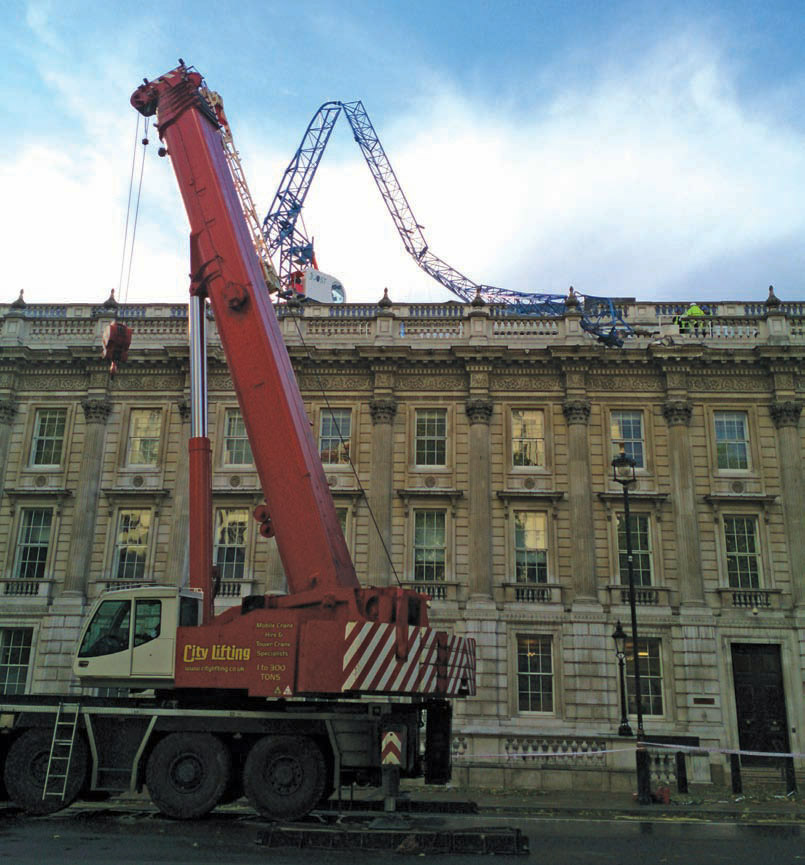 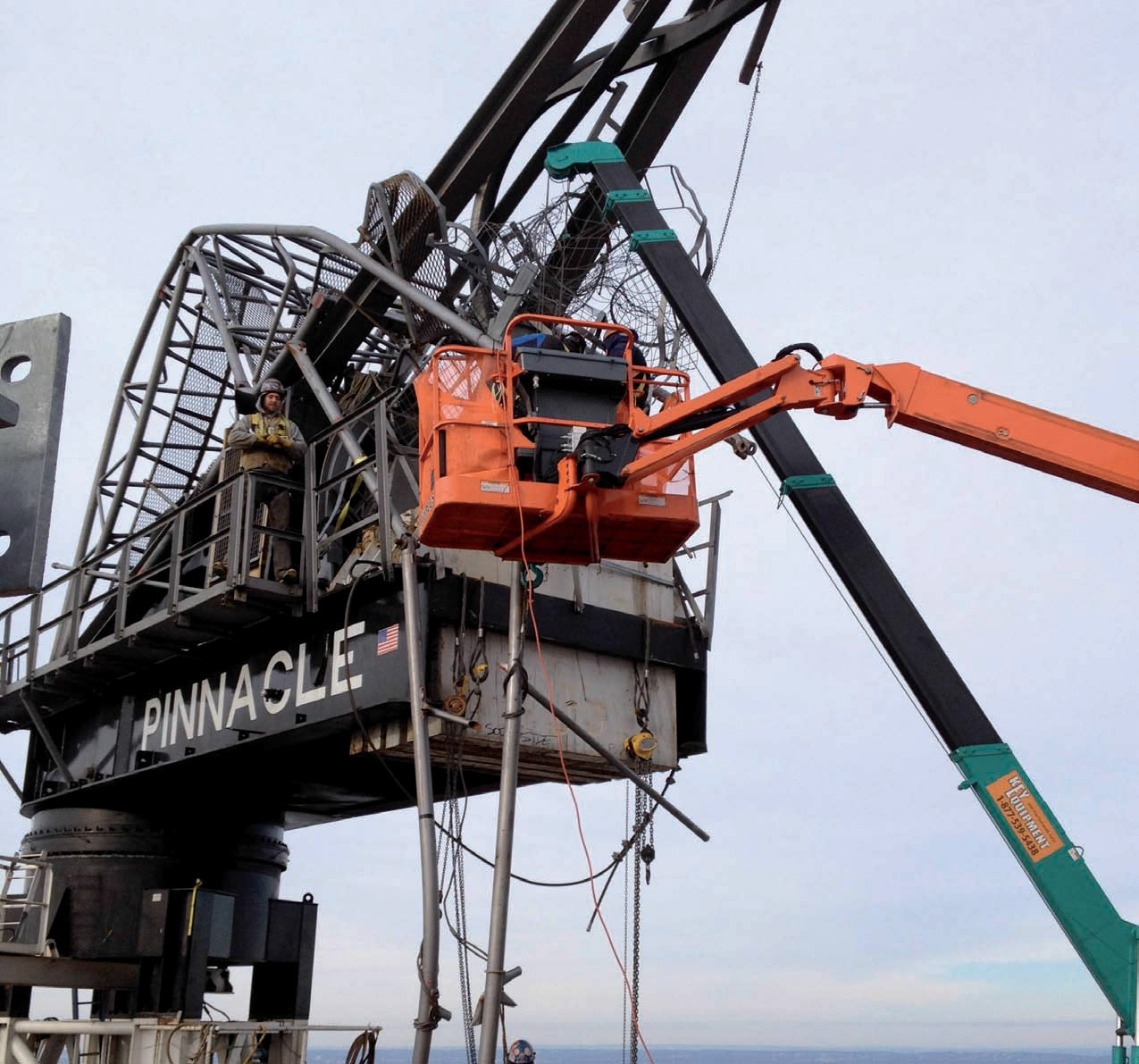 Recovering the crane after Hurricane Sandy 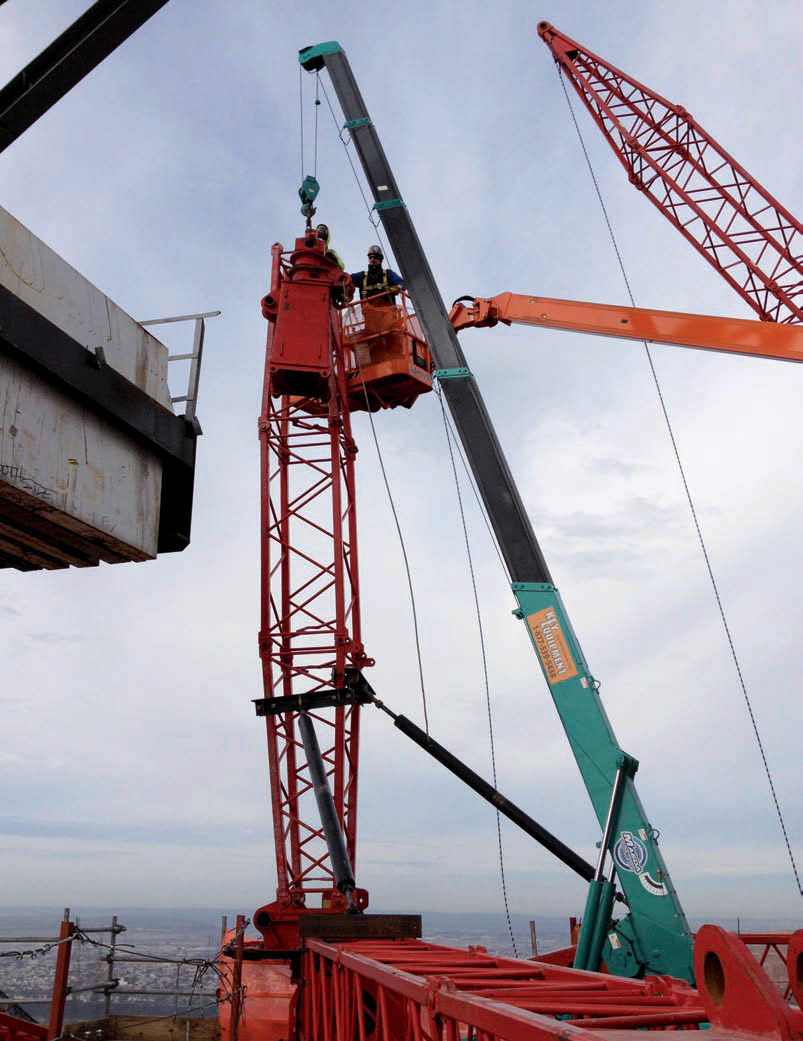 Installing a derrick for the post-Sandy recovery 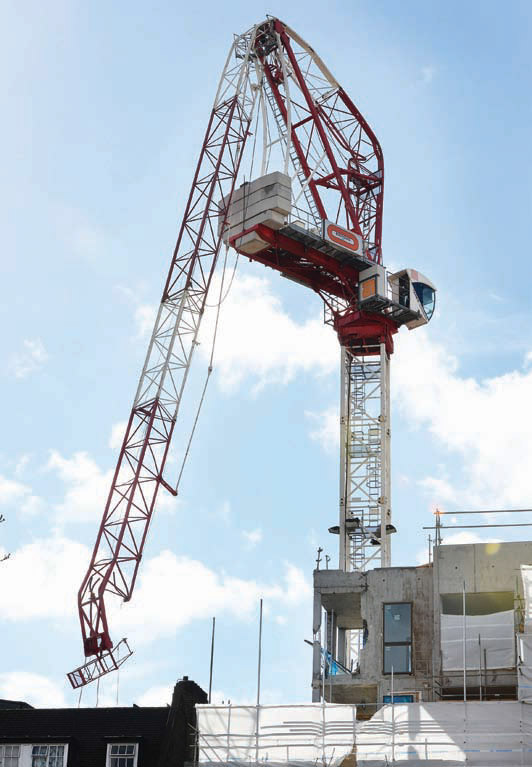 A crane that was bent backwards at a construction site in Greenwich, south east London, recently, following high winds brought on by Storm Katie. 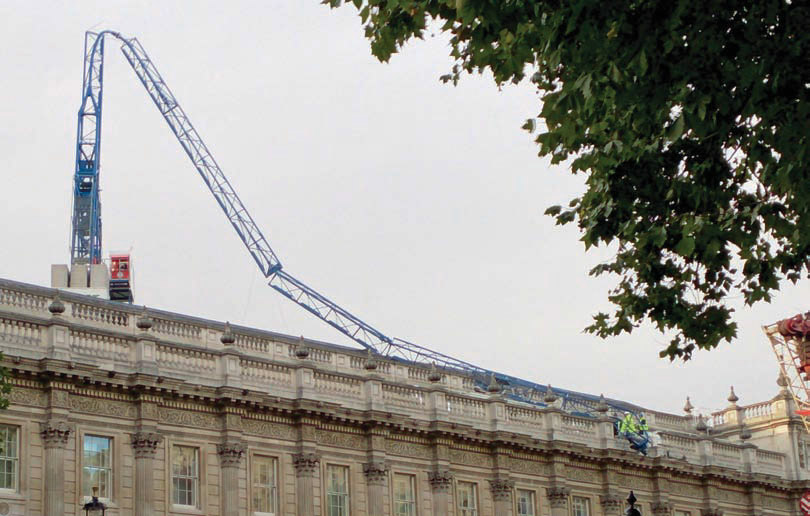