Lattice boom crawler manufacturers have recently updated and enhanced their portfolio, but for classes that competition from telecrawlers is lower. Sotiris Kanaris focuses on the market for capacities of 300t and lower.

The demand for crawler cranes below 100t capacity varies considerably around the world. In some markets the demand remains strong, while in others it has been extremely affected by the increased popularity of telecrawlers.

“The smaller size classes (below 100t) have shown significant increase in Asia. In recent years the “very small” crawler cranes (below 60t) have increased most.

Approximately two out of three of all cranes sold are below 100t crane capacity,” says Wolfgang Pfister, head of strategic marketing and communications at Liebherr- Werk Nenzing.

The effect on sales was such that Kobelco decided to alter its offering for the European market. Mark Evans, sales and operations manager at Kobelco Construction Machinery Europe - Crane Division, says that from 70t and lower the market in Europe has virtually become a telecrawler market. “We used to make a 60t machine for the European market called the CKE600, we no longer manufacture it. The telescopic boom crane has impacted the market for that model, so we now start at 80t with our CKE800 model.”

Scott Knight, product manager lattice and telescopic crawler cranes at Link-Belt, also finds that the 70t lattice boom crawler class has really diminished. “Years ago the 138 HSL, our 80USt (73t) machine, was our best-selling crawler crane. Now the market has been taken over by 70t or 75t telecrawlers.” He adds that the telecrawler has already become the machine of choice for all capacities below 100t.

“I see the telecrawler market expanding further,” he continues, “I tell people for years now ‘Who would have ever thought that an all terrain crane would replace the lattice truck crane?’ For years no one thought that could happen, but it has. Am I saying that telecrawlers are going to replace lattice crawlers? No, not at all, but it is going to become a harder decision to the end user as telecrawlers evolve to larger capacities.”

At Link-Belt they find that the 100t (110USt) class was the most in-demand in the US over the last five years. Knight believes that in terms of overall sales volume, the 100t class will remain the most popular domestically, despite factors negatively affecting demand. Some of these factors cited by Knight are: lower oil and gas exploration, low infrastructure investment and increased number of units in the secondary market. Seeliger says that the 100t and 150t classes have been successful regardless of economic downturns due to the broad range of applications the machines can be used in.

He adds that Manitowoc’s 100t MLC100-1 has been popular since its introduction. “This can be attributed to the straightforward approach of this product, making it an operator friendly, reliable and competitive machine in the prevalent 100t class. The popularity of the MLC100-1 is tied closely to the market segments the 100t class works in. Many of the fielded MLC100-1s today are working in the infrastructure segment and others in energy and general construction.”

The most recent product launches or updates show that the manufacturers are focusing on capacities higher than the 100t, sometimes significantly higher.

“The MLC150-1 was launched after much discussion with our customer base and dealer network about the competitive 150t class. We anticipate the MLC150-1 will work primarily in the infrastructure segment, such as road and bridge projects. The MLC150-1 will also fit well into numerous general construction projects,” Seeliger adds.

Manitowoc has ten models with capacities of 300t or lower. Technology has changed greatly in the Manitowoc line up over the years. One example is the Variable Position Counterweight (VPC). “Another example of a technological advancement that has benefited crawlers is in the Crane Control System (CCS). Using electric over hydraulic controls has greatly helped the ability to have finer control over the functions, as well as decreasing maintenance and providing more visibility for troubleshooting,” Seeliger says.

Another model that was launched this year is the HSC 175t SCX1800A-3. The main boom can reach 84m and the maximum main boom and crane jib combination is 75m + 31m. The manufacturer says the reason behind the choice of this capacity, was to meet customer needs for this class especially in East Asia.

As the successor to the SCX–2 series, the SCX–3 series features a number of new technologies. HSC has focused on making its models more eco-friendly. Apart from being powered by the high efficiency engine, the SCX-3 series cranes are equipped with an ECO winch and auto idle stop function to perform operations using less fuel.

Safety has been enhanced through the ML anti-two block and the Swing restriction unit.

The manufacturer has also made transportation and assembly easier, taking into account regulations in different markets.

The Quick-draw function allows self-installing/removal of heavy crawler side frames. Machine operating condition can be monitored by remote sensing installed as standard.

The manufacturer has been investing in updating and enhancing its lattice boom crawler range. “We have lately updated the crawler cranes step by step to the latest stage 5 engine/ emission levels,” says Florian Attenhauser, public relations manager at Sennebogen.

At last year’s Bauma the manufacturer launched the 5500 G, which Attenhauser says has been very popular. This model is available in two versions, 180t or 200t. It has a hook height of 104m, 160kN winch and a 261kW diesel engine. The robust Star- Lifter crawler undercarriage gives the crawler crane a secure stand and it can also move easily under load.

“The first machines are already in operation all over the world. Customers appreciate the higher load capacity. Depending on the boom configuration, the working load values can be increased by between 15% and 50%, thanks to the newly developed and strengthened boom construction and the increased ballast. The new 5500 G, therefore, offers all customers an even wider range of applications,” he adds.

“Since the start of the Covid 19 pandemic we have seen a shift in demand towards larger machines. We have had a lot of enquiries for the 300USt class and we think that it is because there are maintenance jobs at refineries and power plants as well as large precast jobs still running during the pandemic,” Knight says.

Link-Belt’s 300USt (272t) lattice boom crawler, the 348 Series II, is their latest product of the range. It was first presented at the manufacturer’s Crane Fest in 2018, with the first units shipped shortly before this year’s ConExpo.

This model is a revamp of the 348H5; it has a Tier 4 final engine, as well as new features that provide improved transport and assembly.

“It has been very well-received by the market. There are numerous units in the field now and we have received very good feedback,” says Knight. He says that these units are mostly used to lift precast concrete and heavy steel.

Liebherr’s latest model is the 300t (330USt) LR 1300.1 SX, which was launched at Bauma last year. Pfister says that this model has been performing particularly well in the USA and Canada.

“The LR 1300 is one of the bestsellers in the range of crawler cranes and has been continuously redesigned – so it is not a complete new machine,” Pfister says.

This model belongs to the new generation of Liebherr lattice boom crawlers, which incorporate a range of innovations, mostly in electronic control and assistance system.

The LR 1300.1 SX features the ‘Boom Up-and-Down Aid’ assistance system, which indicates the approach to the tipping border and automatically stops operation before the operator unintentionally enters an unsafe zone. It assists the operator in leaving the danger zone without having to activate the safety bypass switch.

The new model is fitted with wind sensors on the main boom and jib. Both the measured wind speed and the actual crane configuration (boom length, boom angle) are taken into consideration when calculating the current hazardous situation for the crane.

The ‘Ground Pressure Visualization’ of the new Liebherr crawler crane LR 1300 SX calculates the current ground pressure of the machine in real time and compares it with the specified safety limits of the relevant position.

Three different driving speeds can be selected by the crane operator. Driving is always carried out in “Safe Mode” with active Load Moment Limiter, and is dependent on the driving speed.

“For heavy loads, the crane can be fitted with a derrick boom in combination with an additional counterweight. The new suspended counterweight of the LR 1300 SX no longer has a fixed counterweight radius and instead can simply be hydraulically displaced. The load charts are calculated automatically, there are no interpolations allowing for a maximum flexibility on the job-site; each position is possible,” says Pfister.

The LR 1300 SX is fitted with a newly-designed cabin and is approved for personnel lifting. Liebherr offers six models of lattice boom crawler cranes with capacities of 300t or under, the smallest one of the range has a capacity of 110t.

In Europe, the 100t CKE900G-3, the 150t CKE1350G-2 and the 250t CKE2500G-2 are all equally popular,” Evans says. As for the demand for the 100t machine, he explains that there are many contractors looking for cranes of this class. “It can travel with the tracks on in the UK. This means that the crane is available for work almost straight away, you just have to build the boom and away you go. It is very compact, its superstructure is less than 3.5m.”

“In the US market we sell Tier 4 machines, the US will go straight from Tier 4 to Tier 6. Europe goes to Tier 5 and we have already started to deliver Tier 5 machines into Europe,” says Evans.

He adds that there have been a lot of enquiries for Tier 5 machines in the region because they are heavily stipulated by government contracts. 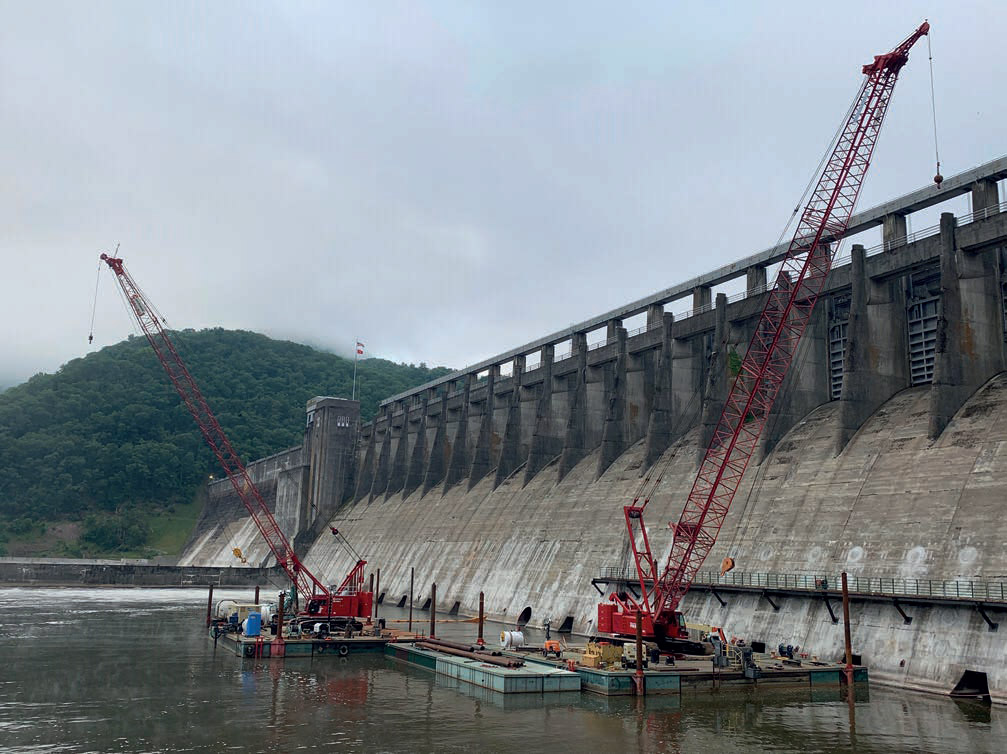 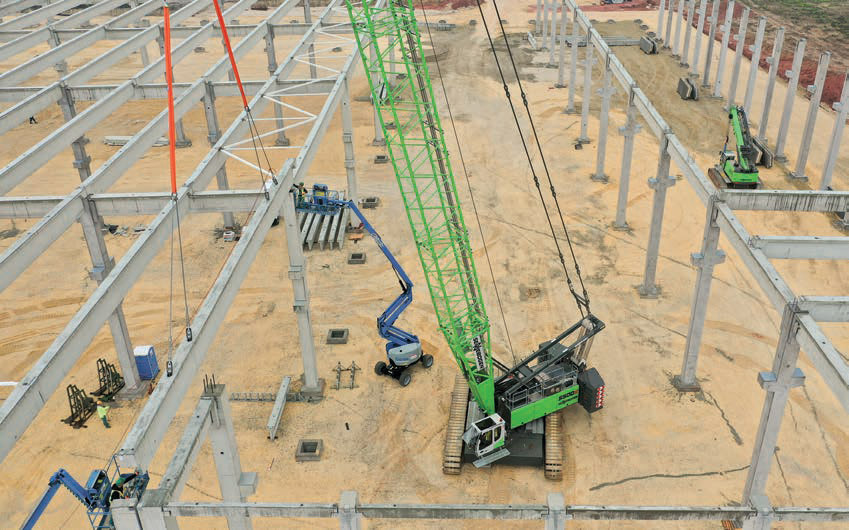 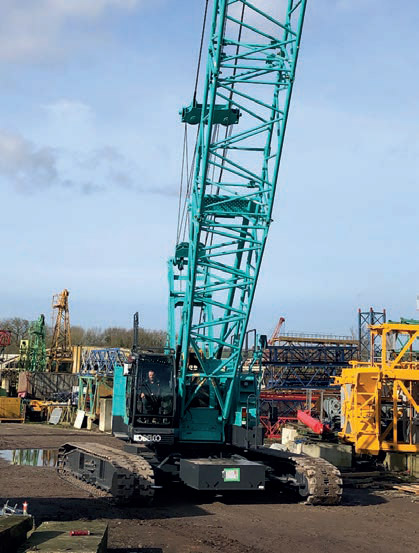 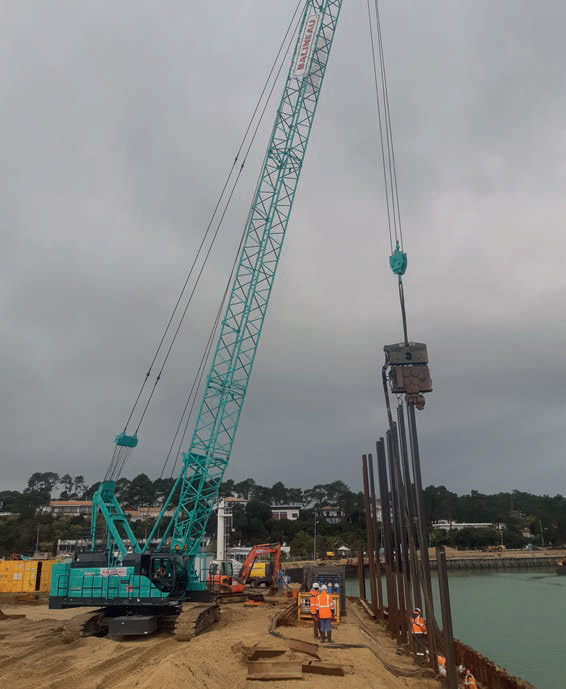 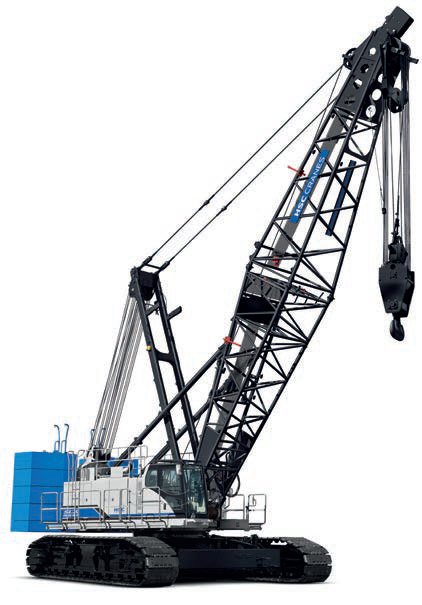 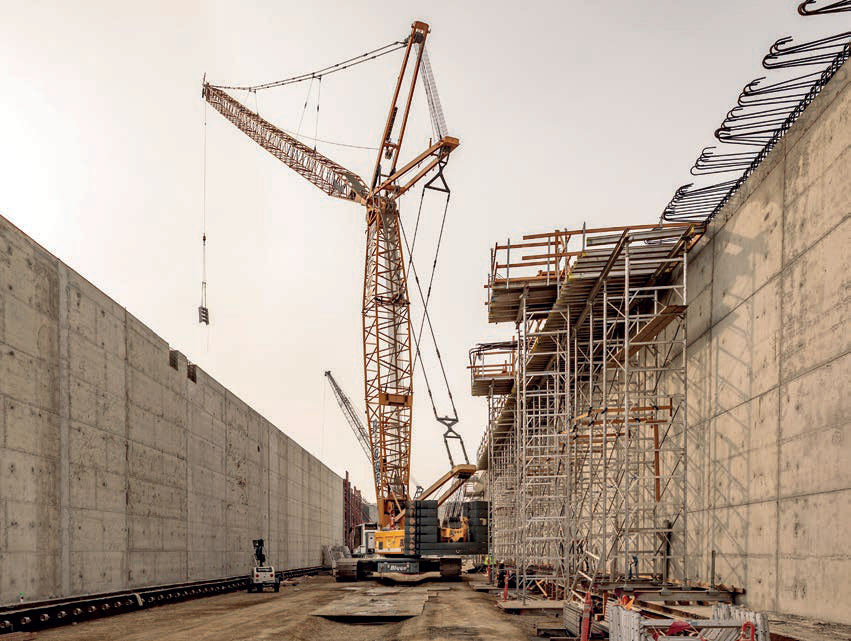 A Liebherr LR 1200 from Bigge Crane and Rigging’s fleet at work. 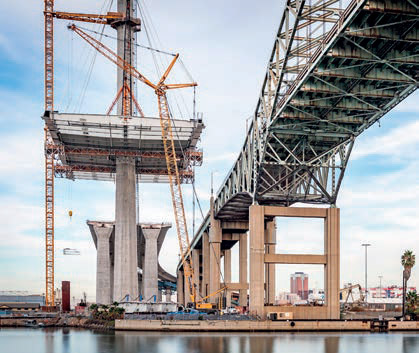