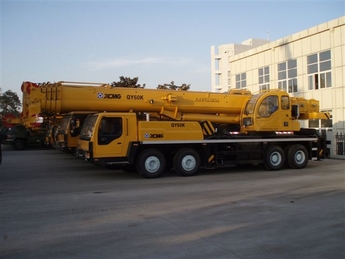 The cranes have been re-rated from 75% to 85% of capacity, as is customary in the USA.  The cranes have carriers with anti-lock brakes, and US-made Cummins engines, Eaton transmissions, Rexroth hydraulic pumps, PAT computers and Vickers hydraulic control valves.  The crane itself is made from Weldox 960 Swedish steel.   Standard features include air conditioning in upper and lower, two winches, two-man carrier cab, two-stage bifold fly jib, outriggers whose pads fit into a holder in the carrier, and joystick crane controls with detents.  Other modifications to suit the North American market will be made by Can-Pick in Canada, but in the future will be made in the XCMG factory itself, Mewhinney says.

Intensus will be stocking a supply of switches and sensors, though XCMG claims to be able to ship most parts within 24 hours direct from the factory in Xuzhou, Jiangsu province, China.

Can-Pick is selling the cranes on a one year, 2,000-hour guarantee.   The first 60K machine is going to crane rental firm Snyder Crane.  A three-axle 30K with 40m (130ft) powered boom is going to construction contractor Brent Petroleum.  Both are expected to be delivered in June or July.  Can-Pick is currently looking for dealers, who will receive the cranes at a discount.  Mewhinney says he expects the 60K to sell at full price in the mid $400,000s: "The way we're looking at it, a 75 US ton is not going to cost much more than a 40 US ton Terex."  He claims delivery times of 90–120 days from order.

Mewhinney's father, Lorne Mewhinney, started Can-Pick in the 1980s.  The company sends out union operators with its 22 cranes, a mixture of crawlers, truck and ATs.  "Everything we own is for sale, the same as any big rental house," Rob Mewhinney says.  This month it starts providing cranes for phase two of the Niagara Tunnel project.  It won the XCMG contract after it tried to buy a crane it saw at the Conexpo show in Las Vegas.