The 175ft (53m), 125,000lb (56.7t) pedestrian bridge is part of a multi-phase north side campus expansion project and ties into the Phase III expansion started in 2011. Due to the location of the bridge and how it integrates into the multi-phase expansion, the bridge needed to be placed prior to the start of any of the Phase V structure, scheduled to begin construction in 2022.

Wagstaff Crane Service was subcontracted to unload, assemble and place the steel pedestrian bridge in its final position. The jobsite presented challenges as the work had to be carried out near a congested area of the hospital with heavy traffic on the side of the mountain.

The Wagstaff project management team considered a crawler crane for this job but it proved to be more costly for all parties involved. The team choice to deploy the company’s flagship crane, the LTM 1750-9.1 with the recent crane software upgrade. The improved load charts made this lift possible, without the upgrade the lift would have been over 90% of the total capacity.

Ronnie Wagstaff, project manager for Wagstaff Crane Service, said: “We were planning for this lift about a year before this took place. Numerous different configurations had been drawn up including a proposal with plans showing a critical lift at 93%. The option to bring in a large crawler crane was also considered due to the fact that the lift was taking place over a functioning hospital clinic with close proximity to power lines, and active life flight helicopters. These risks coupled with a critical lift made some nervous to proceed, until the update was released, and we could present a new and improved lift plan that showed a safer lift.”

“A combination of limited site space, constrained site access, fully open facilities adjacent to and below portions of the bridge, weight and distance of the pick, as well as the need for several different configurations for the offloading and ground pre-assembly of the bridge at close radius to the crane and setting of the support steel on the north east side of the Phase 3 building, were all determining factors in the use of the LTM 1750 for this project,” Wagstaff continued.

The nine-axle LTM 1750-9.1 was driven to the site with equipment installed and an additional 11 truckloads of parts were needed. The crane was assembled and ready to work in approximately 12 hours.

The newest software update allows this model to hoist even heavier loads. Liebherr says the use of refined static calculation methods enables increased lifting capacity values across the entire working range. The LTM 1750-9.1 has entered into a higher lifting capacity class due to the new luffing jib configuration used for wind power applications. During this project “several lifts that were critical – 90% or above, were reduced to 85% or lower,” said Wagstaff. 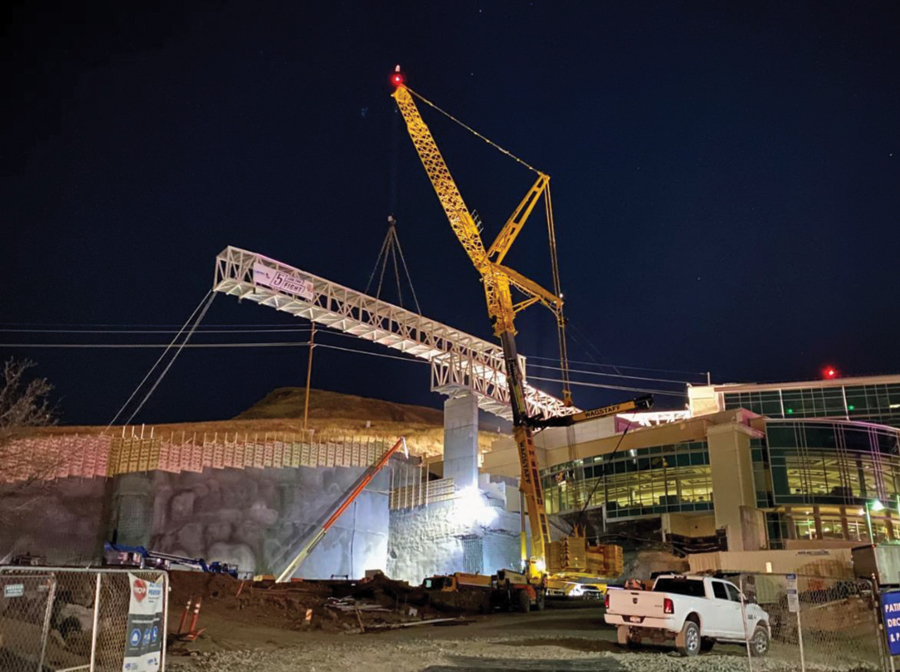