HSC Cranes and Link-Belt, which are both subsidiaries of Sumitomo Heavy Industries, shared a stand at this year's Bauma. Will North spoke to Satoshi Hamano, the new head of HSC’s dedicated crane sales operation, during a handover ceremony for the new SCX2800A-3.

The SCX2800A-3 is HSC’s newest crawler. With a capacity of 275t, it fits a gap in the market between rival cranes of 250t and 300t capacity; at the same time, the Japanese manufacturer’s engineers have kept the crane’s dimensions within those of rival lower capacity 250t machines.

The company celebrated the sale of the first two of these machines, to Scottish crawler rental specialists Weldex and tunnel engineering experts Joseph Gallagher at the show.

Rees also saw new opportunities for Link-Belt. The Kentucky company recently launched one of the biggest telecrawlers in the market, the 250USt (227t) TCC- 2500, and showed it at Bauma. Rees says this crane would be well suited to major infrastructure projects.

Satoshi Hamano is heading up the new operation. He pointed out that HCME’s business and distributor network, with its focus on excavators, is very different to that of the crane industry. While the company will be continuing to work with five existing distributors, it will be looking for crane specialists in new markets across Europe. Parts supply and aftersales support will continue to be handled directly by HSC through HCME.

The new SCX2800A-3, as well as fitting into a capacity gap in the market, also completes the company’s transition to Tier 4 engines in Europe. But, as has been the case for a long time in this industry, the company’s engineers are being kept busy as they prepare for the introduction of Tier 5. The company will next March introduce the first of these machines, an upgrade of the 55t SCX550.

Hamano says the UK and the Netherlands are leading markets for the company, while France has proved more challenging. Recently, the company celebrated a landmark sale in Denmark, with an order of a 100t SCX1000A-3 to MT Højgaard. As he builds HSC’s European sales network, and as the company develops Tier 5 models, Hamano will be looking for more deals in new markets like this. 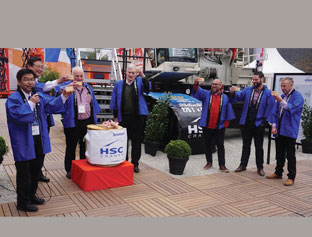 Dougie McGilvray of Weldex (third from left), and Joseph Gallagher (fourth), of the eponymous civil engineering firm (and parent company of NRC) celebrate their purchases of new HSC cranes with a kagamibaraki sake barrel breaking ceremony.