Construction companies Demathieu Bard and Costantini entrusted Martifer with the manufacturing of the structures.

A complex ground preparation was required at the edge of the stadium for the Demag CC 3800-1. "With two layers (7m+5m) of 20-cm-thick Bongossi timber, we provided sufficient support for the crane," said Demathieu Bard site manager, JulienCavelius.

The complex ground preparation required the use of 18 truck transports for the necessary material and 55 transports for the crane itself. "Since we brought eight to twelve transports to the construction site per day, just three Sarens employees using two assist cranes were able to assemble the crane ready for use in five days," said Cavelius. Once the assembly work was completed, there were two more days for acceptance and testing, so the crane was ready for lifting after seven days.

The Sarens team set up the crane in SWSL configuration with 60m main boom, 36m Superlift mast and a 24m-long luffing jib for the demanding lifts. The counterweight on the superstructure weighed 165t, and the Superlift counterweight up to a maximum of 325t, depending on the loads to be lifted.

The Demag CC 3800-1 was thus able to lift the four steel structures, each 45m long, 25m wide and 14m high, and weighing up to 242t. The crane first lifted the components to a height of 16m so that it was possible to move them over a row of trees at the edge of the stadium. The crane operator then slewed the load over the trees and lifted it by a further 13m to 29m. This provided enough height to be able to slew it over the stadium’s existing stand and, with the help of signal people, lower it exactly to the place where it was received and anchored by the Martifer technicians. 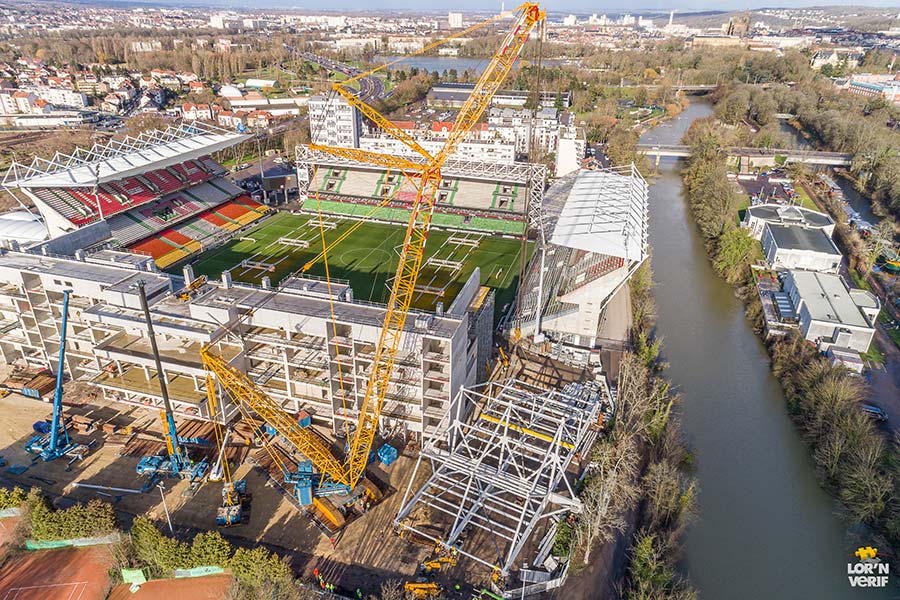