ITER stands for International Thermonuclear Experimental Reactor. It is an international research project that has the goal of generating power from fusion energy and that is being run by the EU together with Switzerland, the USA, China, South Korea, Japan, Russia, and India. The reactor has been under construction since 2007 next to the Cadarache nuclear research center in Southern France.

The conditions for this demanding project were anything but simple: On one hand, the strictest job site requirements and on the other the limited space conditions on the ITER site.

“The two cranes met all the prerequisites for being able to efficiently complete the demanding lifts for the unwieldy components: They’re compact, they have a fast working speed, and they can be operated in a reliable and precise manner. In addition, they are characterized by an extraordinary ease of assembly, meaning that they could be set up very quickly despite the tight space conditions at the site,” said Paolo Delfino, general manager of Vernazza Autogru in France.

The cranes completed their journey to Saint-Paul lez-Durance in two stages: The first was a trip on a ship to Fos-Sur-Mer, after which they were taken by truck on public roads all the way to the work site. Once the two cranes were at their destination, five Vernazza assembly technicians set them up with the help of a Demag AC 120 all terrain crane in a mere five days, right in the middle of the work site.

“With these configurations, our two Demag cranes were prepared to carry out the lifts,” Delfino said. To do this, the two cranes split their duties: The CC 2800-1 picked up the roof structures and then swung them to the CC 3800-1, which then took them and lifted them to the required final position so that technicians on work platforms would be able to fasten the parts.

“We lifted one of these components every day, meaning that our cranes and our ten-person team spent a total of four months at the work site,”  Delfino explained. Vernazza was able to adhere to the strict project timeframe despite the challenging work site conditions. 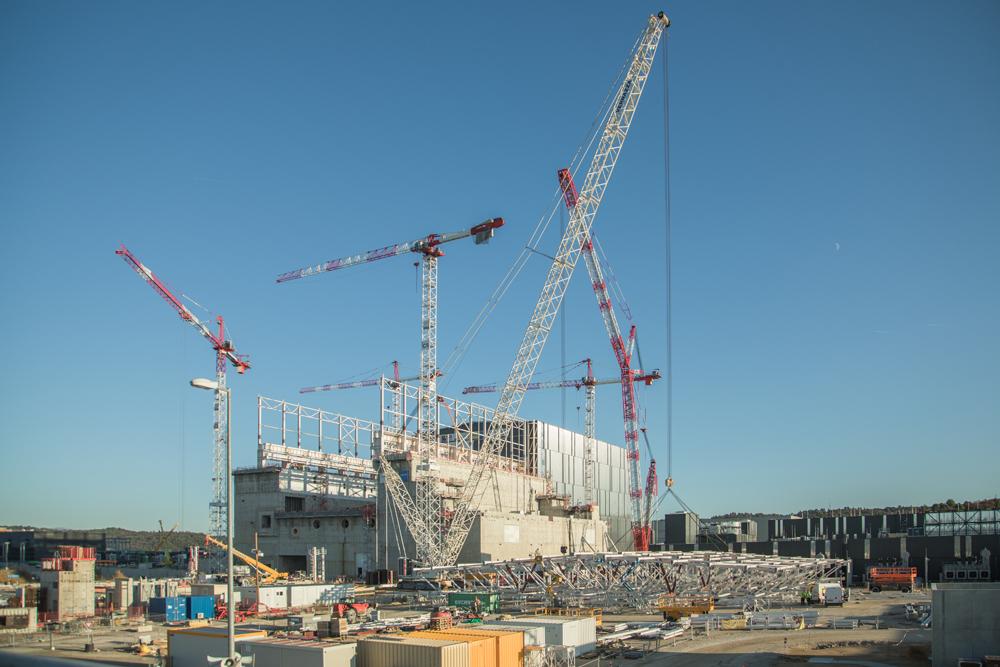