A new combined cycle gas turbine power plant is being built for PKN Orlen northwest of Warsaw. Components for the project needed tobe transported from five different locations, travelling up to 5,000km.

"The K-turbine, generator and turbine rotor and two housing parts came from the Siemens factory in Mülheim,North Rhine-Westphalia", says Boris Albl from Felbermayr at Nuremberg. At the early stages of the project, the company needed to makesome changes due to flooding. With a total weight of around 900t, the components could not be put on a coaster atMülheimas planned, but had to be transported by barge to Nordenham at the mouth of the Weser river to the North Sea.

The gas turbine temporarily stored in Nordenham was placed with the exhaust diffuserto transport the components from Mecklenburg and Pomeranian Bay to the next reloading point.

Due to the delays the shipyard crane was no longer available. This is why the voyage continued on the Vistula estuary up to Gdansk. A 600t floating crane from Bremerhaven needed to be ordered because there was nocargo handling equipment available to load the heavyweight high-tech components. Thus, the components could still be transshipped onto waiting pontoons on schedule.

Rolling into further obstacles, the company had to face another challenge with the permanent undercutting of the unloading platform by the river, which didn't meet the static requirements.

The solution was the use of four pile systems that reach10m underground in addition toplacing two concrete foundations to the left and right of the ramp.

A rail mounted lifting frame was positioned on this ramp. "This enabled us to safely transfer two 500t components,after being transported from the ship by hydraulic displacement tracks. Subsequently, the gas turbine and generator were transshipped onto a 1000t Krefeld self-propelled modular transporter by a lifting frame," explains Albl.

To safely pass a structurally compromised bridge, the 500t generator and the gas turbine were transported on an 18-axle self-propelled transporter in a four-file configuration. Three consecutive roundabouts represented the major obstacle for the 30-metre long vehicle. Thus, the self-propelled modular transporter, (SPMT)was strippeddown to ten axle lines after the bridge.

Before reaching the parking area, there was another serious challenge, a low-lying pipe bridge was on the way of the entire 7m high load. It was possible to transport the cargo under the pipe bridge, using the rail mounted lifting frame oncemore. The transport team had more favorable conditions at another pipe bridge. "We were able to continue without employing extensive technical measures, the SPMT was hydraulically lowered to its lowest possible ride height of 1.2m", saysAlbl. The remaining components were reloaded thanks to two 500t mobile cranes. The SPMT was reduced to eight-axle lines and that was sufficient to deal with the maximal 133t weights. The temporarily stored components will be moved into the machine building from mid-May.

In addition, capacitor parts weighing a total of 280t travelled approximately 300 km on the road. These shipments were delivered using conventional semi low-loaders.

In the next phase, a transformer weighing 277t and two phase shifters weighing 110t per each, will be delivered by Felbermayr. The approximately 1000 km journeys start at Siemens units in Weiz and Linz in Austria. "The success of this project isthe result of teamwork", says the project andbranch manager of the Nuremberg site. Following the arrival of the heavy cargo, the executive site manager for the client Siemens, says: "What a week and a day for Plock. All the heavy goods arrived safely at the job site. Special thanks to the Siemens Transportation Team and Felbermayr for doing such impressive work. 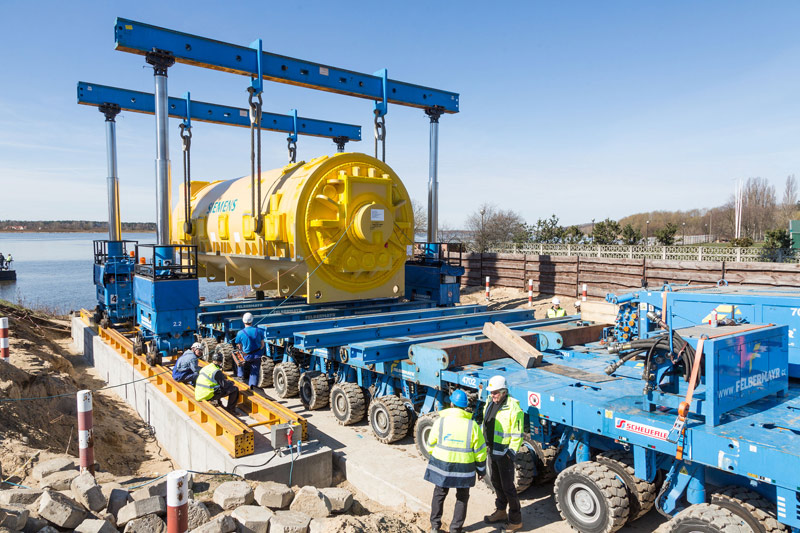