An accident in Gillingham, UK, demonstrated the importance of agreeing whether a client or lift contractor is responsible for planning lifting operations, says the UK Health and Safety Executive.

Two companies have been fined after a failure in communications led to an 80t mobile crane toppling over, narrowly missing workmen and a busy road, the UK's Health and Safety Executive said recently. The HSE's investigation found the lift itself was carried out unsafely as the crane was overloaded and being operated on poor ground.

South Coast Crane Hire Ltd and the principal contractors, JR Pickstock Ltd, appeared at Weymouth Magistrates court in mid-November, following an incident that happened on a building site in Fernbrook Road, Gillingham, on 18 August 2009 during construction of a new nursing home.

As a result of the lift itself being carried out unsafely, the 80t crane overturned and its extended 50m jib fell across the site, narrowly missing the workers and a nearby road. HSE said a larger crane should have been used and ground mats were needed to spread the load of the crane's outriggers due to the poor ground conditions.

South Coast Crane Hire pleaded guilty to breaching Regulation 8(1)c of the Lifting Operations and Lifting Equipment Regulations 1998 and was fined £10,000 ($16,000) and ordered to pay £14,917 ($24,014) in costs. JR Pickstock Ltd pleaded guilty to breaching Regulation 23(1)a of the Construction (Design and Management) Regulations 2007 and was fined £16,000 ($25,759) and also ordered to pay £14,917 ($24,014) in costs.
The court heard the crane was supplied and operated by South Coast Crane Hire but confusion arose as to whether the job had been set up as a crane hire only or contract hire basis, where planning of the lifting operation is included.

This resulted in planning of the lift being neglected by both firms and led to vital roles for the job not being assigned. In addition, important information - including the weights being lifted and ground conditions - were not passed on to the workers involved.

The court was told the lift hire contract should have met industry guidance, which says a competent person should be appointed to plan the lift. This person should be provided by the crane hire company if it is a contract hire arrangement or by the hirer if it is a hire-only agreement. The crane hire company should have ensured this happened when they set-up the contract.

A lift plan should have been drawn-up by the competent person and communicated to those involved in the work. The principal contractor should also have taken all reasonable steps to ensure the construction phase plan identified risks to health and safety and included measures to address risks.

"This incident could have led to death and serious injury and was a direct result of a catalogue of failures by two construction companies," said Kathy Gostick, HSE inspector, speaking after the hearing. "Good communications between all those involved in crane operations and all other construction activities is vital to ensure lifting operations are properly planned, particularly those involving the use of heavy mobile cranes working in a busy area such as a construction site."

Gostick added: "Had it been clearly established by both South Coast Crane Hire and JR Pickstock who was responsible for planning the lift when the lift hire contract was set up is highly unlikely that the crane would have overturned putting a number of workers and people on the road at unnecessary risk." 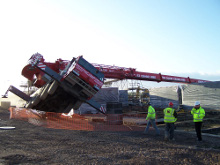